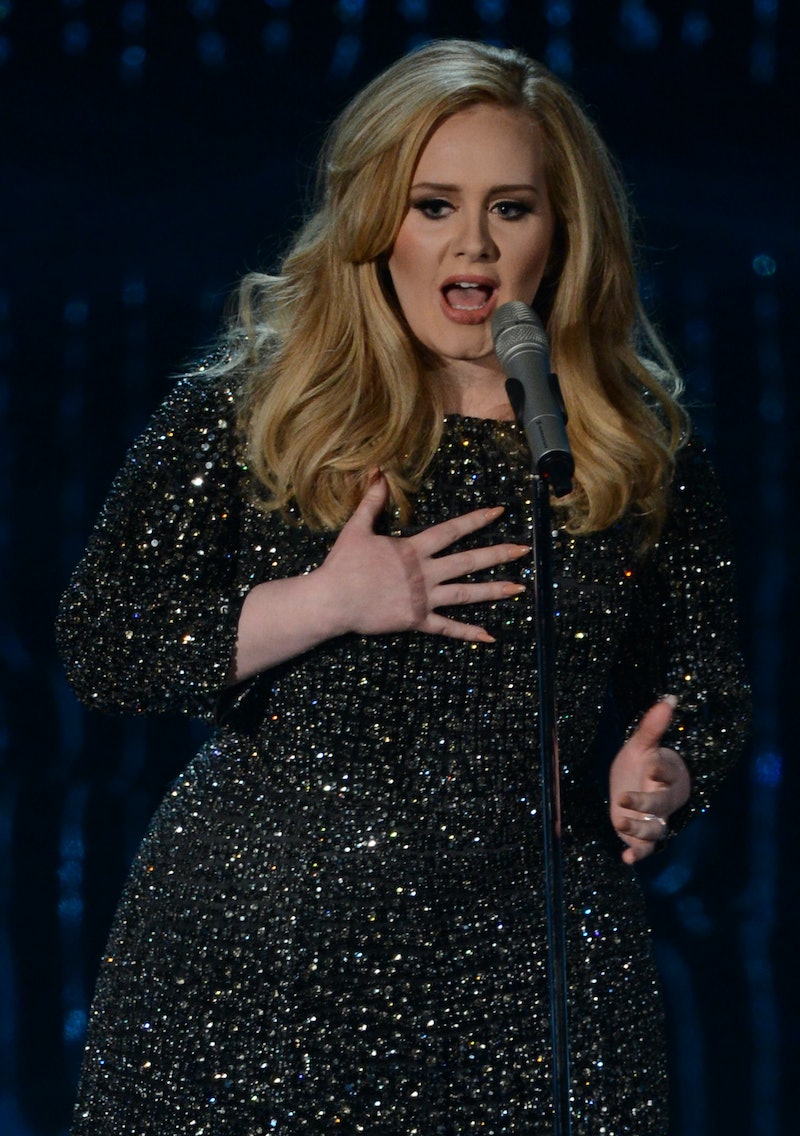 Adele's discography is filled with songs about boys who have broken her heart, but with the song "Sweetest Devotion," off her latest record, 25, she's singing about the one boy who was finally able to heal it: her son, Angelo. Motherhood is a recurring theme on Adele's album, but on this song she co-wrote with Paul Epworth — who she also wrote "Skyfall" and "Rolling In The Deep" with — she perfectly puts into words the bond that is shared between mother and child. On it she sings, "You will only be eternally / The one I belong to," flipping the notion that she's his caretaker. He's actually taken care of her, soothing her soul after years of feeling like she could never possibly love again.

After 21, which had her emptying out her heart (and our tear ducts) over her past lover, Adele also wondered if she'd ever make another album again. It took her four years to come back with a new collection of songs, but it was her son that got her itching to get back in the studio. "I don't know if I would've come back had I not had my kid," Adele told Rolling Stone, explaining that she didn't want him to miss out on knowing who she is and what she does. "I was like, 'I don't want to wait until my kid is 16 to show him who I am.' Because I'm very proud of what I achieved. And I wasn't, before I had Angelo," she said. "I didn't understand, actually, what I had achieved and how far I had come."

It was having this new person in her life that had her taking stock of who she was. It's likely why she referred to 25 as a "make-up album" because she was able to say goodbye to the parts of her past that she was holding on to, while also being able to forgive herself and start anew. I used to f*cking love the drama of all of it," Adele told i-D, "but now I'm a mum I only have so much head space. I've got to clear a lot of stuff the f*ck out, which is really therapeutic, 'cause I can really hold a grudge. Life is so much easier when you don't hoard your past."

It's this hindsight that Adele brings to "Sweetest Devotion," as she realizes how closed off you can still be while being honest. Her music gets at what we're all feeling, but every time she sings those songs, it also forces her to relive those painful moments. "There's something in your loving that tears down my walls," Adele sings, echoing this idea that she had placed a barrier between herself and everyone else. She could do that with her fans, choosing only to let us in on the parts of her she reveals in her lyrics, but she couldn't do that with her child; only give part of herself. Instead she's decided to give it all, orbiting her life around Angelo. "My kid comes first, and my music comes second — and I come second," Adele told Today.

On "Sweetest Devotion," Adele puts all of that conviction to wax, making it perfectly clear in nearly every line of the string-filled lullaby, which opens and closes with the sound of Angelo's excited voice, that she will be devoted to her son, now and forevermore. Her life is much different, and though his conception was unexpected — or as she sings on the track, came like "an explosion" — it was a necessary big bang to get her out of her own head. "The song is all about my kid," Adele told USA Today. "The way I've described it is that something much bigger has happened in my life. I love that my life is now about someone else."

Many of Adele's songs come from a place of sadness or anger, rarely are they about the happier moments in her life. But this song focuses on the joy of motherhood. Love comes in many different forms, but this is it at its purest. You can hear it in Adele's voice as she sings the bridge, "I’ve been looking for you baby / In every face that I've ever known / And there is something 'bout the way you love me / That finally feels like home." She goes on to list off the many warring feelings that go with being a first time mom, calling him her "darkness," her "hope," her "despair," the "right kind of madness," and her "everything, everywhere." Unlike her other songs, which often look at the past, this focuses on the future, which is much brighter than a badly broken Adele could have imagined in 2011 with the release of 21. Having a child at the age of 25 wasn't something Adele was planning to do, but it happened and it ended up being the best thing. “I find it funny that you’re the only one I didn’t look for," she sings. But, isn't that usually the way it happens? You find the greatest love when you finally stop looking for it.