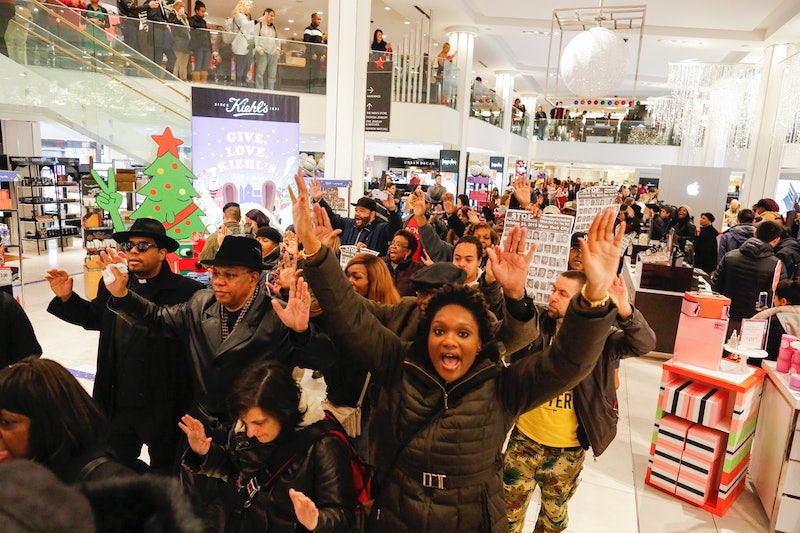 Black Friday has been a thing ever since I can remember. But, like all traditions, it comes from somewhere, even if you don't yet know the history of Black Friday. This much-anticipated, sometimes controversial shopping day celebrated immediately after Thanksgiving Thursday in the United States actually has an interesting and shifting explanation behind it.

First, let's start with what Black Friday is not. Thanks to the reliable research whizzes over at Snopes, we can dispel at least a few myths about Black Friday right off the bat. Though you may have heard otherwise, Black Friday doesn't have anything to do with the historical selling of human slaves hundreds of years ago. And while Black Friday sales certainly contribute greatly to many stores' yearly numbers, the name doesn't come from their ledgers moving from "in the red" (in debt) to "in the black" that day, either.

It all sort of started when, in 1939, President Franklin Roosevelt was pressured to move Thanksgiving up from the last week of November to the second to last Thursday. Americans had taken a cue on shopping after Thanksgiving from Canadian department store Eaton's and its post-Thanksgiving Santa Claus parade. Now, Depression-strapped retailers hoped that lengthening the Christmas shopping season, which had always informally begun after Thanksgiving, would give the ailing economy a boost. Much confusion ensued when the issue became political, and states diverged on which day was the proper Thanksgiving (and therefore when the shopping season would begin). But the shopping day itself didn't yet have its name.

As Snopes explains, early use of the term "Black Friday" for the day off after Thanksgiving can be traced to 1951, when it was used to refer to the apparent plague of Thanksgivingitis (almost like a black death or plague) that struck the workforce every year as workers called in sick. Though employers suspected that their employees were fudging it, it made more sense for many of them just to declare Black Friday an official holiday than to limp along totally understaffed.

Shortly thereafter, Philadelphia police began to use "Black Friday" to describe the bleakness of their day after Thanksgiving spent directing shoppers and football game-goers around town. The name caught on with other people who had to work that day, and with shoppers who (strangely) preferred it to retailers' attempted revision — "Big Friday."

Related shopping "holidays" have cropped up since Black Friday became extremely widespread around the 1980s, including Cyber Monday for the Internet shopping age, and Small Business Saturday, much loved by millennials. But Black Friday is the original shopping holiday, and its surprisingly complex political and commercial history means it's pretty real as far as holidays go, whether you choose to celebrate it or not.