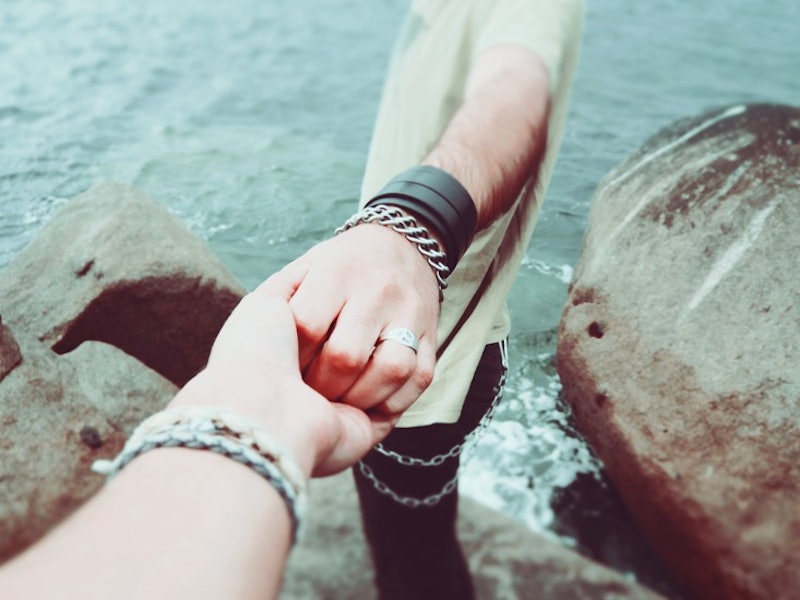 We at Bustle love giving you tips for how to tap into your sexual potential and troubleshoot when things aren’t going your way in the bedroom. But what about finding solutions to those stressful sexual health situations that inevitably crop up when you’re getting down? Emma Kaywin, a Brooklyn-based sexual health writer and activist, is here to calm your nerves and answer your questions. No gender, sexual orientation, or question is off limits, and all questions remain anonymous. This week’s topic: dating an HIV positive person.

Q: I’m freaking out. My partner of eight years and I just went to get tested together, and he came back positive for HIV and I came out negative. I don’t even know how we could have different statuses because I’m on the pill and we haven’t been using condoms in almost a year, but I’m really relieved I don’t have it. I love him so much, I don’t even care right now that he cheated on me and got this lifelong disease. I don’t want to leave him, but I don’t know how to help him or protect myself. What can I do? Will I definitely get it?

A: First of all, I want to recognize that that’s an intense situation to be confronted with. We all should go in for regular sexually transmitted disease (STD) testing, and it can be nerve-wracking for many of us, but most people going in for a routine test don’t think they’re going to come away with a positive test result. And then, getting a different result than your partner can be even harder if it brings issues of jealousy into the mix.

While both your situations may seem dire, the good news is that that’s not actually the case. There are a lot of ways to protect yourself against becoming infected with HIV, and your partner has many treatment options that can help him contend with his new chronic condition — and protect you in the process.

First of all, let’s make sure we’re all on the same page about HIV. HIV stands for Human Immunodeficiency Virus. That’s because this virus interferes with your immune system, weakening it so that it can’t fight diseases that enter your body and try to take hold and make you sick.

HIV is related to but distinct from Acquired Immunodeficiency Syndrome, or AIDS. AIDS is what we call the condition created by HIV. If you are diagnosed with AIDS, that means that HIV has damaged your immune system and as a result, you are getting sick because your body can’t fight back against other infections.

HIV lives in only certain human bodily fluids, and is transmitted into your bloodstream through only certain parts of your body. So to know if you’ve been exposed, you need to answer two questions: first, is there HIV present? and second, did it get into my blood?

Let’s say you know that the other person in question has HIV in their system. Just because they have it doesn’t mean you will get it. In order to potentially get their HIV into your system, you need to get it into your body through either a mucous membrane (which can be the lining of your vagina or anus, the tip of your penis, or the inside of your mouth depending on what parts you’ve got), a cut on your skin (it has to be pretty big and actively bleeding — a papercut or old cut that’s healed aren’t risks), or straight into your bloodstream through sharing needles.

There are some main acts that can result in fluid and site coming together, resulting in a potential infection. The main ones are having unprotected sex (we’ll get to protection tools later) with someone who has HIV and sharing needles with someone living with HIV when you inject drugs. HIV positive mothers can also transmit to their babies through blood during pregnancy and when they give birth, or during breastfeeding through breastmilk.

Knowing how this virus is transmitted is what you need to protect yourself against it (if you’re HIV negative) or protect others from becoming infected (if you’re HIV positive).

You can’t tell if someone has HIV just by looking at them. In fact, some people don’t know they are infected with the virus for years, because they haven’t noticed any symptoms. To know your status, you have to get tested.

However, some people experience symptoms in the first two to four weeks after they’ve been infected. These are usually described as an extremely bad flu — fever, a sore throat, headache, achy muscles and joints, and rash. This is called primary HIV infection, and what’s happening here is that your body is trying to fight off the HIV infecting it.

It’s extremely difficult to give an exact risk of getting HIV. That’s because it depends on a number of factors, including how much of the virus is in the other person’s fluids and how it’s getting into your body (through what site). The important thing to know is that while each time you have unprotected sex with someone who is HIV positive the likelihood you’ll become infected is pretty low (an estimated 0.08 percent if an infected penis goes into your vagina, an estimated 0.04 percent if your penis goes into an infected vagina, and an estimated 1.4 percent if an infected penis goes into your butt), those numbers are true every time you do that act. So the risk can pile up if you’re having sex with an HIV positive person multiple times. It’s also important to remember that you can get infected the first time you have sex with someone.

It’s also important to take into account the amount of virus in the other person’s blood. When someone first gets infected, the virus goes all spring break on your body while your immune system scrambles to retaliate. During this time of primary HIV infection, you have a lot of copies of the virus in your system, which means you are very infectious to other people. With proper medication and care, you can get the number of these copies very low, reducing the likelihood of transmission significantly.

5. How Can I Protect Myself?

The only foolproof way of not getting an STD is not having sex in the first place. Since that’s not how most adults operate, the good news is that there are an increasing number of ways you can protect yourself against becoming infected with HIV, while still being able to connect sexually with your HIV positive partner.

Latex and polyurethane condoms (both male/external and female/internal types) are a literal physical barrier against HIV — the holes in those materials are too small for the virus to get through. However, the same isn’t true for lambskin condoms, which are more porous and allow HIV to pass through.

Possibly the most exciting and definitely the newest prevention tool available is Pre-Exposure Prophylaxis, or PrEP. PrEP is kind of like the hormonal birth control pill but against HIV transmission, not pregnancy (so … sperm transmission?). PrEP is a pill you take every day, and if you do that you can be protected from HIV by up to 99 percent.

If PrEP is like the birth control of HIV prevention, then Post-exposure Prophylaxis (PEP) is like Plan B, or the morning after pill. You can start PEP within 72 hours of a potential exposure to HIV — such as a condom breaking, finding out your partner is HIV positive after you’ve slept with them, or experiencing sexual violence. PEP is a medication course of 28 days, and you need to complete all 28 days’ worth of pills. This solution isn’t 100 percent effective, but it does cut your risk for becoming infected significantly.

It’s easier for HIV to be transmitted in certain situations, like if you already have another STD, or bacterial vaginosis. So if you have an STD already, get it treated (if it’s curable) or learn how to manage it (if it’s one of those pesky ones you have for life).

In addition to keeping themselves healthy, your HIV positive partner’s treatment plan can also help you stay HIV negative. This is called treatment as prevention, and it works because the less of the virus someone has in their system, the harder it is for them to transmit it to someone else. In fact, an extremely exciting recent study found no instances of transmission between partners when the HIV positive partner’s viral load count (the number of copies of virus in their blood) was less than 200 copies per ml of blood (called an “undetectable” amount).

So if your partner takes their medication and gets their viral load count down, they are also helping your health! Everybody wins.

There’s a ton of literature out there and many professionals that can speak to you at length about the ways to support someone who is dealing with being HIV positive. I’m not going to go into all of them. Instead, I’ll just say that the number one way to help someone who has just found out they were diagnosed with HIV is to support them — however they want. Ask them. If they don’t know, give them the space to let them figure it out, just as you would any other challenge they go through.

Something you can do more pragmatically is help them get into treatment (if they want your help). Research has found that starting antiretroviral therapy (HIV medications) immediately after you’re diagnosed with HIV is extremely helpful for long-term health. You can also help them set up a reminder system so they remember to take their medication, because it’s important that they take their antiretrovirals as directed — otherwise their viral load count can rise, they can become resistant to the medications they’re on, and their health can decline.

There’s no denying that HIV is not something you want. If you have it, you have to take medication every day (or sometimes more than once a day) and deal with having a chronic condition. But really, it’s not all that different from any other chronic disease, like cancer or diabetes — except for the immense stigma associated with it.

The reality is, many people live with HIV for many many years, and many of those people are partnered with people not living with HIV. These couples are called serodifferent or magnetic (because of their (+) and (-) statuses, which is pretty cute). Pairing in this way has worked for many couples and it can work for you too!

More like this
What Is "The Ick?" The TikTok Dating Term, Explained
By Courtney Young
5 Crystals To Manifest Better Sleep
By Megan McCarty
Where Did The TikTok Term “Sneaky Link” Come From?
By Courtney Young
6 Abortion Advocates To Follow On TikTok
By Sara Youngblood Gregory
Get Even More From Bustle — Sign Up For The Newsletter