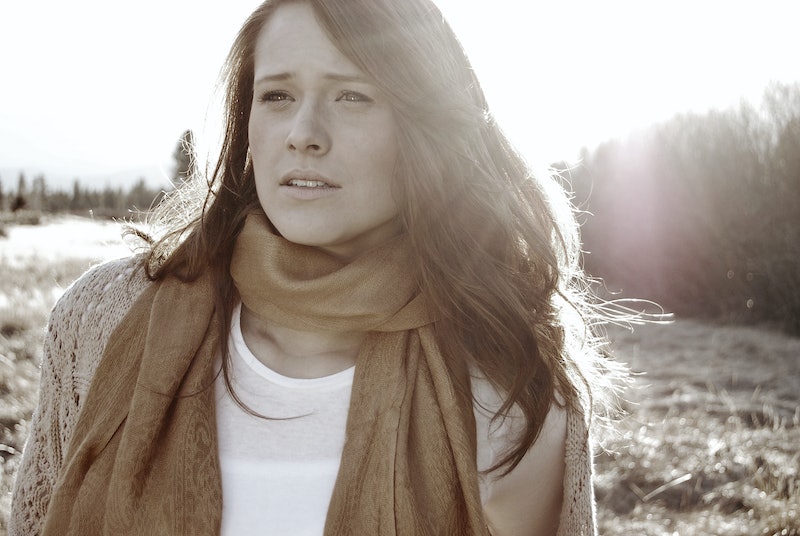 We at Bustle love giving you tips for how to tap into your sexual potential and troubleshoot when things aren’t going your way in the bedroom. But what about finding solutions to those stressful sexual health situations that inevitably crop up when you’re getting down? Emma Kaywin, a Brooklyn-based sexual health writer and activist, is here to calm your nerves and answer your questions. This week’s topic: when you should take Plan B.

Q: I was having sex the other day, and after we were done I realized my NuvaRing had fallen out. My boyfriend drove me right to the pharmacy and I took the morning after pill (and felt like death for the next two days), but it got me thinking — did I need it? How long does it take after my ring falls out for me to start being fertile again? And what about other methods of contraception? Is it all immediate that you're at risk, or do the hormones/other birth control stuff stay in your body protecting you for longer?

A: Great question! There’s a lot of mystery and confusion about how long a method of birth control actually protects against pregnancy after you stop using it. If you skip a pill, can you actually get pregnant the next day, or is that just your doctor trying to put the fear of God/babies in you? If your ring falls out during sex and you happen to notice, should you stop right away or are you protected for those last few minutes? Each method of birth control is a bit different, so let’s look at them all separately.

How You Might Get Pregnant In The First Place

During sexual excitement, the penis gets engorged with blood, making it hard and a spectacular implement to shoot the sperm far away from the testes. This is called ejaculation. Fun fact: during ejaculation, between 100 and 300 million sperm get shot out of the penis at the extremely fast rate of 28 miles per hour. If ejaculation occurs when the penis is inside a vagina, the sperm end up in the vaginal canal, where the lucky (non-directionally challenged) ones haphazardly make their way up through the cervix and into the fallopian tubes.

Now we leave the sperm (hang out little buddies, we’ll be back to you in a moment … go talk amongst yourselves) to talk about the egg. Each month during ovulation, a mature egg is released by an ovum into the fallopian tube. If no sperm show up within the 24 hours after the egg is released, it disintegrates. However, if there are sperm present (welcome back to the discussion sperm! happy to have you), one sperm — and one sperm only — can penetrate the egg wall.

And that, boys, girls, and those who don’t identify with either side of the gender spectrum, is conception. The resulting cell (called a zygote) travels down to the uterus, where it implants in the uterine lining and over the course of nine-ish months grows into a tiny human able to live in the world.

As you may already be aware, you can't get pregnant all month long. Your egg is only around for 24 hours before it disintegrates. But while this may seem like it means that you can only get pregnant on the day you ovulate, that's not exactly the case. That's because sperm can live in your body for up to five days. So there's actually a much larger window of fertility.

If you don’t want conception to happen for whatever reason — you don’t feel emotionally ready or financially stable to be a parent, you don’t want to make a tiny human with the person you’re having sex with, you didn’t want to have sex in the first place, whatever — but you find yourself with sperm in your yoni, there is a medical solution. Emergency contraception is birth control that works after you’ve already had sex.

The most common available method is called Plan B or the morning after pill, and it’s a one-time dose of hormones you can take when you’re pretty sure you’ve been exposed to sperm and are in danger of becoming pregnant at a time when you don’t want to make a baby.

In the United States, we are extremely lucky because as of right now (Congress you BETTER not take this away from us) you can just walk into a pharmacy without a prescription no matter your age and buy a Plan B pill. You’ll probably have to pay around $50 — or you can go to a Planned Parenthood or similar clinic if you’re lucky enough to live in a state that hasn’t systematically dismantled healthcare for humans with vaginas, and they will give it to you for way less.

Depending on where you are in your menstrual cycle, the hormones in the Plan B pill (levonorgestrel, which is a progestin) can prevent or delay your ovaries from releasing an egg, or can interfere with the ability of sperm to fertilize your egg. Some researchers also think that this hormone can mess with the lining of your uterus, stopping implantation of the embryo.

When Do You Need To Take Plan B?

This pill is extremely effective, but it's all about timing. It's important to take Plan B as soon as possible after unprotected sex — if you take it within 72 hours (3 days), it’s been shown to reduce pregnancy by up to 89 percent, but if you take it within the first 24 hours, that number goes up to 95 percent.

Something important to note: research has shown that Plan B is less effective in people who are over 165 pounds. If this is you, don’t worry — the copper intrauterine device (IUD) is another method of emergency contraception recommended for people this weight — if you get it placed within five days after unprotected sex, it can reduce your risk of pregnancy by 99.9 percent.

If You Were Using A Condom (Internal and External)

If a condom falls off or breaks, it's no longer doing it's job blocking sperm from getting into your vagina. If you end up with a broken condom on your proverbial hands, there are two scenarios to consider.

If the person wearing the condom feels that it’s slipped or broken before ejaculation, you can pretty much put on a new one and continue with your business. The one thing to worry about here is the presence of precum, which is the lubricant that comes out of the tip of the penis before ejaculation, and that some studies have shown contains sperm. So, up to you if you want to risk it.

If you don’t notice that the condom has broken until after ejaculation, you've definitely gotten sperm in your vagina and it's on its merry way to your fallopian tubes. If there's a chance you're fertile and there's an eggie waiting in your tubes, then it's best to get Plan B as soon as you can — because remember: its effectiveness decreases over time.

If You Were Using A Diaphragm

If your diaphragm slips out of place, it’s no longer doing its job to keep sperm out of your reproductive organs, and it’s possible you can get pregnant. In fact, you’re supposed to keep your diaphragm in for at least six hours after you have sex, to make sure that no swimmers make their way into your tubes to canoodle with your egg. If you notice after sex that your diaphragm has slipped and you're at a fertile time of your cycle, it's a good idea to take Plan B as soon as possible.

If You Forgot To Take The Pill

Fortunately/unfortunately, depending on what your life goals are, your body is extremely resilient and reverts back to its natural hormone levels very quickly. If you skip even one dose, there’s a chance of pregnancy. If you have sex on a day you've missed a pill, it's suggested that you take Plan B right away.

Additionally, you can take SOME brands of estrogen and progestin birth control pills as emergency birth control — you just have to double up. What you do is take the first pill as soon as possible after unprotected sex (the research says up to 120 hours, or 5 days), and then take the second pill 12 hours later. This method has been shown to be both safe and effective as a method of emergency birth control.

If your ring falls out and you don’t replace it within three hours, you can get pregnant. So if you are gettin’ busy and notice that your ring has fallen out, wash it off and stick it right back in there as soon as possible. If you don’t notice until more than three hours have passed, or something else happens that bars you from putting it back in within the allotted time (your dog eats it, it falls into the ocean, use your imagination), then you need Plan B.

The Pulling Out Method

The pulling out method is where partners engage in penetrative sex until just before the point of ejaculation, and then physically pull out so that the ejaculate goes … elsewhere (seriously, wash your sheets). If done correctly, no ejaculate inside the vagina = no pregnancy.

The main thing to know about the pulling out method is that it's actually pretty difficult to do correctly — you have to stop just when the passion is at its peak and do exactly the opposite of what your body wants to do: keep going. This method requires immense trust and communication between partners to ensure that you don’t get pregnant because someone was having too much fun and not paying attention. If you mess up and ejaculate gets inside you during a time in your cycle when you're fertile, then it's time to get Plan B.

No method of contraception is 100 percent effective. If you want to be completely sure you won’t get pregnant, don’t have sex. Since that’s probably not going to happen, because sex is one of the most amazing and fun things your body can do, we’re lucky that science has created and made available emergency contraception, for life’s little mishaps. Take advantage of it!

One thing to note though: definitely don’t use emergency contraception instead of any of the actual methods of birth control listed above. If you’ve ever taken Plan B, you probably know why — the hormones in the morning after pill are way stronger than in even high-dosage oral contraceptives, which means they can make your body feel way way worse. Side effects include nausea, abdominal pain, headache, vomiting, fatigue, and basically feeling like you’ve been steamrollered by a crew of raver elephants while simultaneously being poisoned from the inside out by tiny nefarious gnomes (come on, this can’t just be me).

The bottom line? Plan B is a powerful tool to keep in your prevention toolbox, but use it only in cases of true emergency. That’s why they call it emergency contraception!