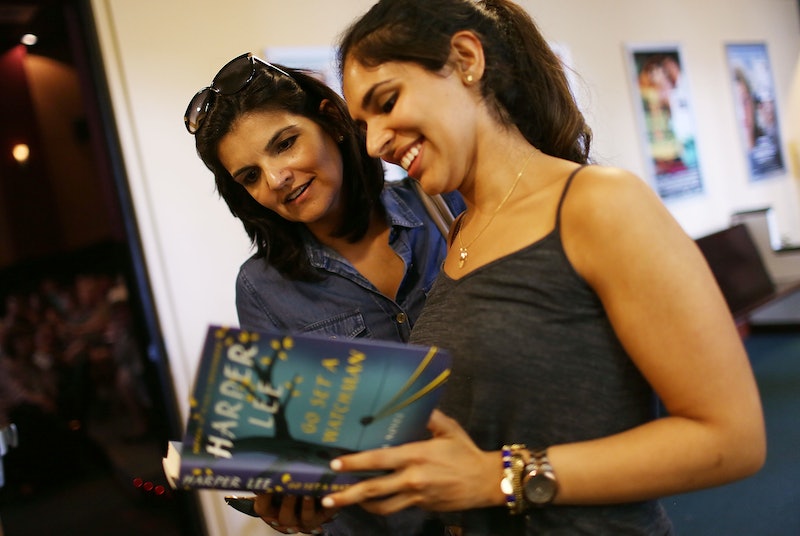 If you want to be the best Secret Santa or gift-giver in the world this holiday season for your favorite book lover, take note: Signed editions of Harper Lee's Go Set a Watchman are being released by publisher HarperCollins — but they come at a pretty penny. To have an autographed copy of one of the most controversial publishing events by one of America's best authors of all time, you'll have to dig into your holidays-dented wallet for $1,500.

HarperCollins will release only 500 signed editions of Go Set a Watchman to be sold at retailers across the U.S. If you can shell out the cash, the special copy is leather bound with gold-guilded edges and comes in a velvet-lined cloth box. Lee, who has been living in an assisted living facility in Monroeville, Alabama, signed sheets of paper over the span of a few months, which were then bound into the individual books.

Go Set a Watchman sold 1 million copies in its first week on sale back in July, and HarperCollins also expects these signed editions to sell out quickly, likely by devoted literary collectors.

The announcement that the To Kill a Mockingbird sequel was going to be published was met with major controversy earlier this year. Monroeville locals and Lee's friends questioned the iconic author's ability to consent to the publication, after her stroke back in 2007 and her prior comments that she never intended to publish a book again in her lifetime. Alabama officials opened and shut an elder abuse investigation into Lee's attorney Tonja Carter. For her part, Lee fought back against the rumors, saying, "I'm alive and kicking and happy as hell with the reactions to Watchman."

And the controversy didn't stop there. Once the book was published, many To Kill a Mockingbird lovers were surprised at hero Atticus Finch's portrayal in Go Set a Watchman ; he admits he once belonged to the Klu Klux Klan and fought against desegregation. (Whoa.)

However, all this controversy seems to only have escalated the extremely momentous publishing occasion, which means you'll have to be elbowing your way to the front in line if you want to get your hands on a signed edition for that book lover in your life (or yourself).

More like this
Jessica Simpson On The Time She Was Pursued By A Backstreet Boy & An *NSYNC Member
By The Editors
Netflix Shut Down 'Bridgerton' S3 Rumours About A “Very Dark” Storyline
By Bustle
We’ve Entered The Hot Boy Reader Era
By Samantha Leach
Love Is Blind’s Natalie Claims Shayne Signed Up For 'Perfect Match' While They Were “Still Together”
By Brad Witter
Get Even More From Bustle — Sign Up For The Newsletter
From hair trends to relationship advice, our daily newsletter has everything you need to sound like a person who’s on TikTok, even if you aren’t.