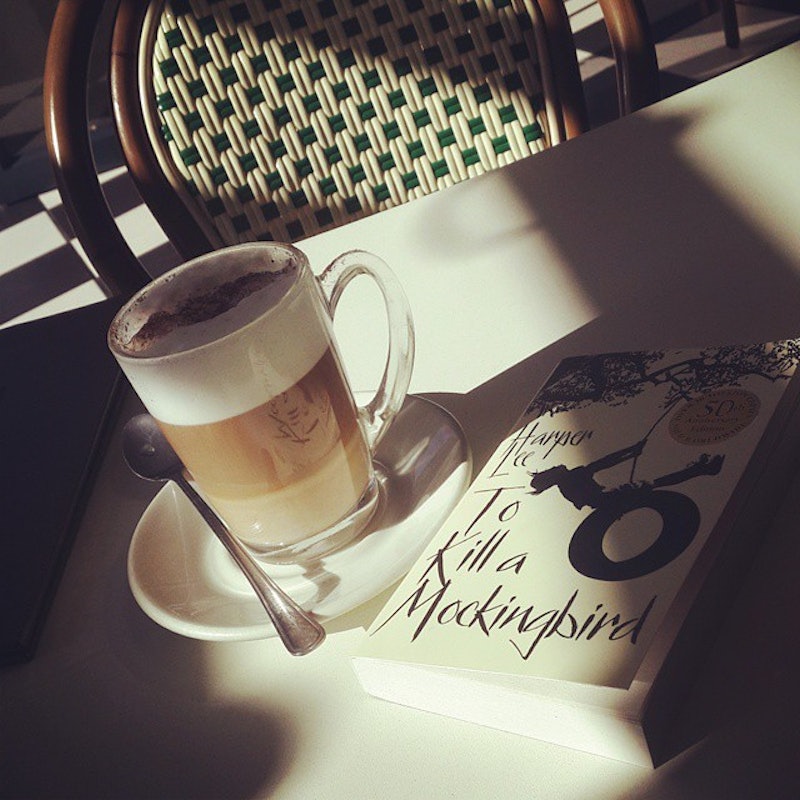 I can't believe I'm typing this right now, so bear with me, but the Associated Press is reporting that this summer the Harper Lee will publish To Kill a Mockingbird sequel Go Set a Watchman. In this day and age, everything gets a sequel, but I kind of see this as something more in the line of The Avengers than one of the greatest American novels ever written. No news yet on whether F. Scott Fitzgerald will return to Earth to publish The Great Gatsby 2: Electric Bugaloo.

The sequel to Atticus Finch, Scout, Boo Radley, and Tom Robinson's beloved story was finished before Lee's original (and only) novel, but it took more than 50 years for Lee to decide to publish it. According to the statement by HarperCollins, Lee came across her manuscript in "a secure location." Let's let her tell you the rest:

In the mid-1950s, I completed a novel called Go Set a Watchman. It features the character known as Scout as an adult woman, and I thought it a pretty decent effort. My editor, who was taken by the flashbacks to Scout's childhood, persuaded me to write a novel from the point of view of the young Scout.I was a first-time writer, so I did as I was told. I hadn't realized it (the original book) had survived, so was surprised and delighted when my dear friend and lawyer Tonja Carter discovered it. After much thought and hesitation, I shared it with a handful of people I trust and was pleased to hear that they considered it worthy of publication. I am humbled and amazed that this will now be published after all these years.

I too am amazed, but cautious. Gosh, the original novel is just the best, and I'm totally afraid of adding more to it if it's not necessary. Also, Lee is 88 and she has shied away from the media and any attention at all for decades, never publishing any other novel, never mind a sequel. That statement above is probably the most she has said in ages. So the publication is far more of a big deal than if she had published it back in the 1960s.

Many have speculated about the involvement of Lee's family in her recent affairs — suing Lee's agent over copyright money and suing a beloved hometown museum for "capitalizing on the fame of To Kill a Mockingbird" — so huge fans just want to ensure that it's Lee that desires this, and she's not being used.

I want to be excited! I am excited! Anyone who says they don't want to read more about Scout is just lying, but talk about massive expectations. But if Harper Lee is 100 percent on board to step up to the challenge publishing a sequel to one of the greatest books ever, then she is just the brave, awesome woman we all knew she was.