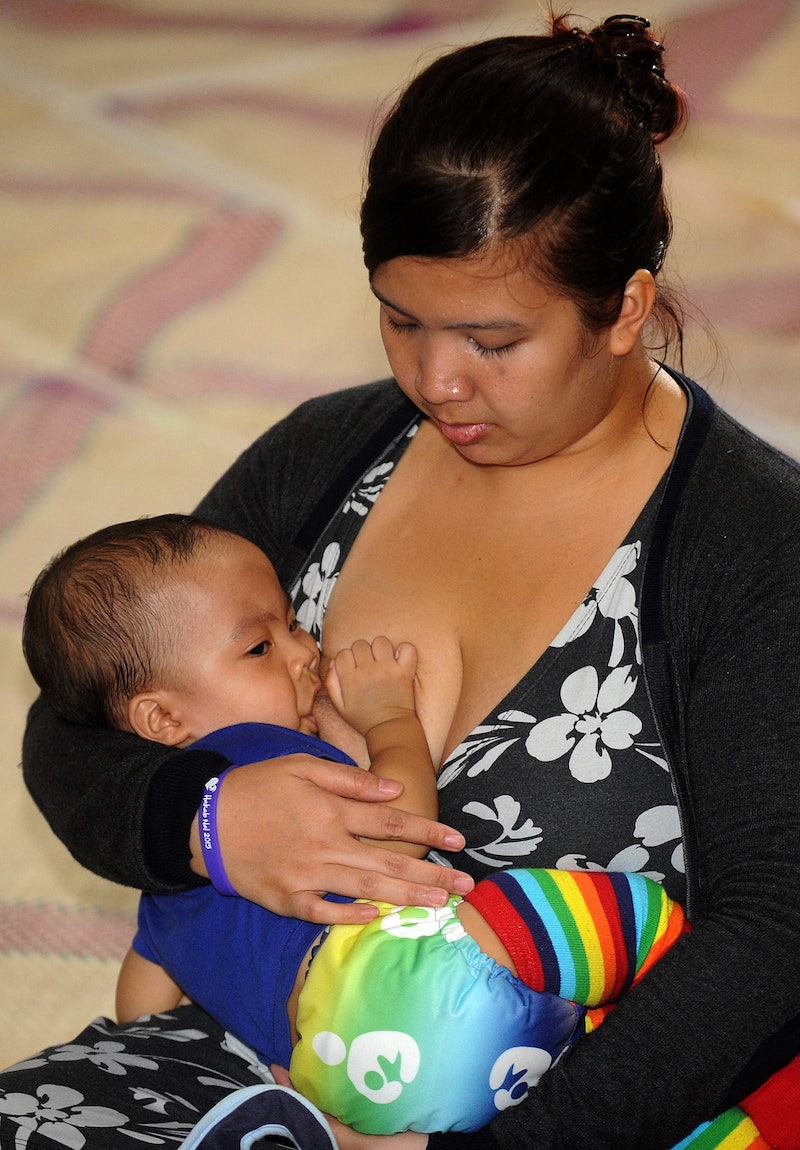 For years, we've seen study after study that shows the benefits of breastfeeding for infants, but it turns out it might benefit mothers, too. Two new studies show that breastfeeding reduces risk of diabetes and breast cancer for women, which is a pretty big deal. In some ways, though, it makes a lot of sense; after all, breastfeeding is what female bodies are naturally geared to do after giving birth, so it isn't all that surprising that doing so would help keep your body healthy.

The two studies were each conducted separately, and each focused on a different illness, but both showed health benefits for parents who breastfeed. The first, which was published in the Annals of Oncology, looked at 27 different studies on breast cancer what the rates of certain types of breast cancer might be for women who breastfed versus women who did not. They found that women who had breast fed a child were 20 percent less likely to develop a type of breast cancer known as "triple negative breast cancer" though researchers say they are still unsure why.

In the second study, published in the Annals of Internal Medicine, researchers looked at over 1,000 women who had gestational diabetes during pregnancy. Because women with gestational diabetes have an increased chance of developing Type-II diabetes after giving birth, the researchers looked at whether breastfeeding reduces that risk. And they found that women with gestational diabetes who breastfed their babies were on average 50 percent less likely to develop Type-II diabetes than women who did not breastfeed. Moreover, the longer a woman breastfed, the less likely she was to develop breast cancer.

So basically, breastfeeding is not only good for children — it also keeps mothers healthy, too.

And there are other benefits for moms who breast feed, too. "The normal physiology is breastfeeding after pregnancy," Alison Stuebe, an assistant professor in the Division of Maternal Fetal Medicine at the University of North Carolina in Chapel Hill, told Scientific American. When women cannot or choose not to breastfeed, she explained, "there are myriad consequences, and we're just figuring them out."

Here are just a few that we know of so far.

Breastfeeding causes your body to release oxytocin, a chemical that, among other things, causes the uterus to contract, helping it return to its pre-pregnancy state and reducing the risk of uterine hemorrhage.

Contrary to popular belief, not all fat is inherently evil and going to wreck your health. However, during pregnancy your body stocks up on "visceral fat" which can build up around your organs and cause major health problems. However, breastfeeding burns through those fat stores — which is probably why your body put them there to begin with.

Researchers still aren't sure why, but studies suggest that women who breastfeed have a lower risk of cardiovascular disease and related problems, such as stroke.

Decreased Risk Of Other Cancers, Too

It's not just your risk of breast cancer that goes down when you breastfeed. Research suggests your chances of uterine and ovarian cancer decline, too.

So there you have it. Breastfeeding is not only good for babies, it's good for mothers, too! Which is all just one more reason why it would be great if our society could stop stigmatizing it and see breastfeeding as the totally healthy and natural thing it is.