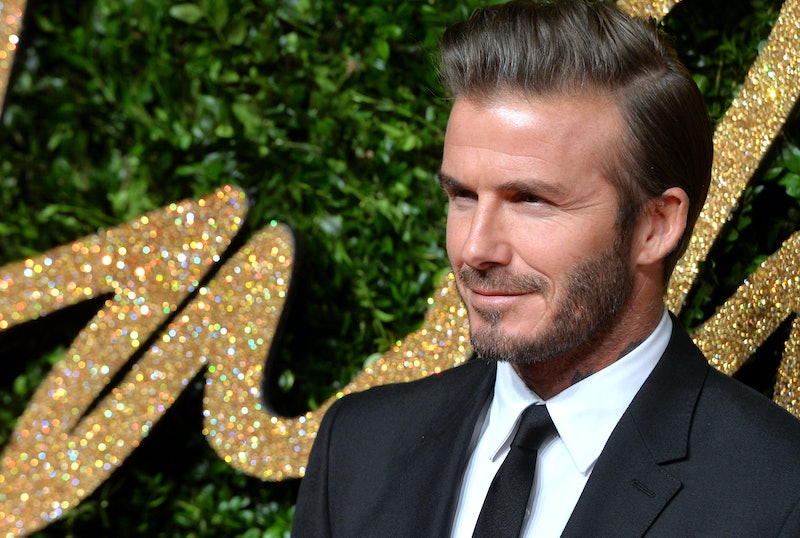 There is much to love about David Beckham. His hair is so shiny and suave that it is like a whimsical woodland creature styles his hair every morning. His body is truly a piece of artwork, both because of his ever-growing collection of tattoos and because he is built like a G.I. Joe action figure circa 1984. He is a super devoted husband to Posh Spice, and, together, they are raising a mini-race of beautiful children who will put any of my future offspring to shame. But the most important reason to love David Beckham is because he is really good at bending things. Don't believe me? There is a video on the Internet of David Beckham bending things, because the world is a wonderful place.

David Beckham is the world's Sexiest Man Alive. This designation was formally announced by People Magazine in mid-November, but has been unofficially recognized previously by any human who ever has seen his steamy H&M ads. Since the announcement, David Beckham has been doing tons of interviews to inform the world about his sexiest (which, duh, we all already knew), and then something magical happened. Someone was like, "Hey, the phrase, 'Bend It Like Beckham' is a thing, let's make Mr. Beckham bend things" — and then my favorite clip on the Internet was born.

And, like any good sport commentator, I shall dissect this video play-by-play.

A Classy Intro For A Classy Man

I really like how this intro to the video captured the essence of David Beckham. It is classy and classic just like the Becks. Have you seen David Beckham in a suit? It's how all men should look while wearing suits. This intro is also extremely thought provoking. It caused me to think, "Woah, what can't he bend? That's like a really good question. I've always wondered what David Beckham can bend and now my prayers have been answered." It's like Christmas has come early.

Then the punniest of sexy videos begins. First, the items start off small, like a silver spoon. But a silver spoon is no match for the brute might that is David Beckham.

Next, the Beckham destroys a cucumber, which he and myself alike were surprised to see it snap quite like that.

Then, Beckham bends this plastic bat like it is made of flimsy plastic. Which I'm sure it was not; David Beckham is just that strong.

Now, on to the tough stuff. When they first hand David Beckham a golf club, he seems doubtful of his own strength.

But look at him bend this golf club like a champ.

Sadly, then the mighty David Beckham is defeated by steel pipe, and my view of him is only slightly tarnished.

And then it's like David Beckham wasn't even trying with this wooden pole. Which makes me very sad.

So, it turns out that Beckham cannot bend steel or wood. This is duly noted, and I will be updating his Wikipedia page to reflect this.

Check out the full bendy video for yourself below.

Keep bending our hearts with your sexiness, David Beckham. The world thanks you.