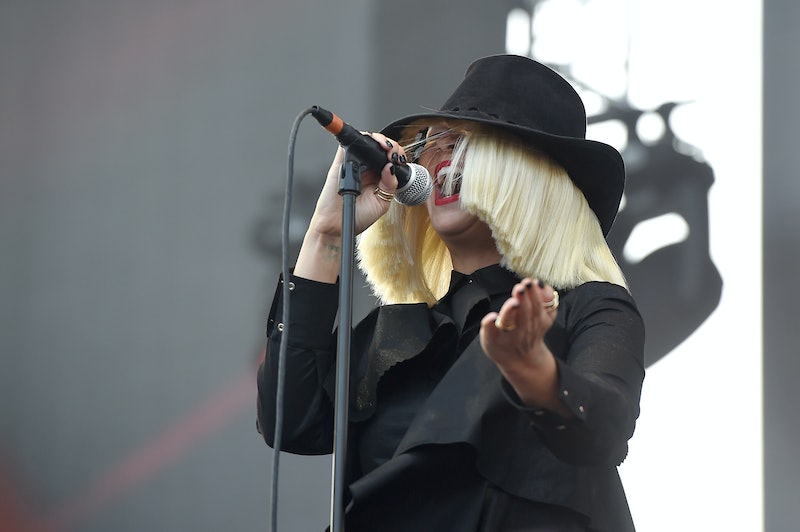 It's always an exciting day when new music from a great artist comes out. That's why I'm pumped that Sia released "One Million Bullets," the third track from her upcoming album, This Is Acting. I pride myself on my ability to analyze song lyrics and mine them for deeper meaning, even if there isn't necessarily any (i.e., Rihanna's "Cockiness"). But, when it comes to discography of Sia, there's always a plethora of layers to peel back. So, I was excited to try to figure out what exactly "One Million Bullets" is about.

From the first listen, I felt that the song was written about being in a relationship in which you have more invested than the other person. However, after a deep-dive analysis of the lyrics, I'm not so sure. Given the singer's private ways, it is unlikely that she'll be revealing who or what the song's about anytime soon, but that's not going to stop me from speculating. Here are a few theories I have:

Since she's always remained fiercely protective of her personal life, Sia managed to pull off a feat few other pop stars of her caliber ever could: In August of last year, she married director Erik Anders and managed to not talk about it for eight months. Even then, it was only to say "thanks" when DJs from Australian radio station Nova 96.9 congratulated her during an interview.

When asked whether she'd written a song about their first kiss, she told the station, "It's not really my jam although I did write one right before we got together I like to say is about us. I'm trying to pitch that to Maroon 5 or Bruno Mars. It's called 'Step By Step.'"

Maybe she wrote "One Million Bullets" about their relationship, too!

The "Chandelier" singer has gone on record saying that her relationship with Samson shifted the focus of her songwriting from ballads to pop. In a 2010 interview with SPIN, she admitted, "I’m sick of going, ‘Yeah! Women! I started dating JD Samson from Le Tigre and suddenly I was listening to more up-tempo music and old dance music, like ESG and Gang of Four, and I thought, ‘Wow. This is fun.’ It was time for me to make a really shallow pop album.”

Now, given the love ballad nature of "One Million Bullets," it seems unlikely that it's about this relationship. But, you never know! Maybe she picked the style to pay homage to the fact that he helped her open up a bit more and accept new genres.

Perhaps the song is more metaphorical than literal. Sia has famously been uncomfortable with the spotlight, donning a rotation of wigs, masks, and using other distractions to prevent her audience from seeing her face while she performs. “It’s horrible,” she told New York Times Magazine of her early struggles with fame. “I just wanted to have a private life. Once, as my friend was telling me they had cancer, someone came up and asked, in the middle of the conversation, if they could take a photograph with me. You get me? That’s enough, right?"

It's possible the song is about her struggle of giving herself over to the public in order to do what she loves to do, and her love/hate relationship with her career.

Among the greatest advantages to being as sensitive as Sia is being able to channel your thoughts into the voices of other artists. In an interview with Ryan Seacrest, Sia revealed, “Most of the songs, if not all of them, I wrote for other people and they were rejected," adding that the song "will tell [her]" who it should go to. "Generally, they’re songs that aren’t from my perspective, so it feels like acting. I have rejects from Rihanna, Shakira, Beyoncé, Demi Lovato, all the good girls, Katy [Perry].”

Maybe "One Million Bullets" is about the pain of rejection from these other artists, and her struggle with still wanting to write for them.

Perhaps the song is a collection of great lines gleaned from a variety of sources. After all, Sia revealed in that Ryan Seacrest interview that a lyric from "Alive" was inspired by “America’s Next Top Model.”

She explains: “This beautiful young man on the last cycle had said that he had had a tough life, but he said, ’I am still breathing,’ and I felt emotional, and so I wrote it down. I have so much to thank reality TV for." Perhaps "One Million Bullets" is another one of those things she's thankful for. But, whatever the song is about, I'm sure thankful she released it for us to enjoy!