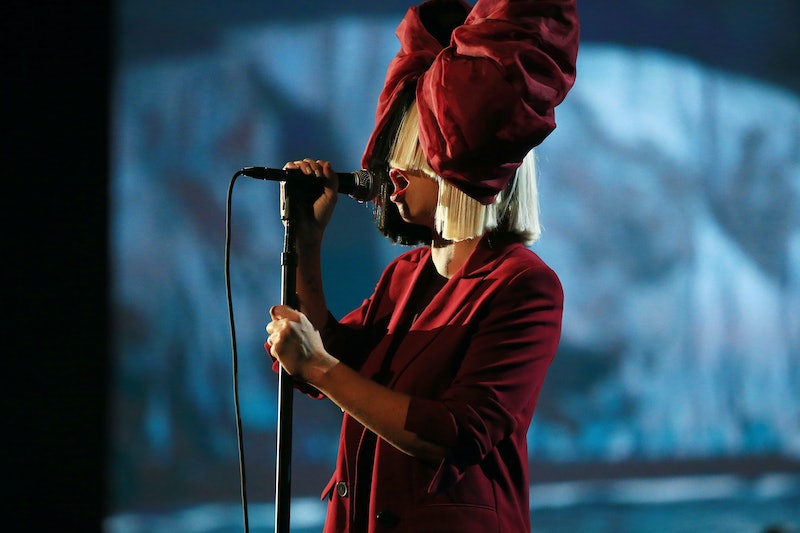 On Friday, we were all granted an early holiday gift when Sia dropped "One Million Bullets," the third song from her upcoming album This is Acting. The Australian singer-songwriter premiered the track on the heels of "Alive" and "Bird Set Free," which came out in September and November. Although This is Acting is solely composed of songs Sia wrote for other artists (as she told NME in February), the "One Million Bullets" lyrics prove this is a love ballad that only Sia could sing.

During the first verse, "One Million Bullets" starts slow, as Sia's voice remains hushed and subdued, singing "Under the moonlight/Weathering with your warm embrace" and a chorus in the background hums "Oh-oh-oh-oh-h." It becomes clear right away that this isn't your average love ballad narrative, because in typical Sia fashion, she subverts what's expected, and begins to explain how it's all wrong. "Yeah I picked the wrong kind/ Time after time/ I drank from the poisoned wine/Yeah I picked the wrong kind." Then she doubles back again, singing, "I feel so safe here/Baby we're worth the wait" and "But baby you're alright/Yeah baby I seen the light." As it continues to ominously build, "I got a feeling, I got a feeling/ Danger is coming, a danger is coming/I got a feeling, I got a feeling/ The war has been won here, the war has been won here," we become increasingly aware that these complex and emotional feelings could only be carried by an artist like Sia.

It's after the vocal apex of the chorus that Sia asks, "How many would you take? Cause I'd take one million bullets babe," and where we realize that the song is true to form, pure, anthemic Sia. She repeats over and over again, "How many would you take?" and each time, the emotions become rawer, more authentic, and more prying. Regardless of whom the tune was originally penned for, this a love ballad that only Sia — the enigma of a pop star — could sing, because it's a love ballad that feels both shy and bold. Both self-sacrificing ("I'd take one million bullets babe"), and confrontational ("How many would you take?") just like the dichotomy that she presents in her own life.

A musical artist with immense talent that's uncomfortable in the spotlight, suffering and flourishing because of her own fame. No offense to Rihanna, or Adele, or to other artists who could have done a beautiful rendition of this, but "One Million Bullets" was made for an artist like Sia. It's a ballad that only Sia — full of guarded intimacy — could have done with justice.