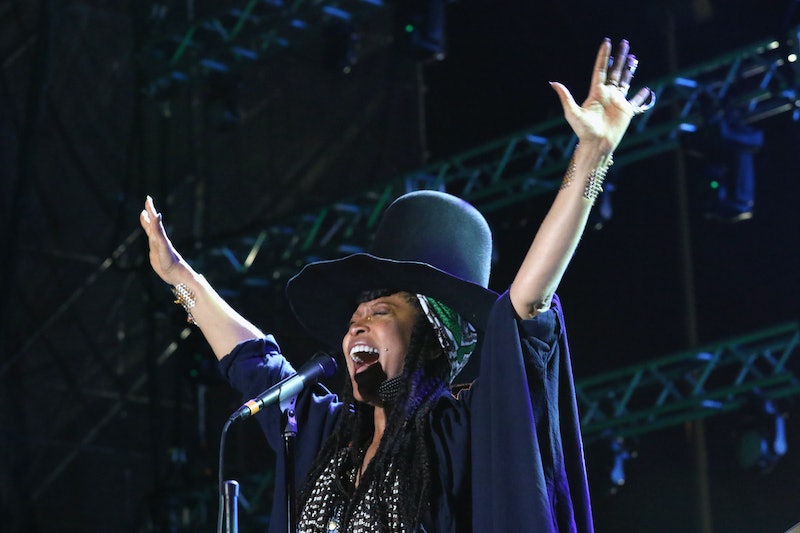 In a new release built around her "Hotline Bling" remix, Erykah Badu's new mixtape But You Caint Use My Phone has Drake written all over it. The mixtape is all about phones, texting, and phone calls, and many of the songs feature callbacks to Drizzy's most recent hit. Obviously, the mixtape includes Badu's remix of "Hotline Bling" that she released a month ago, and which — fun fact — contains Badu's real voicemail message. It then builds on this with lots of phone-related covers and an appearance from Badu's ex Andre 3000 on the final track.

Many who listen to it will wonder what Drake's involvement in the album was, or whether he's a featured artist, which is not a crazy speculation to make. There is someone who sounds a lot like Drake in the songs "You Use To Call Me" and "What's Yo Phone Number/Telephone," and Drake is no stranger to Badu and her family (and not afraid to namedrop her in his songs). Talking to Gerrick D. Kennedy of the LA Times, however, Badu revealed that the Drake-sounding person in the mixtape is not in fact Drake. When asked if it was Drake on BYCUMP, Badu revealed the hilarious truth:

It’s not Drake. It’s one of my artists named ItsRoutine. He’s on my label and he can do anything. He sounds like him sometimes. His name is Aubrey as well.

So it looks like there's another Aubrey out there who might give Aubrey Graham a run for his money. His name is Aubrey Davis, and you can find him on Soundcloud. From the looks of it, Drake didn't have anything to do this mixtape, but I imagine that he would be a fan. At the beginning of the month, Badu told The Fader that she didn't even know if Drake had heard her remix, but she says that they're good friends. In spite of this, a lot of people seem to think it's Drake rapping, and Badu had to take to Twitter to clear up the rumors.

Other people seem to assume that the guy rapping is Seven, Badu's son with Andre 3000, and Badu has been retweeting those rumors, presumably for her own amusement. The mixtape is interesting enough without wild speculation or Drake's involvement. It's experimental but really fun to listen to, and Badu told the LA Times that she sent it to iTunes herself with no label involvement at all. Here's what she told The Fader about the concept:

I'm in love with this mixtape, it feels good. I think it's a whole new frequency for the planet and I just wanted to do it because it's inspiring me to write my new album—it's kind of like the buffer in between.

If you're ready for the future, but not actually Future (or Drake), you can buy Badu's new mixtape on iTunes.