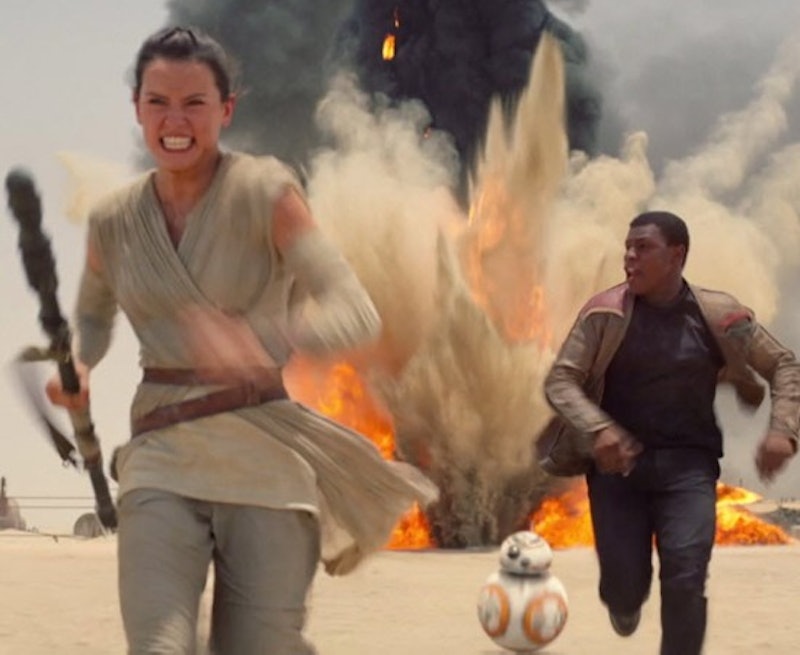 The Star Wars franchise has always been first and foremost a family series, able to be seen by children. While the films often depict dark subject matter like the violence of war and good versus evil, the inclusion of Ewoks and the dreaded Jar Jar Binks prove that some aspects of Star Wars are meant to appeal directly to kids. That is why it might come as a surprise to some that the Star Wars: Force Awakens rating is a PG-13, not the more family-friendly G or PG.

According to FilmRatings.com, the Motion Picture Association of America classified Star Wars: The Force Awakens as PG-13 because of its "sci-fi action violence." This means that while the violence depicted on screen is likely not overly graphic, it does probably have elements of scary science fiction — like a man in a giant black cape fighting another man in robes (i.e. pajamas) with lightsabers. Still, it's not considered realistic violence (sorry, LARPers), and thus doesn't get that label.

It's a big change from the previous films in the franchise. Five of the first six Star Wars films garnered PG ratings, although it's worth noting that the original films were released before the creation of the PG-13 rating (which occurred in 1984). It is safe to assume that The Empire Strikes Back would have earned a PG-13, simply because of scene where (spoiler alert) Darth Vader cuts off his own son's hand. The original trilogy as a whole included many dark, somewhat adult elements like the death of Obi-Wan and Luke's family, and whatever the nightmare inducing thing Jabba the Hutt is.

In contrast, the first two films of the sequel trilogy (Episodes I-II) were decidedly more family friendly with an emphasis placed on pod-racing and young boys with bad haircuts. The sixth film, Star Wars Episode III: The Revenge of the Sith, received a PG-13 rating for sci-fi violence and intense images. This rating totally makes sense. This film is all about Anakin going over to the dark side and becoming Darth Vader. Also, he literally murdered a school house full of young Jedi (bad, Anakin). This film was begging for a higher rating.

The Force Awakens' PG-13 rating, in addition to several other factors (including the film's running time and other stylistic choices) indicates that this new Walt Disney-sponsored and J.J. Abrams-helmed film is shifting away from the child-centric nature of the sequels and more closely aligns itself with original films. This is great news for Star Wars fans, and it doesn't mean that kids won't be able to see the new movie. The Force Awakens will still be a family film, full of hope and stories of redemption, but a PG-13 rating proves, thank goodness, that it will not be catering just to the under 12 set. A darker film with the grit and heart of the original films is exactly what Star Wars fans have been waiting for. So bring it on, J.J. Abrams.