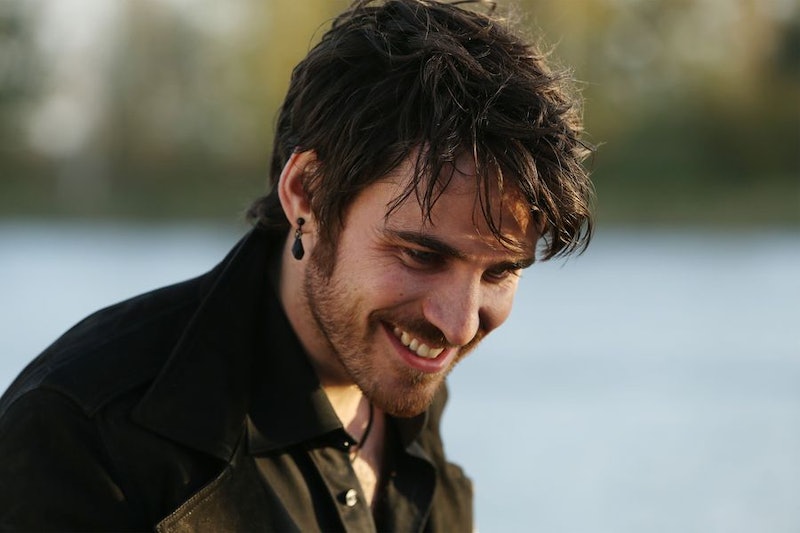 I was really worried about coming up with a catchy term for Hook, now that he's also a Dark One. Thankfully, Regina took care of that for me, and has henceforth christened him: Captain Dark One. Nice. Does he live up to the name? He sure does. Turns out that Hook is responsible for just about everything that's gone wrong in Storybrooke and Camelot over the season, and slowly, his plan starts to make sense. Still bent on getting revenge on Rumple, Hook kills Merlin. But does he get his revenge? With next week's Winter Finale, everything that's been laid out over the past season begins to make a lot of sense — finally. Remember when Merlin visited Emma as a child and told her not to pull Excalibur out of the stone? No, I can't figure out the time travel aspect of this, but it was actually Hook who put the sword into that stone. With Emma pulling it out, it's actually Hook who suddenly becomes the most powerful in the land, since he's tethered to it. Too bad Emma didn't listen, but then again Emma is Emma and is probably never going to listen. There's also the fact that Hook crushes Merlin's heart. He does so just after Merlin is done recording his "away message" in the cauldron. Hook's the Dark One he's referring to! Didn't see that dark twist coming. But a Dark One's gotta do what a Dark One's gotta do.

Plus, remember that strange boat out on the water from the first episode of this season? What was that about? Maybe you've completely forgotten about that boat, but it comes back tonight. That boat is full of Dark Ones! From The Underworld! That sounds like a fun cruise to take next summer. Hook is able to summon it back with his newfound powers, and they're all here to help him get what he wants.

And what's that? Revenge on Rumple. Let's not forget, Hook is still constantly driven by his hatred and feud with Rumple. He might put on a friendly face in Storybrooke, but they still really, really hate one another. At the beginning of the episode Hook challenges him to a duel out on the water, as you do. It looked like Hook was going to completely finish him off, and then it looked like Rumple had the upper hand, and in the end, neither one of them won. Good thing Hook's now got a boat full of his Dark One buddies to help him finish Rumple off one and for all. Only one of them will be able to survive the OUAT Winter Finale, and right now, I'm not sure who it's going to be. Image: Jack Rowand/ABC