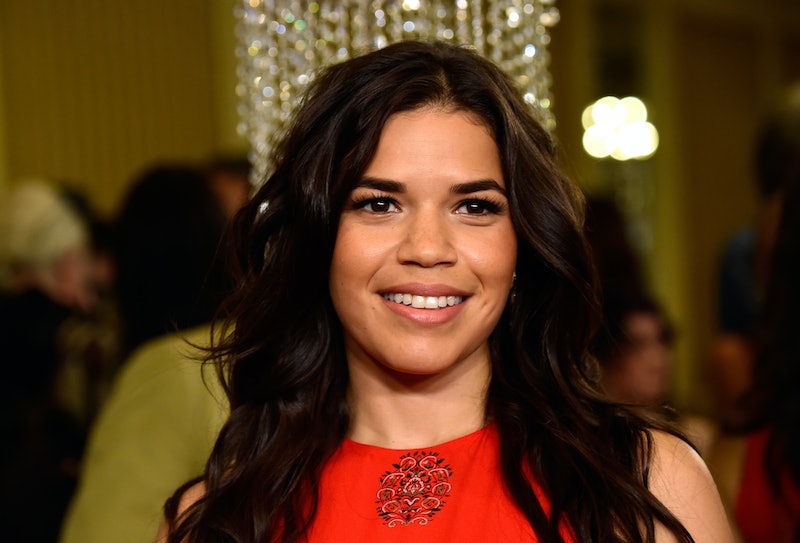 Stop the presses because Ugly Betty scene stealer America Ferrera is officially returning to primetime TV in Superstore, a promising new sitcom from NBC. Helmed by showrunner Justin Spitzer (you might recognize him from his work from previous successful workplace comedies The Office and Scrubs), Superstore is already garnering positive reviews leading up to its winter premiere. And, really, what's not to like? It boasts an ensemble cast helmed by Ferrera and Mad Men fan favorite Ben Feldman — and, if the trailers are any indication, we can expect them to fall in love by the end of the season.

Suffice it to say, Ferrera's upcoming starring role in Superstore is great for a whole host of reasons — chief of which is the fact that it's her first major return to the small screen after winning all of our hearts (and all of the awards) in Ugly Betty, which went off of the air over five years ago. So, what's the former Ms. Suarez been up to for the past five-plus years? Turns out she's been quite busy; she's done everything from getting married to telling off Donald Trump — so let's take a look at some of her highlights!

She Starred In Chicago On The West End

It's tough to imagine the same woman who played the ultra-earnest Betty Suarez taking on the lasciviously duplicitous Roxie Hart, but the award-winning Ferrera's definitely has the chops it takes.

After 10 years (hey, she was pretty busy headlining TV shows), she graduated from USC, with a degree in International Relations with the class of 2013. Scarily enough, it turns out she almost quit acting in order to finish her education — but luckily, she found a way to do both.

Speaking of milestones, Ferrera got hitched to longtime beau, Ryan Piers Williams back in 2011. People magazine reports that they met as classmates at USC (he directed her in a student film!), and they continue to collaborate to this day — in 2014, they co-produced/co-starred in X/Y , which was written and directed by Williams.

She Told Off Donald Trump

Ferrera has always been politically active, and she made headlines in a major way when she penned an open letter to Trump, essentially thanking him for sending more Latinos to the polls.

She Almost Headlined a Romeo and Juliet-inspired Telenovela

Slated to be produced by Ben Silverman (of Ugly Betty and Jane the Virgin fame), Pedro and Maria was to be a limited series based off of a telenovela based off of Romeo and Juliet. Tragically for all parties involved, it didn't end up getting picked up — seriously, how cool would that have been, though?

She Starred in How To Train Your Dragon

Though she's been largely absent from the small screen, Ferrera played badass Viking Astrid in both How To Train Your Dragon movies.

And last, but certainly not least? Even with all the stuff she's got going on...

... She Still Makes Time to Hang with Her Ugly Betty Crew

Doesn't this snap from Ferrera's 31st birthday party just warm your heart? I can't wait to see her back on TV with Superstore.