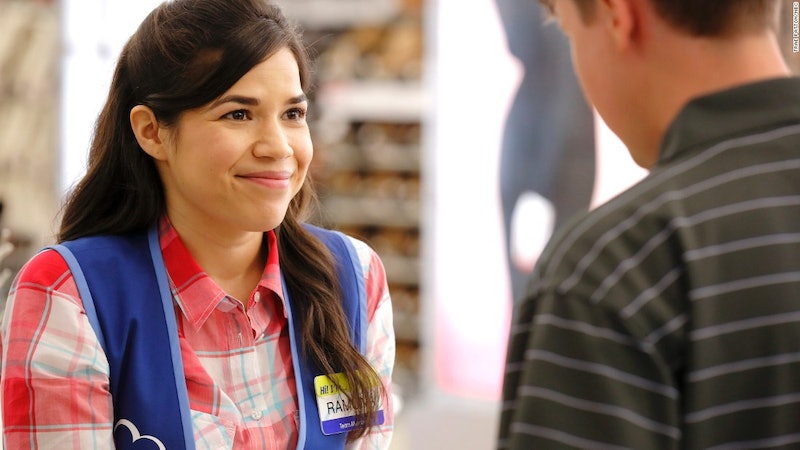 On the long list of TV shows my life would not be complete without, Ugly Betty is in the top five thanks almost entirely to America Ferrera. As Betty, Ferrera was inspiring, funny, and a true star. Then, she disappeared from TV for a long time and it was a super distressing period of my life. However, these dark times are nearly over, because she is going to be back on TV very soon thanks to NBC's Superstore. Entertainment Weekly unveiled the first Superstore trailer featuring America Ferrera, and the two-minute sneak peek of the big store comedy is going to remind you why you miss her in a big way.

Superstore focuses on the ragtag group of employees at Cloud 9, a fictional big box store. Mad Men's Ben Feldman is Noah, the new guy who accidentally marks all the items in the store down to a ridiculously low price, and Ferrera is Amy, the sarcastic, longtime employee who tries to keep her wacky co-workers in check. They are almost certainly going to fall in love at some point, but it is hard to focus on potential romance when Ferrera is bringing all of her talent and charm back to TV along with a touch of sadness I've never seen from her before, but am really excited about watching her explore.

Ferrera's greatest gift is her ability to feel so natural, and the trailer makes it clear Superstore is going for broad humor. (When an employee is carrying around a bag of crystal meth and firing off shotguns in the store, you know the show isn't exactly going for realism.) That's what makes Ferrera's presence all the more welcome: She has always been hilarious. Back in her Ugly Betty days, she could do slapstick in her sleep, but no matter how heightened the situation was, she always kept the series grounded. She is a magician who can make you laugh hysterically at a pratfall or a well-timed joke and also make you cry with all the pathos she brings to her roles.

There's not a lot of Amy in the trailer, but her scenes reveal her to be the store's anchor. There is a moment where Ferrera challenges the manager when he asks her to hand out salsa and she pointedly asks if he chose her because she is Latina that could have fallen flat — but it works because Ferrera delivers the line with a mix of frustration and deadpan humor that totally sells it. Add in the sweet chemistry between Ferrera and Feldman along with the sense that Amy is not completely satisfied with her Cloud 9 job, and your anticipation level for Superstore will probably hit seventy billion just for Ferrera reasons.

No, Ferrera isn't playing Betty here — Amy is cynical and firmly living in the adult world, but that makes Ferrera's return all the more exciting. You're older now too, and Amy is probably exactly the kind of character you need in your life right now. As for TV, all I know for sure is it is better when Ferrera is on it. Superstore is bringing one of TV's most talented people back to the medium, and that is reason enough to be psyched.

NBC will premiere two episodes of Superstore after The Voice on November 30 before the show's official premiere on January 4.