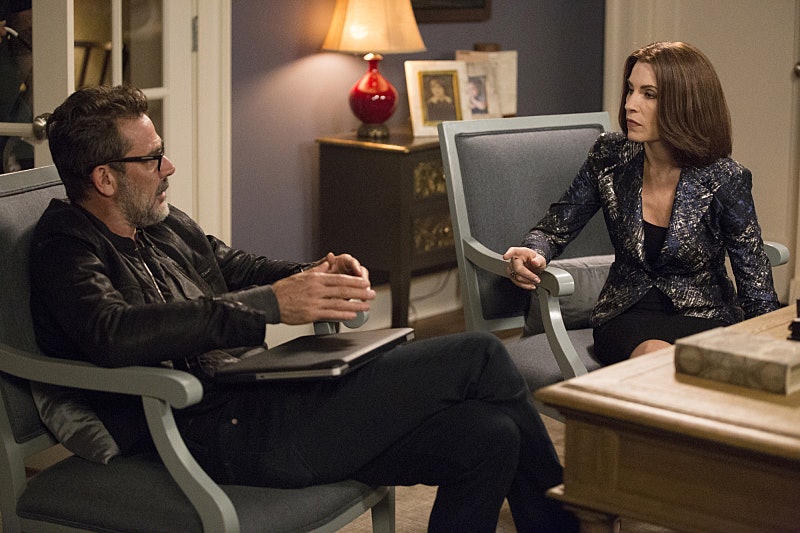 After weeks of will they/won't they chemistry, it seemed like Alicia was finally going to make a move on her new investigator, Jason Crouse, on The Good Wife this week. Alas, it wasn't meant to be. After Ruth saw Alicia and Jason touching in her apartment — Alicia was just touching Jason's arm, but where there's smoke in political campaigns, there's usually fire — Eli made it his mission to stop them from taking their relationship to the next level. But, before Alicia and Jason even had a chance to do more than exchange heated glances, Ruth and Eli found out that Jason had been investigating Alicia in "Discovery." But, why was Jason investigating Alicia?

When Eli confronted Jason about his investigation into Alicia, Jason insisted that he did it after they first met. He likened it to a background check, just so he would know who he was going into business with. Eli definitely wasn't buying it, and frankly, I'm not convinced either. Eli never mentioned whether or not the file on Jason revealed any other covert investigations on his part, like if he also checked into Lucca Quinn's background when he began working with her. Eli also failed to note whether or not Jason's investigation was still ongoing — which would be an even bigger betrayal.

When Eli told Alicia that Jason had investigated her, his exact words were: "He has a personal file on you. He has looked into your past." I'm guessing Alicia's first thought will be that Lockhart, Agos & Lee hired Jason to get dirt on her, just because Jason confirmed to her that he was also working for her old firm while freelancing with her. However, the idea that Diane and Cary would have hired him to look into Alicia seems plausible at best, ludicrous at worst. After all, they already know everything there is to know about her. It's likely that Jason's investigation had to do with Peter's campaign. Maybe Jason was hired by one of Peter's opponents? Or perhaps he was working with Frank Landau of the DNC? Or maybe he's just a guy looking for love who investigates all possible companions?

Whatever Jason's motives were for his investigation, I hope we discover them soon, so that these two can finally act on all that sexual tension.