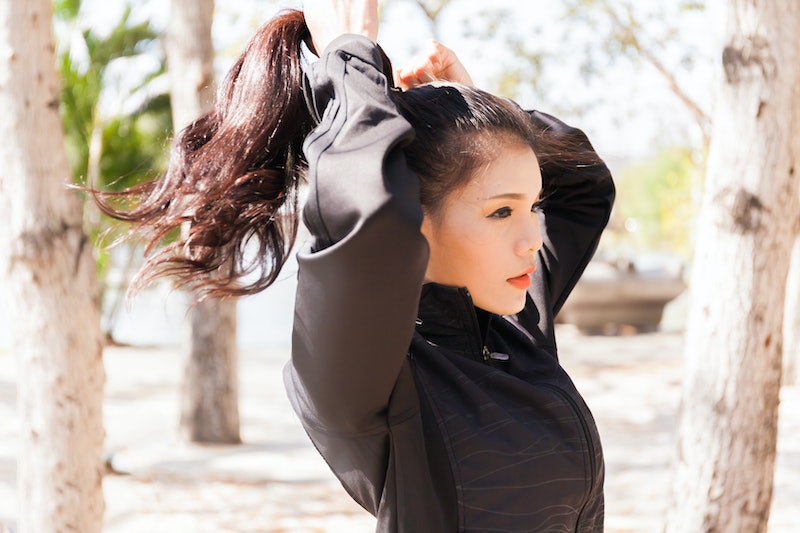 A lot of us walk out the door each morning so used to strapping a hair tie on our wrists that we wouldn't give it a second thought. It might seem like the least dangerous part of your morning routine, but that wasn't the case for Audree Kopp, who allegedly sustained an infection from wearing a hair tie on her wrist. (WARNING: This post contains graphic images.) The Louisville, Kentucky resident said that she noticed a small bump on her wrist growing larger, and sought out medical treatment for it. After being given antibiotics, the bump continued to swell — the next morning she was rushed into emergency surgery, after the discovery that the bump was infected with three types of bacteria, and close to causing blood poisoning.

Doctors warned her that the bump was caused by a two-day-old, glittery hair tie that Kopp had worn around her wrist, that caused a tiny scratch and allowed the bacteria under her skin. Dr. Amit Gupta, a member of the medical team who worked on Kopp's case, warned on WLKY, “Be careful — you can’t put all these hair ties around wrists, they can cause problems with the skin, with infections."

Here is an image of the initial bump, which Kopp believed at first to be a spider bite:

Doctors had to treat the infection by going under the skin, and Kopp shared with BuzzFeed news that surgeons told her it was lucky it didn't end up in her bone or muscle.

Now Kopp has taken to social media to spread awareness about the unexpected danger, saying in a Facebook post, "Please share this, because I’m pretty sure about 90% of us females don’t think twice about keeping hair ties on our wrists." She also advises hair tie enthusiasts to use the plastic, no-slip variety, because they are much less likely to cause tiny scrapes on your wrist.

For those of us still using the normal variety, she says to make sure you wash all the way up your wrist when you wash your hands, including under the hair tie — although she adds that she won't be wearing any more hair ties around her wrist after this.

More like this
6 Asian Beauty Rituals That Will Soothe Your Skin, Scalp & Mind
By Jennifer Li
Wavy Hair Girlies Rejoice, Rhyme & Reason’s Wave Revival Regime Is Here
By Darshita Goyal
Grooming Mistakes You Don't Realize You're Making All The Time
By Allison Bolt
An Expert Weighs In On The Viral Raw Carrot Salad Trend
By Alexis Morillo
Get Even More From Bustle — Sign Up For The Newsletter
From hair trends to relationship advice, our daily newsletter has everything you need to sound like a person who’s on TikTok, even if you aren’t.