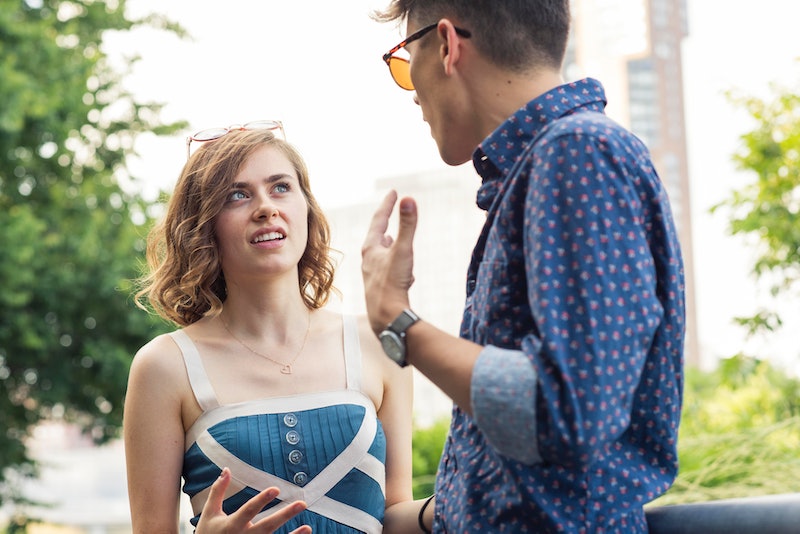 Are you guilty of staying in a bad relationship? Turns out, probably, but you're not alone. The majority of us would stay in relationships we shouldn't be in, according to a new survey. It took place on Yougov, looking at 2,031 British adults— and although I'd like to attribute some of it to British politeness, I don't imagine the U.S. would be very different. It turned out about 6 in 10 people have stayed in relationships they didn't find fulfilling, according to The Daily Mail.

The reason? They're used to compromising — even when their partner cheated, disrespected them, or lied. Unfortunately, it didn't come as a big surprise to me. I've watched a lot of people stay in relationships when unhappy or that aren't working for them, and I've done the same myself in my early relationships. Sometimes the relationships are just a little lack-luster, but sometimes they're downright awful. It's baffling how often people will be in a relationship just to avoid being alone.

Now, I tend to go too far the other way, I'm really happy being single and it's hard to draw me out of it, but for everyone it's difficult to find the balance. So if this sounds like you, it's nothing to feel badly about it— we all struggle with finding the right balance when it comes to compromise— but it's important to keep your eyes open, and remember that being alone is better than accepting bad behavior and being in relationship that isn't working. And more than that, you deserve to be in one that is working.

But it wasn't just a general feeling of lack of fulfillment — the survey revealed some other worrying relationship habits. Here's what else we learned:

1. Only 6 Percent Ditch Too Quick

Compared to the 60 percent who stayed in a relationship longer than they should have, only six percent said they were too quick to break up with someone. It's crazy that people are ten times more likely to put up with too much BS than they are to be trigger-happy with their breakups.

Twenty-three percent stayed in a relationship despite being lied to. I'm assuming that they mean big lies rather than like "No, it wasn't me that ate both those pints of ice cream in the fridge," because sometimes you need ice cream.

3. And Even More Had Stayed When Their Feelings Hadn't Been Considered

Thirty-seven percent said they had stayed even when their feelings were not being given proper consideration. I actually think this is the worst one. There are temporary things that may be circumstantial, but an ongoing lack of consideration for how you're feeling is not OK.

4. And 14 Percent Put Up With Cheating

And didn't break up with them. There are lots of reasons people cheat and not all of them are necessary relationship dealbreakers, but it's worrying as part of a larger trend of putting up with being undervalued.

5. Men Seemed More Likely To Put Up With Bad Behavior

According to the Daily Mail, "only 57 percent of men said that infidelity would cause them to break up with their partner in the future, compared to nearly three quarters (73 percent) of women." Similarly, more men would put up with being stolen from, which I found quite extreme, and were more OK with their partners prioritizing friends and family over them, which isn't bad behavior in itself, but can obviously be taken too far.