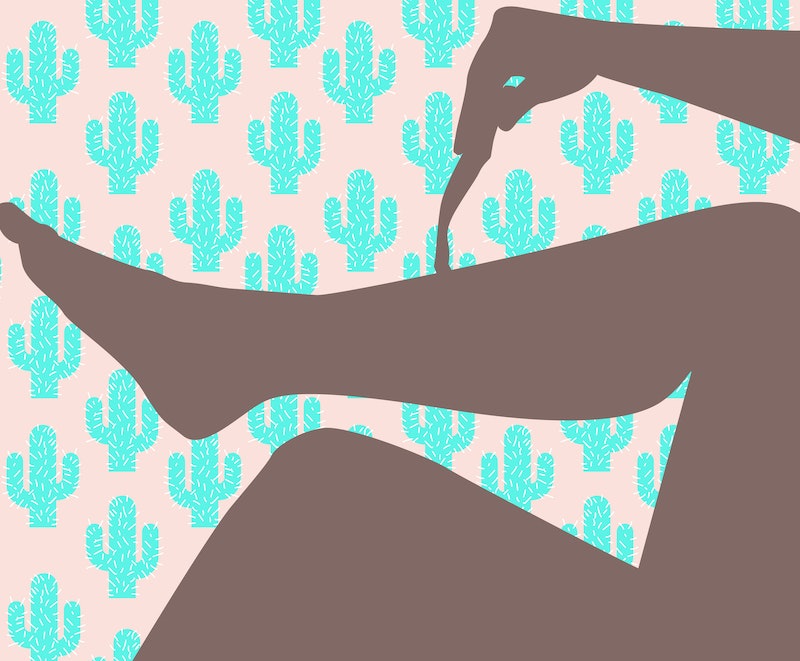 I'm practically an expert on responding to people who criticize women for not shaving their legs or any other body parts society expects them to shave. After writing what I thought was a very reasonable, non-accusatory article on why I don't shave my legs, many angry Internet trolls, three radio shows, and even several friends pressed me to defend my decision. My brief moment of fame wasn't the most relaxing period of my life, but it did allow me the chance to do something I'm very happy to do: Give ignorant people a piece of my mind while busting myths about gender and beauty.

My decision not to shave my legs wasn't even really an active decision. I started shaving around age 13 or 14 because that was just what my peers and the media taught me women did. But during college, when I reflected on the unfair beauty standards imposed on women, the whole ritual began to seem superfluous. I started going months at a time without shaving because I just had more important things to do. When my boyfriend told me he liked that I didn't shave because it meant I thought for myself, the last reason for me to potentially start shaving again went out the window. Nobody I've since dated, or anyone else close to me for that matter, has taken issue with it. But that hasn't stopped acquaintances and strangers on social media and dating sites from giving me a hard time about it.

Since I've dealt with a lot of comments about not shaving my legs, I've had to chance to come up with a few diplomatic but assertive responses. They'll probably also apply if you don't shave your armpits, bikini line, or anything else society expects you to shave (even though it really, really shouldn't). Here are same ways to respond to the most popular criticism and questions directed toward women who don't shave.

Quite a few people have told me I need to loosen up because people do things to look good all the time, including one mansplainer on Twitter who "taught" me about grooming rituals in the animal kingdom.

I've never said anything about anyone else in my article or any explanation of why I don't shave my legs, yet I've gotten multiple accusations of judging women who shave, including one email asking, "Are you proposing a law that women don't shave their legs?" Sigh.

Why would I judge someone for doing what I once did and still feel pressure to do? I also sometimes wear makeup, heels, and jewelry, partially because it can be fun, but also because I've been taught my value comes from my ability to be a sexual object and that the better sexual object I am, the more valuable I will be. When we attack women for trying to be what society considers beautiful, we lose sight of all the pressure to be beautiful that we're responding to. If someone feels obliged to shave her legs, the media and the people around her pressuring her to do so are at fault, not her. Someone may also choose to shave their legs for reasons unrelated to external pressure; some, for example, like the way it feels against their sheets. Whatever the reason, they don't deserve anyone's judgment.

I've been called "selfish" for not shaving, despite the fact that no partner has ever expressed offense at my legs.

If you are currently dating someone, chances are they don't mind your body hair. Chances are the people you've dated in the past haven't minded either, or else they wouldn't have dated you. Showing people that you can, in fact, not shave and still be desirable to someone may help other women feel OK with not shaving. I also like to say, "You mean the partner who is twice as hairy as me?" because my past partners have all had more body hair than me, so it would be hypocritical of them to complain about mine.

This is why defending women's choice not to shave is necessary: It's already an option for men. Some people may prefer men who are clean-shaven, but what men actually do with their facial hair is usually considered a style decision, not an obligation. I don't think shaving anywhere should be an obligation for anyone, so if you want to complain about men feeling pressure to shave, we're on the same page.

There's a common argument that men are biologically programmed to prefer shaved women because shaving exaggerates the sexual dimorphism already present in our species (i.e., the tendency for women to have less body hair).

Leg and armpit shaving were not common in the United States until the 20th century as a result of efforts to market razors to women. Nevertheless, women got married all the time before that era. As for the argument about sexual dimorphism, it's sexually dimorphic for women to be shorter, yet tall women are considered attractive.

I got asked this by some of the radio hosts I spoke to about my original article, and it's a milder version of the criticism I've gotten for not being feminine enough. A few people emailed me to let me know I'd might as well be a man. Oh, and I got that lovely tweet up there.

Say: "It's Nobody Else's Business How Feminine Or Masculine Anyone Is."

First of all, we need to examine what's considered feminine and masculine and why that is — it's no coincidence that being feminine often means paying an enormous amount of attention to your appearance — but a lot of people don't speak that language, so it's more effective just to remind them that gender expression is a personal choice. Oh, and — shocker! — you can be feminine and also not shave. You can also be masculine and shave, so really, it's a moot point either way.

One woman was genuinely curious why I would want my legs to feel prickly, and one man said he'd only want to date someone who shaves her legs, or else they'd feel prickly against his own skin.

People might assume leg hair feels prickly because they've only felt it when it was growing back after recently being shaved. After it grows out, though, your legs feel perfectly soft.

8. If Someone Says: "The Look Works For You Because You're Not Hairy..."

Friends and acquaintances have told me that since I'm naturally not very hairy, I can pull off unshaven legs, but hairier women never could.

Say: "Someone Could Have A Beard For All I Care."

By saying it's OK for women not to shave as long as they look like someone who shaves, we're perpetuating the idea that body hair on women is a bad thing. If you accept women as they are, you accept their leg hair, armpit hair, arm hair, facial hair, and any other hair they have, no matter how much of it there is.

I usually get this one from men. Even during radio shows when we were on air.

Say: "Then Why Doesn't Everyone Shave?"

Since most of the people disparaging my leg hair were men who likely don't shave themselves, their criticism is hypocritical. If there were something inherently disgusting about leg hair, we'd be disgusted by men who have it. Asking "Then why don't you shave?" or "Why doesn't everyone shave?" also conveys that nobody is forcing you to come into contact with my hair or anyone else's, so if body hair bothers you, you really only need to worry about removing your own.

This comment also usually comes from men. In this case, they're typically defending their right to only date women who shave without being called sexist.

Say: "I Have The Right Not To Date You."

Yes, we all have the right to our preferences, but that doesn't make our preferences less problematic. Someone can simultaneously behave according to their preferences and acknowledge that they have sexist roots. You don't have to date anyone with preferences that reflect sexist assumptions or would force you to give up something important to you. While it's true that our taste isn't entirely within our control, there does seem to be a correlation between how open-minded someone is and how willing they are to date a woman who doesn't shave. Your legs, armpits, or whatever it is could actually provide a method for weeding out sexist or closed-minded people, and that's yet another reasons to embrace your body hair.

More like this
Black Women's Equal Pay Day Highlights An Upsetting Problem
By Brandi Neal
15 Easy Pranks To Play This Halloween
By Emily Kelley and Lauren Grant
How To Politely Reject Someone Who Keeps Asking You Out
By Laken Howard and Lexi Inks
Help! I'm Not Getting Any Attention On Dating Apps. What Can I Do?
By Sophia Benoit
Get Even More From Bustle — Sign Up For The Newsletter