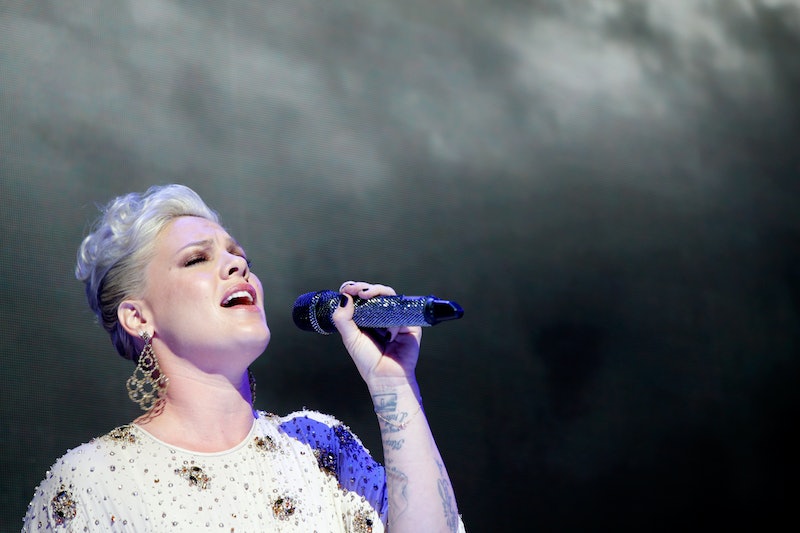 At first glance, the singer Pink and First Lady Michelle Obama don't seem to have much in common, but just wait until you hear about Pink's new appointment as a UNICEF Ambassador. You'll start mentally clearing out a room in the White House for her in no time. Because the platforms that she's working on in her new role sound super similar to the projects that the First Lady has been pushing ever since President Obama's first inauguration in 2008 — namely her "Let's Move" initiative, which targets childhood obesity by teaching kids and parents how to eat right and stay active. Now, hold that in your brain and see if anything sounds familiar once I start telling you what Pink's focus is in her new position.

She's working as the spokesperson for a charity organization called Kid Power, which focuses on "children's health initiatives," with special attention paid to active lifestyles, which they encourage with a tracking bracelet and accompanying app to make fitness fun. Here's what Pink had to say about her new role in an interview with People :

Statistically, one in four kids in the U.S. are inactive. And I'm all about fitness and health and positivity. One in four kids, globally, are malnourished. So UNICEF has found a way, with Kid Power, to combat both problems at the same time. You're getting kids super motivated to move their feet, and you're also creating, global citizens, where they care, and they're able to help other kids around the world.

How awesome is this? And am I crazy, or should Pink and the First Lady be pairing up right now for some kind of collaboration? In the past, Michelle Obama has paired with So You Think You Can Dance , so this would really be a natural fit if you think about it. I bet if we all cross our fingers real tight, these two will find a way to work together, and then they'll become best friends. This time next year, Pink will have taught Michelle Obama how to do aerial acrobatics, and she'll have a cameo during one of her concerts, and then and then and then ...all will truly be right in the world.