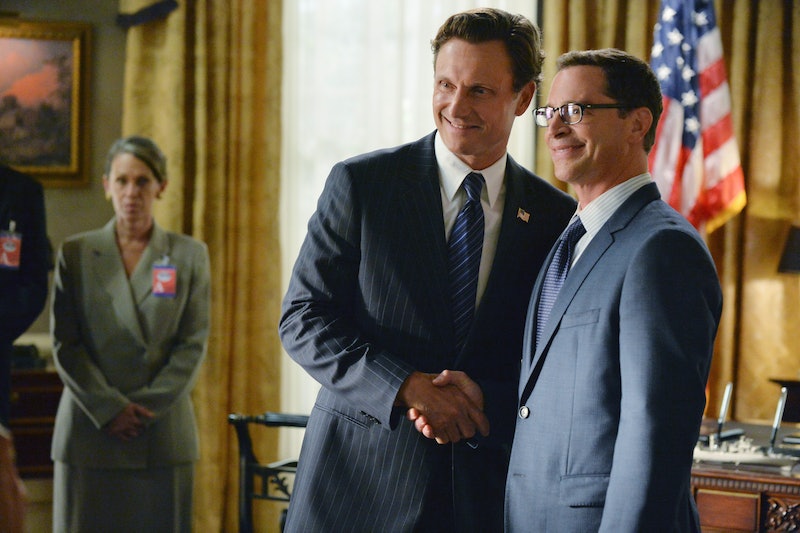 Get your tinfoil hat ready, because I have a conspiracy theory for you: did Shonda Rhimes get a Scandal character name from The West Wing ? We're pretty sure she did, and honestly pretty proud of ourselves for noticing, too. Please hold for a brief, congratulatory back pat. Bustle writer Emma Cueto was going about her day with an episode of The West Wing in the background — specifically Season 1, Episode 5, "The Crackpots And These Women" — when she caught a familiar name. Well, first she caught the fact that Nick Offerman, aka Ron Swanson from Parks and Recreation is in the episode, but that's a story for another time. Anyway, the real point here is that the character Toby Ziegler, played by Richard Schiff, is griping about how his job as White House Communications Director was offered to someone else before it was ultimately given to him, and that person's name is... David Rosen.

Sound familiar? Yup, that's the name of Joshua Malina's character in Scandal. And what seminal show was Joshua Malina on for four seasons in the mid-2000s? Why it's none other than The West Wing! It all comes full circle, and in the weirdest ways!.

But, whether Rhimes was scoping out The West Wing for potential actors to use in the future, trying to leave us this little Easter egg to find over a decade later, or just so blissed out on the drama of the show that she absorbed information without realizing it, this is one of those little bits of information that I cannot unsee, and it makes me want to find other parallels between the two shows. The truth is out there.