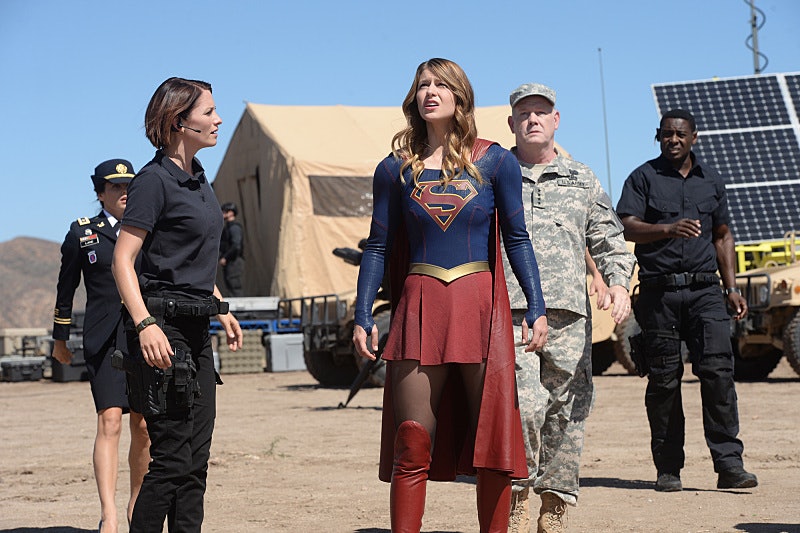 In addition to introducing many villains from the DC Comics, CBS's Supergirl has featured a number of recognizable names from the comic books like, of course, Kara Zor-El. Now (some of) the famous Lanes are also coming to National City on Supergirl. Sure, Lucy Lane, played by Jenna Dewan-Tatum, has been around for a few episodes, rekindling her relationship with James Olsen. But in "Red Faced" Supergirl introduces General Sam Lane, played by Glenn Morshower, as the father of Lucy and Lois (the newspaper writer back in Metropolis).

Like many of the characters on Supergirl, Samuel Lane originated in the comics, usually facing off against Superman rather than acting as an ally to the Man of Steel despite his daughters' associations with superheroes. He started off as a General in the United States Military before working as the Secretary of Defense while Lex Luthor was President (yes, that happened in the comics). However, Sam's most significant history in the comics is his work on Project 7734, a covert operation led by General Lane with the mission to protect humans from extraterrestrial threats — which included Kryptonians like Superman and Supergirl. Through Project 7734, Sam Lane worked with some of Superman's biggest enemies like Braniac, Doomsday, and Reactron.

So what does all that mean for the version of General Sam Lane that will appear on Supergirl? Well, according to the official synopsis for "Red Faced" it seems like the General's actions on the show won't be too far off from his time commanding Project 7734. The Red Tornado that Supergirl faces is "a military cyborg commissioned by ... General Sam Lane." Plus, a promo clip from "Red Faced" offers additional details about Red Tornado and the General's feelings about having "foreign assistance" from Supergirl. Per General Lane and the scientist that developed Red Tornado, it is an "anti-insurgent combat device," or more specifically, an "anthropomorphic pseudo entity with combat capabilities" — so it's a bit more complex than a robot.

Although it seems the General will be cooperating with the Department of Extranormal Operations, Hank Henshaw, and Alex Danvers, he makes it clear that he doesn't approve of their organization or their work with Supergirl. Additionally, there's something incredibly antagonistic about the way the General and his daughter force Supergirl to work for them, giving me the impression that he isn't too far away from declaring his outright hatred of all alien life on Earth, including the famous Kryptonian cousins. Besides, what other reason could the General have to commission Red Tornado if not to battle extraterrestrial "threats" like Supergirl?

Of course, when Red Tornado goes rogue, Supergirl has to stop the cyborg, so General Sam Lane's antagonism probably won't be at the forefront of "Red Faced." However, with Lucy sticking around National City and General Lane unafraid to commandeer Henshaw's field agents, specifically Supergirl, this may be the first we see of him, but it certainly won't be the last.