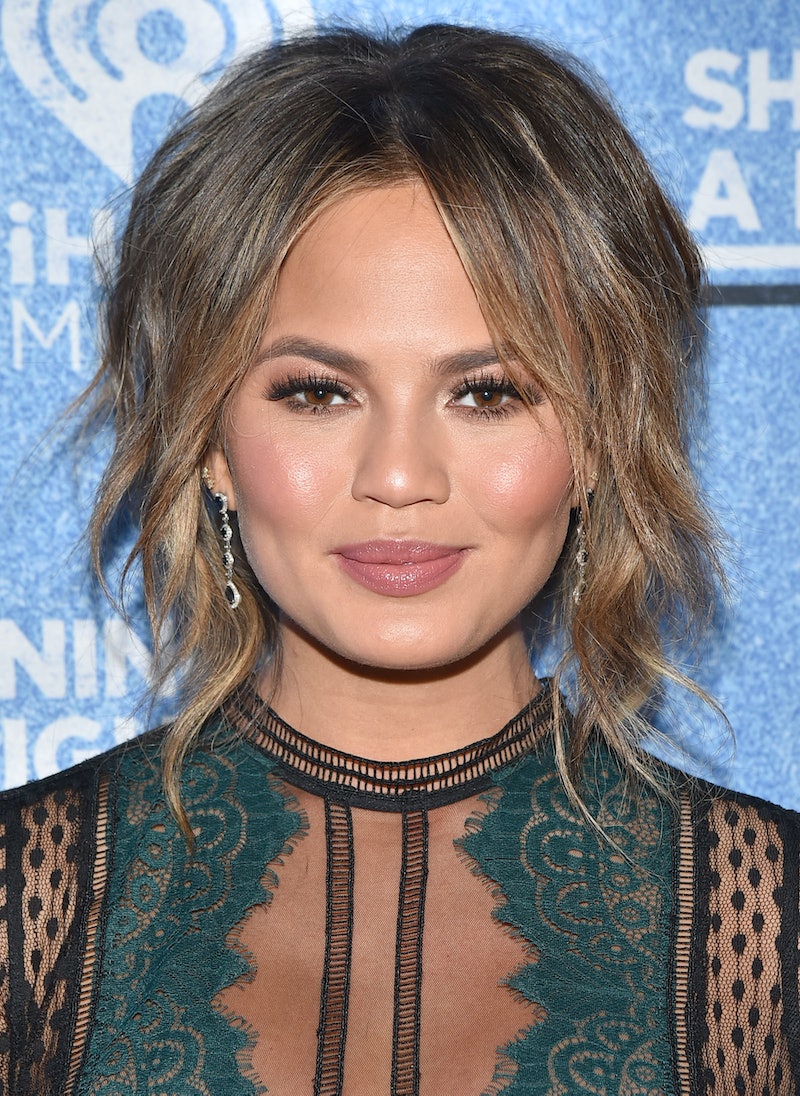 Now that Thanksgiving is over, we can all focus on the holiday that really counts: The birthday of one of my favorite celebrities. On Monday, November 30, Chrissy Teigen turned 30, and she and husband John Legend have already celebrated the occasion with one of the most impressive birthday parties ever. The birthday girl and her guests celebrated with a personalized menu at New York restaurant Momofuku, followed by a trip to the Comedy Cellar where Dave Chappelle performed — complete with a serenade from Legend, because duh. What more do you need to signify the passage of another year besides good food, jokes, and good company? Answer: Nothing.

And even though Monday is technically Teigen's day, really, we should all be celebrating. Because not only do Teigen's social media posts always keep her fans laughing, but the recipes she shares on her cooking site are already making me a better chef. And through her tweets, where she is particularly outspoken, especially about topics that are sometimes uncomfortable for people to talk about, she's passing along valuable life lessons to the one million people who follow her.

Happy birthday, Chrissy Teigen! Here are 30 important lessons she's used Twitter to teach the world — one for every year of her life so far.

1. When You're Cooking Dinner, Make People Wait As Long As Possible

She's right. When you're hangry, everything is the most delicious food you've ever tasted. And although Teigen is obviously a skilled chef, this is a perfect technique for people like me who aren't as savvy in the kitchen.

Especially not when they're the kind of people who take time out of their day to send hate to complete strangers via Twitter. To the left, y'all.

3. It's Never OK To Blame The Victim

When celebrity nudes leak (or anyone's nudes, really), it's not their fault. The person to blame? The same one who's profiting from something bad happening to someone else.

4. Don't Judge Others If You Don't Want To Be Judged Yourself

That's just not fair! Can we just be nice to each other?

5. Writing A Book Is Hard

As someone who has had a lifelong love of writing, I can attest to this one. However, I don't doubt that Teigen's cookbook is going to be amazing.

6. We Should Never Tolerate Cyberbullying

This tweet was in reference to Peeple, the app that calls itself "Yelp for people." If something similar had existed when I was a teenager, it would have made my life miserable, and it's important that we keep it from happening to kids (and all of us) now.

7. Loving Animals And Eating Meat Does Not A Hypocrite Make

People will have differing opinions on this one based on the lifestyles they choose to live, but maybe it's better if I just do me and you just do you and we all leave each other alone about it? I love my cat and cheeseburgers, and I don't want to apologize for it either, just like Teigen.

8. Just Put Your Carry On Under The Seat In Front Of You

Then we can all take off faster. Geez.

9. The Most Quotable TV Character Of All Time Is Michael Scott From The Office

"Sometimes, I start a sentence, and I don't even know where it's going. I just hope I find it along the way."

10. We Have To Work Together To Free The Nipple

Nipples are not offensive. What's offensive is that there are people who think nipples are offensive.

11. We Need To Treat Each Other Well, Regardless Of Our Differing Cultures

We're all sharing a planet! Let's be understanding of each other.

12. It's OK To Call People Out When They Make You Sound Ridiculous

The Doritos thing was a joke, guys.

I feel ya, Teigen. Anytime I've written something that people don't agree with, I am flooded with tweets myself — and they're all usually so kind (not).

14. Once Kate Middleton Has Taken Your Baby Name, It's All Over

I, too, held my breath as we waited to find out what Princess Charlotte's name was, because if she'd chosen the same name as the one I've planned for my future daughter, I would have been heartbroken.

It's so magical when basically anything you want to eat can arrive at your doorstep, and all you have to do is make a call.

16. If Someone Calls You Out On Twitter, Just Call Them Out Right Back

Sometimes, it's best to rise above. Other times, get ready for that clap back.

If you're going to tweet ridiculously hateful things, Teigen isn't afraid to bring on the consequences — nor should she be.

18. Speaking Up About Serious Issues Is Important

In this case, Teigen was talking about the shooting in Ottowa last year. Remember how I pointed out earlier that she has tons of followers? Using that kind of influence to draw attention to what matters is an awesome power to have.

19. You Should Never Be Ashamed To Eat

Food is delicious. Don't deny yourself!

20. Don't Be Afraid To Make Fun Of Yourself

If you follow Teigen on Twitter, you already know she does it all the time — and it makes her that much more real.

21. "Graduation" By Vitamin C Is A Universally Emotional Song

Listen to it. Try not to cry as you think of the high school friends you'll never speak to again. You can't do it, can you?

22. Just Don't Ever Leave Anyone Voicemails

It's wasted effort. No one listens to them. I know I don't!

23. We All Do Embarrassing Things

To be fair, Never Been Kissed is a great movie.

It only leads to bad things, and every symptom is cancer.

25. Asking About The State Of Someone's Uterus Is Pretty Rude

Just don't do this. If someone wants you to know whether or not they plan to have a tenant in said uterus, they will tell you. You will not have to ask.

26. Periods Are A Very Confusing Thing

This is probably an all too familiar experience for most of us.

27. Beyonce & Jay Z Have The Power To Make Anyone Look Cool

Mystery photoshopper, I would like one of these framed to keep.

She knows what's up.

30. And The Most Important Lesson Of All

Can we all just agree that Teigen is the best? Happy birthday, Chrissy! Please never quit Twitter. Ever.