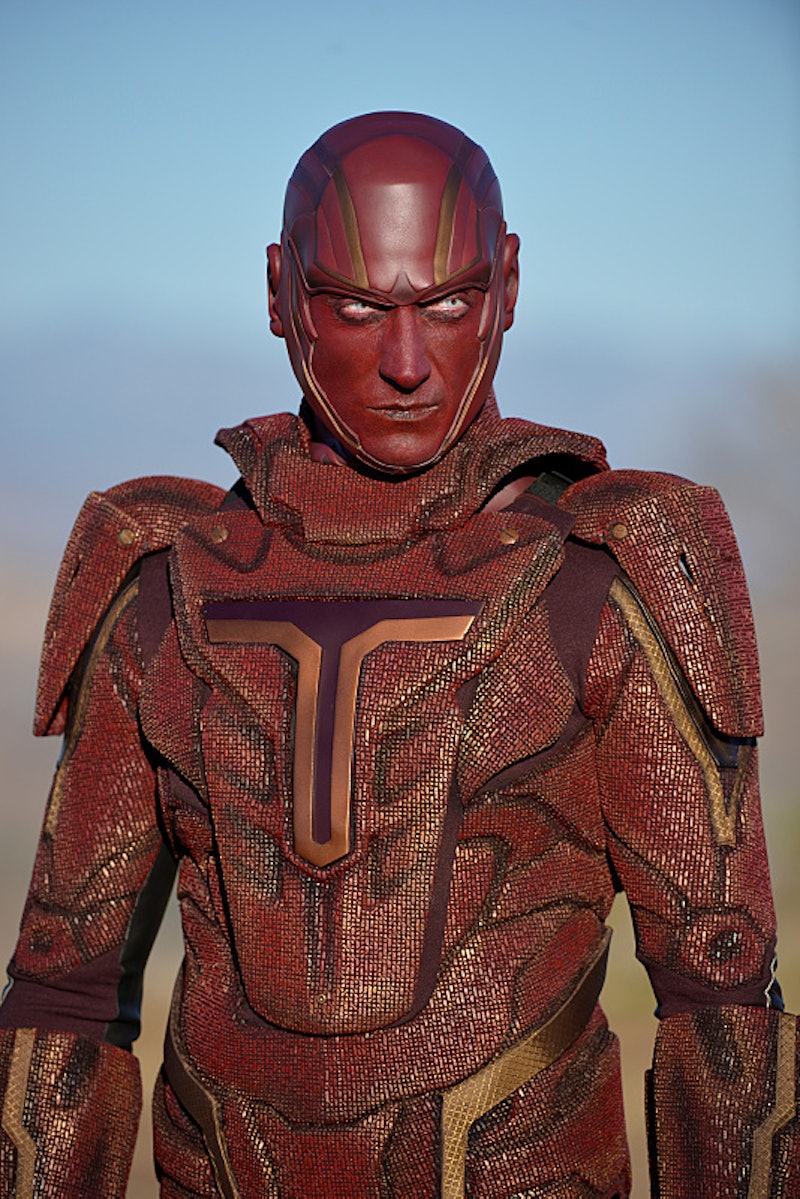 Already in the first season of Supergirl, the show's titular superhero has faced down a number of DC Comics villains like Reactron, Livewire, and even Kara Zor-El's evil Aunt Astra. Now Supergirl will not only meet the famous military father of Lucy Lane, General Sam Lane, but work for him testing a new combat device. In "Red Faced," Supergirl will introduce Red Tornado and Dr. T.O. Morrow, a military-commissioned cyborg and its scientist creator, respectively, both portrayed by Iddo Goldberg. In Monday's episode, the Girl of Steel will go head to head with Red Tornado when it goes rogue, but who is Dr. Morrow and what is his creation exactly?

In the DC comics, Thomas Oscar Morrow, shortened to T.O. Morrow, is the world's foremost expert in robotics with a genius-level intellect who has dedicated his life to studying the future of tomorrow — T.O. Morrow, tomorrow, get it? As part of his work, he invented a device that allowed him to see into the future, and another device that allowed him to steal technology from the future, which is how he developed Red Tornado in an attempt to defeat Superman and the Justice League of America. As for the aerokinetic android Red Tornado, although he was created by Morrow with villainous intent, he went on to be a hero and worked with the Justice League of America.

According to the official synopsis for "Red Faced," it seems the two may have switched their good/evil loyalties, with Morrow developing Red Tornado as a way to help the military fight extraterrestrial foes, and the cyborg going rogue forcing Supergirl to take it down. Of course, from the way General Sam Lane and Dr. Morrow talk about Red Tornado — calling it an "anti-insurgent combat device" and an "anthropomorphic pseudo-entity with combat capabilities" — it doesn't seem that they developed the cyborg to have thoughts of its own, certainly not enough to be able to align itself with either good or evil.

Additionally, although it may seem like Dr. Morrow is just doing what he's told by the military in developing Red Tornado, I can only wonder how technology as advanced as the cyborg could go rogue. Certainly a genius like Dr. Morrow would have prepared for every kind of malfunction! So, did Red Tornado develop its own consciousness and decide to go rogue? Or is it following secret orders given by Dr. Morrow unbeknownst to General Lane and Supergirl?

If we go by Dr. Morrow's comic origins, then he may be the mastermind behind Red Tornado's reign of terror on National City in "Red Faced," but everything isn't always what it seems on Supergirl, and we won't know for sure until the cyborg's motivations are revealed. At the very least, though, we'll get to see Supergirl fight a robot — oh, excuse me, Dr. Morrow — I mean, an anthropomorphic pseudo-entity.