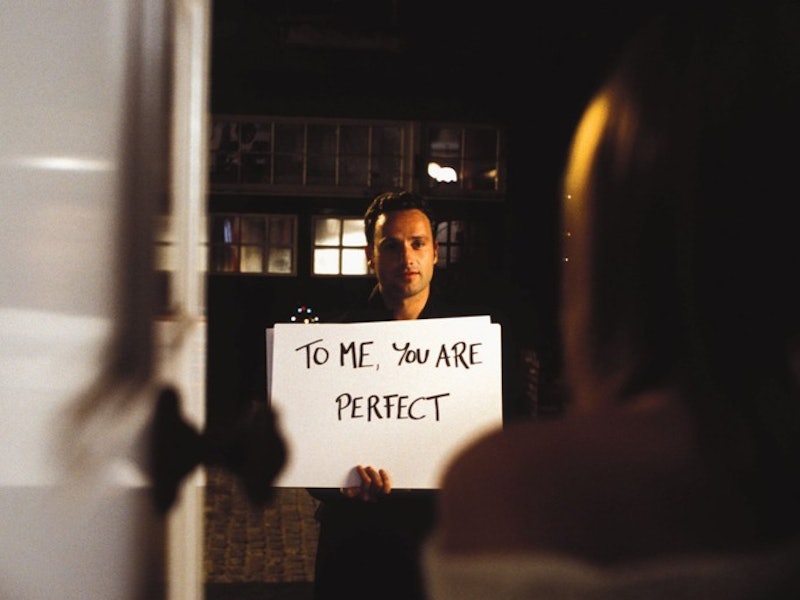 I don't celebrate Christmas, but there are some Christmas movies I love to watch. Like Love, Actually, actually. But my relationship with the beloved film isn't all love. Here's the rub: Most of the questionable plotlines I can forgive because I love the cast so much, but my love-hate relationship with the movie becomes mostly hate when I recall storyline involving Keira Knightley's character and that notecard dude, Andrew Lincoln, who is now fighting zombies on The Walking Dead. It's a level of creepy that shakes me to my core, and every time she runs after him and kisses him in the street, I cringe.

If you haven't seen the 2003 movie, which has officially entered the Christmas movie canon, it has a pretty impressive ensemble cast including Colin Firth, Alan Rickman, Emma Thompson, Liam Neeson, and a young Chiwetel Ejifor. The storyline between Juliet (Knightley), her husband Peter (Ejiofor), and his best mate Mark (Lincoln) is particularly bothersome and just plain weird. Here's how it goes down: Mark is desperately in love with Juliet, and in order to hide that fact from both her and his best friend, he's basically treats her like crap to convince the couple and their friends and family that he actually despises her. So not cool.

Mark is tasked with filming the couple's wedding ceremony but doesn't want to show Juliet the footage (as if neither she nor Peter were going to ask for it?). After the wedding, Mark continues to be a cold prick to Juliet, but she invites herself over and asks for the wedding tape, only to discover immediately that it's all creepy, stalker-y zoomed in shots of her. She's like, "Oh, are you going to murder me?" Just kidding, though that would be my thought. Instead, she seems to accept and even feel bad about his creepy love, actually, and he runs away.

Later in the film there is a scene involving Mark's giant notecards and declarations of love. The logic of this scene is absurd: Mark shows up at Peter and Juliet's house with a CD player (it was 2003) and the very inappropriate notecards that profess his love to her. How did he know that Juliet was going to open the door? What if it had been Peter? For his audience of one, he flips through the cards, which reveal that he is there with "no hope or agenda." But is that really true? Because if he really has no agenda, he wouldn't have come in the first place!

One card says: "To me, you are perfect." Another says: "My wasted heart will love you 'til you look like this [insert image of a time-ravaged skeleton]." Juliet laughs. My reaction would be to slam the door and get a restraining order. What is Mark implying here? That even though he's likely going to be in Juliet's life forever (being Peter's best friend), she'll have to deal with his obsessive-love feelings?

After he's done with his confessions he walks way. Juliet runs after him and gives him a kiss. What would her husband Peter think? To me, this movie feels like a film in which a lot of terrible things happen to people, and they react without thinking of the consequences. Mark's storyline is the shining example of this. But despite this questionable scene, I still love to watch Hugh Grant dance. And I suppose I always will.

More like this
22 Movies On Netflix That Are Perfect For The Whole Family
By Bustle Editors
What's New On Netflix: A Third '365 Days' Movie & Lili Reinhart’s New Film
By Arya Roshanian
Twitter Is At Odds Over Taylor Swift’s Possible ‘All Too Well’ Oscar Run
By Brad Witter
Revisit 1992’s 'A League Of Their Own Cast' Photos After The New TV Series
By Grace Wehniainen
Get Even More From Bustle — Sign Up For The Newsletter