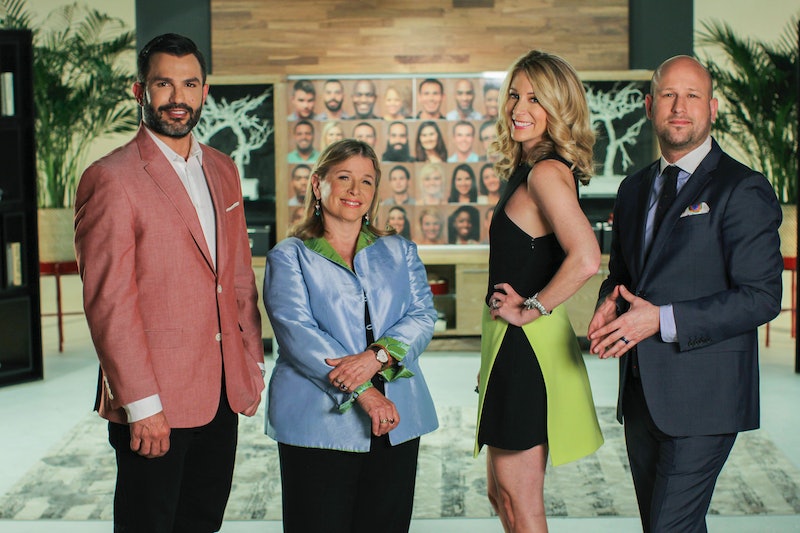 It's that horrible time of the year where most of my favorite shows are taking their holiday hiatus, but there's an upside to all these midseason finales: They make room for more shows to premiere! This Tuesday, December 1, Married at First Sight is back for Season 3, and that means three brand new couples will be tying the knot (and hopefully falling in love) after meeting at the altar for the first time. Of course, the last season of the show may not have had the best results — none of Season 2's couples are still together — so here's hoping there's better luck ahead for the Married at First Sight Season 3 couples. After all, the experiment has worked in the past, right?

Unfortunately, not too much has been revealed about this season so far — probably because seeing who's matched with who on the show is half the fun — but FYI has released bios of each of this season's participants. Those bios, plus a little social media stalking, give us plenty of information about the cast ahead of time, and it definitely looks like it's going to be an interesting season.

Ready to meet the cast? Here are the six brave souls who are committing themselves to a lifetime with a total stranger. They deserve so many props!

According to FYI, Neil is a 31-year-old who's into outdoorsy stuff, like skydiving, which means he's already pretty used to having adventures and taking risks... like marrying someone he's never met. Unfortunately, he doesn't have much of a social media presence just yet, but it looks like he's already created a Twitter account for the show, so hopefully that will change!

David is 29, an account executive, and it definitely sounds like his reason for being on the show is pretty solid — he's ready to commit. In the past, David has had a ton of relationships, but it doesn't sound like any of them have worked out. Hopefully that all changes in the six weeks of the experiment! His Twitter hints that he's a huge sports fan (especially when it comes to the Buffalo Bills) and he's super excited about the show's premiere on Tuesday. Duh, me too.

The final male participant is also the youngest. At 27, Tres is currently works in the world of luxury cars (fancy!) but he used to play college basketball. He says he's looking for someone "fun, caring, intelligent, and athletic," and can you blame him? Unfortunately, like most of the rest of the cast, he's pretty new to Twitter. How can I stalk without any material to draw from? Come on, guys!

Sam is 30, a bank branch manager, and what she's looking for is someone to make the life she's already built for herself even better. And from her Instagram, it's obvious that Sam is a dog lover. And she should be, because look at this face:

Plus, on Twitter, she's pretty responsive to MAFS fans already, so if you have any thoughts about the premiere while you're watching, don't be afraid to let her know what you're thinking. She just might tweet you back!

Vanessa's on the younger side of the participate age grade at 26, but from her bio, it definitely seems like she's ready for marriage and everything that comes with it. She's a corporate events manager, and when she's not working, she loves writing and traveling. Same, Vanessa!

Ashley is 30, and although she used to be a social worker, these days she's studying to become a nurse. Her bio also indicates that she's looking forward to starting a family, so hopefully her match is on board with that, too! Unfortunately, her Twitter is pretty bare so far, so we'll have to wait until the show premieres to get to know her better.

I can't wait to see how the season pans out this year. Fingers crossed for better, longer lasting marriages this season!