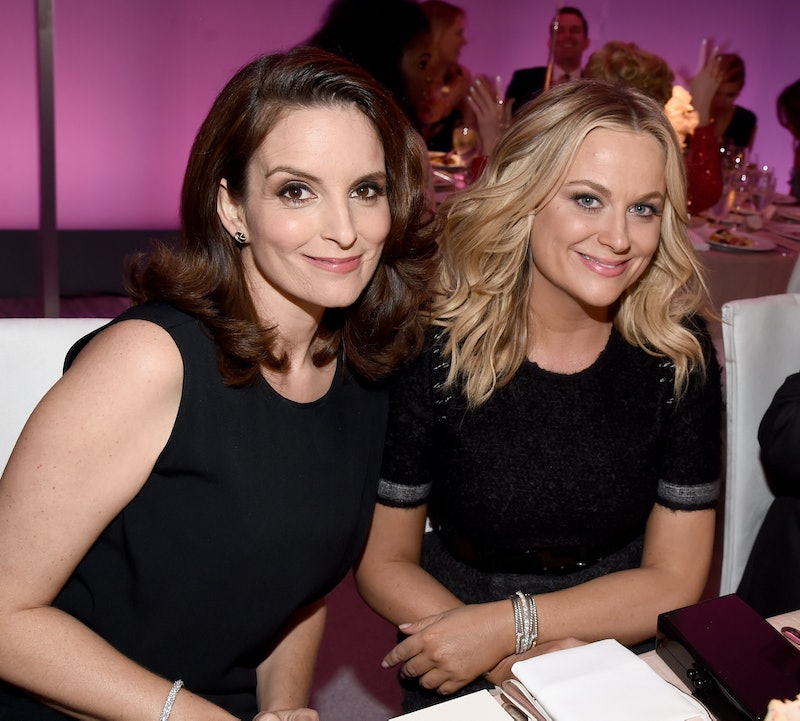 Often times we look at overwhelmingly successful people as being different somehow. Like they're divinely chosen and blessed with the enviable magical powers of confidence, good decision making, talent, and exposure. A winning combination that us mere mortals could never attain. But, in their most recent interview with Glamour, Amy Poehler and Tina Fey talk careers and ambition and subsequently set the record straight. The two entertainment mavens and makeshift mentors prove through their own experiences, that success isn’t magical, it’s messy.

Because of Poehler and Fey’s outstanding humor and all around gaiety, it can be difficult to look past that enticing facade and see actual flawed human beings underneath. But they have in fact experienced the same uncertainties, set backs, and crippling fear like I know I — and a good few of my fellow struggling millennials — have. The thing is, though, they didn’t let their anxieties stop them. In the interview, Poehler and Fey each take turns praising the other not for their wit, but for each other’s hard work, dedication, and their bravery. It’s an unintentional lesson well learned for us readers, because they surprisingly credit those virtues above even their superior talent for their success.

To make the two powerhouses even more accessible, Poehler and Fey’s Glamour interview comes in the form of questions posed on social media by the magazine’s Instagram followers. According to Glamour, the enlightening exchange started with Fey saying,

OK, Glamour’s Instagram follower @formerly_flores asks, "What is the life accomplishment you are most proud of and why?"

Poehler, being her typically humble self deflected and responded with perhaps an even better idea:

Why don’t I tell you what I think is one of your accomplishments and you tell mine? I feel weird talking about my own. I think one of your greatest accomplishments was transitioning from the captain you were at SNL to creating a show [30 Rock]. That is so hard — extricating yourself from a place you were so comfortable and successful, then doing something else so well. That, and the fact that you invented the word "flerm."

Total BFF goals aside, does this sort of uneasiness Poehler refers to sound familiar to anyone else? Apparently, even living legends have an onerous experience trying to leave their cozy comfort zones.

But it's perhaps Poehler's further discussion on the matter that every scared twenty-something or thirty-something should print out, frame, and hang on their bedroom wall for inspiration and frequent reassurance. The actress wisely states,

You can frame [a transition like that] two different ways. You can think, Oh my God, what’s next? with a fearful sense of what’s around the corner. Or, Oh my God, what’s next? Isn’t that exciting? I didn’t have any kind of map as to what my life was going to be. So the idea that here we are in our forties — I wouldn’t even be able to predict what’s ahead. So maybe [the key to new challenges is] a bit of improv training, denial, enthusiasm — and having a nice place to land, where you feel supported if it all goes to sh*t, which feels like it’s about a year away. [Laughs.]

Did you hear that, guys? Optimism, training, denial, enthusiasm, and a sturdy foundation is the recipe for success. Hope you wrote that all down.

Fey also found it important to note that success isn't only what you can do for yourself with what you've attained; it's how you take that earned privilege and use it to try and help benefit others. She lauded Poehler, saying,

I would say that one of your greatest accomplishments, Amy Poehler, is that you have so successfully used your art and comedy as a source of positivity in the world, by creating Smart Girls [an online community for girls, encouraging them to be their authentic selves], by making [Leslie in] Parks and Rec not only a positive feminist character but creating a good-hearted worldview within that program.

I don't know about you, but think it's time we left Mr. Miyagi to the Karate Kid. With their candid guide to success disguised as an interview, we should let these impressive ladies take up the mentor mantle. Their words of encouragement and sage yet relatable advice, has solidified them, to me at least, as bonafide idols. Mostly though, what I've gotten out of this interview is that most exchanges between Poehler and Fey turn into free self-help crash courses, and that I should probably eavesdrop on them more often.