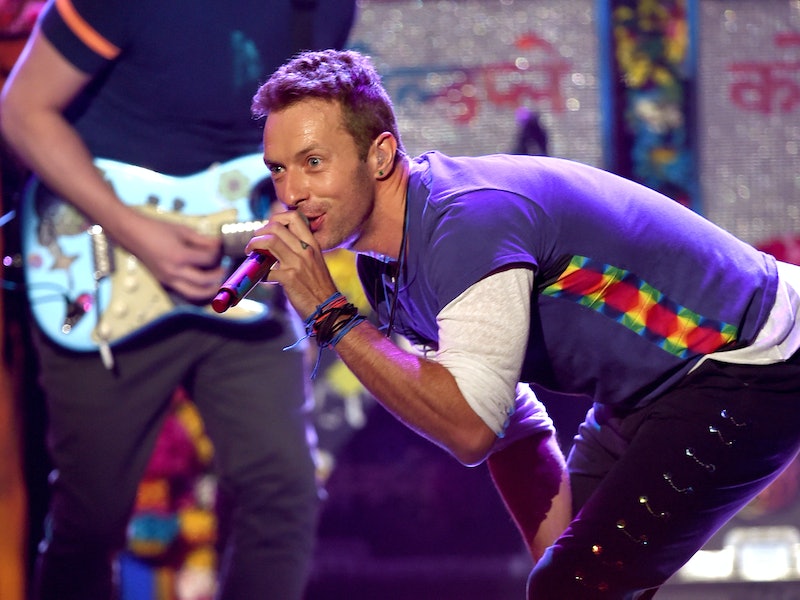 I have loved Coldplay since I first heard "Yellow" and have loved Beyoncé since Destiny's Child, so when I heard they were collaborating on a track for Coldplay's next album, A Head Full of Dreams, my head was full of dreams at all the possibilities that could happen with these two musical geniuses. On Monday, Coldplay dropped their song featuring Beyoncé, "Hymn For The Weekend," and it is GOOD. The track is much more of a club anthem than we usually hear from Coldplay, and Beyoncé's influence is strong, so many will wonder: How did this collab happen? Are Beyoncé and Chris Martin friends?

Turns out, Martin and Beyoncé have known each other for almost a decade, so this certainly helped this collaboration come true. Martin is a huge Beyoncé fan and wanted her to be part of the album in any way. He told Ryan Seacrest,

We said, "We have this song that sounds really good, is there any chance you can come in and make it sound brilliant? Can you lend us a little bit of your excellence?" That’s one of my favorites, one of the centerpieces of the [album]. A lot of other songs were written around that.

Aww. I love the idea of Chris Martin still getting nervous or shy about asking his friend Beyoncé to sing on a track with him. The two got close through Beyoncé's close connection with the frontman's ex-wife Gwyneth Paltrow, and they all met at an NYC benefit concert around nine or 10 years ago. Paltrow shared of their meeting with Howard Stern,

We all became friends... I normally don't do that, but [we vibed] in that particular case... They're the greatest people. They are funny and sweet, and self-aware and really intelligent.

Over the next few years, Beyoncé and Paltrow were seen at events together and spoke about their friendship. Martin also got closer to Beyoncé's husband, Jay Z, and Jay opened up about their friendship to The Mirror . When asked about how Martin's kids call him Uncle Jay, he gushed, "They are a really cool family with beautiful kids, who happen to be good at the jobs they do."

This is actually not the first time Martin and Beyoncé have taken their friendship into their music. The pop star performed "Halo" for the Hope For Haiti Benefit in 2010, and Martin joined her on the keys in a beautiful duet.

Fast forward a few years, and Beyoncé is now featured on one of Coldplay's biggest tracks, and it's no accident. Even after Paltrow and Martin's divorce, the friendship between both pairs remains strong. Martin talked to The Wall Street Journal about the featured guests on the album, which also include Paltrow and Beyoncé and Jay Z's daughter, Blue Ivy. He said,

Everyone who got asked to sing on our album has an important part in our lives. This is The Wall Street Journal, so I don’t want to get too hippie, but what I’m trying to learn in my life is the value of every human... The “choir” started with my two kids coming in after school and recording. We recorded Blue Ivy Carter in New York when her mom Beyoncé was in the studio.

If Beyoncé and Jay Z are cool with Blue Ivy performing on a Coldplay track, they must be very close. I think Beyoncé and Martin need to stay friends and collaborate more music in the future — for all of our sakes.