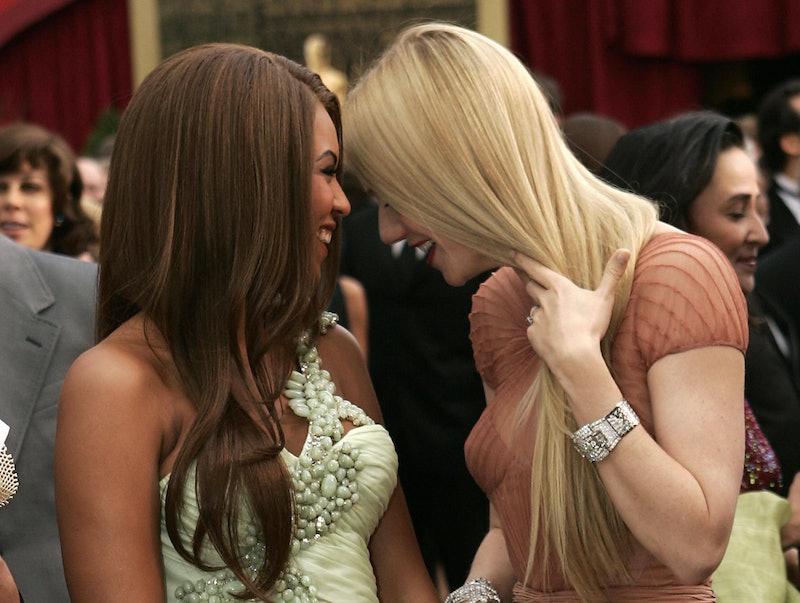 Audiences watching the 2015 Grammys waited three-and-a-half hours for one thing and one thing only: Beyoncé. But before the singer took the stage to close out the very, very long night with "Take My Hand Precious Lord," we were treated to an introduction from one member of Queen Bey's celebrity court: good friend Gwyneth Paltrow. And, yes, what the actress said before the singer performed is true. Beyoncé and Gwyneth Paltrow are friends, in fact.

Not that we got too many other details. Paltrow only quickly referenced the duo's friendship during her short introduction (which, naturally, irked viewers and fans of Beyoncé who believed the actress was turning too much attention to herself):

To sing "Take My Hand Precious Lord," that was first sung to her by her own mother, here is my beautiful friend, Beyoncé.

But where did this kinship begin? According to an interview Howard Stern conducted with Paltrow, the duo met during a benefit in New York City last decade. As Patrow said about meeting the singer and Jay Z while with ex Chris Martin, "We all became friends ... I normally don't do that, but [we vibed] in that particular case."

And since meeting, Paltrow and Beyoncé only continued to get closer. Not only did has the singer stayed in Paltrow's home, but Us Weekly has reported that the actress has helped Beyoncé get through some rough patches in her relationship with Jay Z. And that includes whatever happened in that elevator following the 2014 Met Gala — Paltrow told Stern that she called the singer after video footage hit the Web.

In fact, Beyoncé has also talked to press about their relationship, and how the duo have bonded as mothers of daughters — in Beyoncé's case, 3-year-old Blue Ivy, and, in Paltrow's case, 10-year-old Apple.

She is incredible ... She's a great friend on every level. I think for us, protecting our daughters is so important and … keeping things on our own terms, so I will still be protective and make sure [Blue Ivy] has a childhood and a great time.

The greatest perk of being [Beyoncé and Jay Z's] friend is that I have a relationship with people who are also—who have similar ... Obviously I'm not as famous or successful as they are, but I do have a life in the public eye and I have people to sort of walk through life with in that capacity, and they're very kind and loving people.

So, yes, Paltrow and Beyoncé are close friends. But that doesn't mean fans are happy about it.

Still, can't we all just read this quote below and admit that this is the one time we can truthfully say: Gwyneth Paltrow is just like us?

When she is working onstage, she has more power than any woman I’ve ever seen. She would never say it and has never said it, but I feel she knows with every fiber of her being that she is the best in the world at her job.

We'd want to be friends with the "Drunk In Love" star — so why begrudge Paltrow?