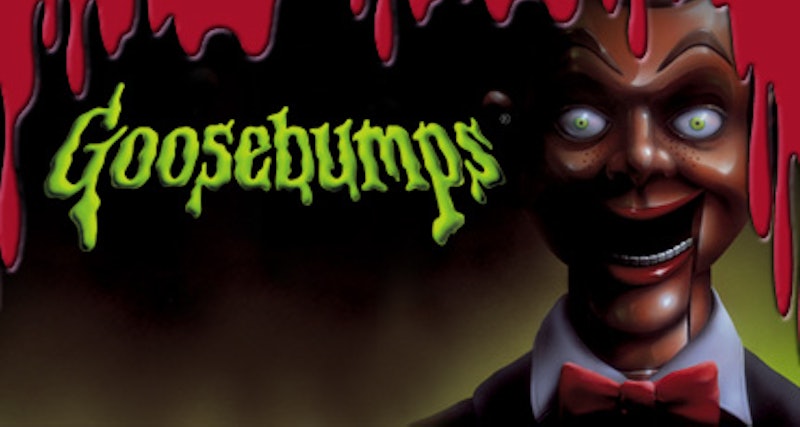 When many American Horror Story devotees (like myself) were children, they were being terrified by plant monsters, ventriloquist dummies, and even evil cameras on Goosebumps. Sure, we grew up and realized that real, grown-up horror (and the real world! Fun!) was way scarier than anything on the R.L. Stine TV series, but that doesn't stop Goosebumps from being loads of cheesy '90s fun. And thanks to this brilliant thing called Netflix, we're able to relive all of that via our Instant Queue. Netflix is currently streaming the first season of the series for your enjoyment. Here are five episodes you should definitely re-watch.

Thank God we've moved into the digital age, because Polaroid cameras are actually terrifying. In this one, a young Ryan Gosling (A YOUNG RYAN GOSLING!) plays a kid named Greg who just wants to take cool photos with his (gigantic) new camera. Unfortunately, the camera is both outdated AND evil. No wonder terrible things start happening.

"Piano Lessons Can Be Murder"

Ugh, remember when your parents forced you into rewarding activities like tennis, ballet, and piano lessons? And remember how this episode made you beg your parents to stop forcing you? After all, it focuses on a teacher who wants to STEAL HIS STUDENT'S HANDS. Goosebumps was basically just a kid's version of Criminal Minds.

"The Return of the Mummy"

Exploring the pyramids sounds really fun, until you're being chased by an awakened mummy. Then it sounds like the best time ever.

"Stay Out of the Basement"

In this particularly strange episode, two kids are shocked when they learn that their dad isn't actually their dad. He's actually a plant impersonating their dad. Because, of course. He also bleeds green and eats plant food. (In a horror series where blood is a no-no, you gotta creep the kids out somehow.) This episode convinced a ton of anxious kids that their parents were really plant people. And scared them away from wheat grass juice for life.

"Night of the Living Dummy"

Chucky has nothing on the creepiness that was Slappy, the talking and terrifying ventriloquist dummy. He was so scary that he dominated three separate Goosebumps episodes. Currently streaming on Netflix is the second "Night of the Living Dummy" episode, in which a young girl is blamed for Slappy's shenanigans (and by shenanigans, we mean shenanigans like slapping her Dad across the face and trashing her room). Did your Tickle-Me-Elmo ever do that?).

More like this
17 Hilarious British Comedies On Netflix
By Sophie McEvoy and Sabah Hussain
Here’s Everything Coming To & Leaving Netflix In June
By Alyssa Lapid
'Black Mirror' Season 6 Is Reportedly In The Works, Here’s What To Expect
By Maxine Harrison
Jennifer Aniston Joked About Ending 'Friends' With Therapy & Divorce
By Grace Wehniainen
Get Even More From Bustle — Sign Up For The Newsletter