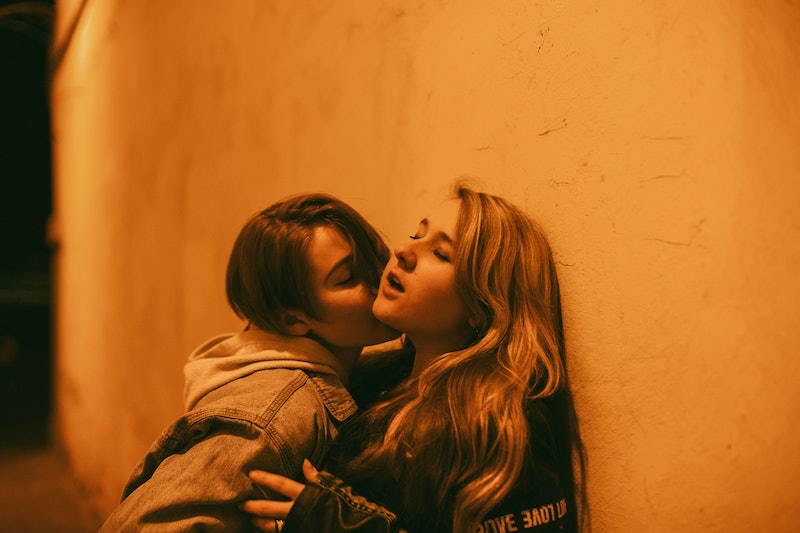 How old were you when you first learned about what a hickey is? Those purplish bad girl badges proudly worn on the necks of cool, sexy older kids to prove that they had canoodled the night before. Was it when Rizzo bragged about hers in Grease? Now that we are older, hickeys aren't as thrilling as they once were — at least that seems to be the case for many. They are considered to be more of an embarrassing inconvenience than a fun one. Of course, the hickey still has its adult fans who find it to be a sexy reminder of wild youth, but others view it as a mark of sexual immaturity. While one's thoughts on such love bites are completely up to personal opinion, what are some indisputable facts about hickeys?

Well, for starters, a hickey is really just a bruise that appears on your neck (or thighs or breasts or stomach... any part of your body where you can be kissed, really) after a partner has been licking, sucking, and biting on the same area of flesh for a lengthened period of time. Dr. Sydney Spiesel told NPR, "What happens is actually pretty simple... The administer of the hickey applies lips to the neck and creates a vacuum. And if that vacuum is strong enough, the little capillaries in the skin break and they cause what doctors call, 'ecchymosis' and what normal people call a 'bruise.'"

If you find yourself with one of these love bites after a romp with bae and you don't want your co-workers or friends to notice, there are a few tricks that people swear by — ranging from the application of a cold spoon to rubbing the purple area with toothbrush bristles to concealer tricks to fashionable scarves. Beyond figuring out how to hide a hickey, what else can we learn about them?

1. Scientific Studies Of Hickeys Began In The Animal Kingdom

Havelock Ellis, a psychologist born in the 1800s, wrote about evidence of ~love bites~ in nature for the academic journal Studies in the Psychology of Sex. Ellis's research noted that male mammals frequently held female mammals' necks between their teeth before mating. Ellis analyzed the activity in an old-school fashion, relying heavily on heteronormativity and the gender binary, he explained the neck nibbling as an instinct and representation of male domination and female submission. Thankfully, we now know that it is a non-gendered form of sexual expression.

2. They Are Discussed In The Kama Sutra

In Chapter Five of the ancient Indian texts on sexuality, hickeys are referred to as "coral and the jewel." The Kama Sutra contains lines that detail the process of giving and receiving hickeys, stating it is a "bringing together the teeth and the lips... where the lip is the coral, and the teeth the jewel." The texts stress that the love bite "ideally needs to be performed by excellent teeth free of defects," as summarized by Swept.

3. Their Healing Speed Depends On Your Overall Health

Certain bodily characteristics can delay your physical ability to get rid of the bruising in a timely manner. If you already have an iron deficiency, you bruise more easily regardless, so it's easier to get hickeys and harder for them to fade quickly. Good health and wellness in general will help your body to repair the broken capillaries at a faster rate, and that can be as simple as staying well-hydrated and eating things besides junk food.

4. If You Have A Hickey In Your Dream, It Might Not Represent Anything Sexual

Surprisingly, dreaming that you have a hickey does not necessarily hint at sexual undertones — at least according to most dream analysts on the internet. Rather, it symbolizes a battle between the head and the heart, or "a split between emotional and rational thinking." Are you torn between logic and emotions when it comes to an impending big decision? A hickey in a dream may also symbolize that you are drained by a toxic relationship or a stressful choice, either physically or emotionally.

5. Can A Hickey Almost Kill You In A Freak Accident?

Terrifyingly, yes. At least that's what happened to one woman in New Zealand back in 2011. An enthusiastic lover was sucking on her neck, leaving a hickey, when she suffered a small stroke. Doctors discovered that the hickey had created a blood clot near a major artery, causing the brain injury and leaving her left arm paralyzed. Thankfully, she made a full recovery.