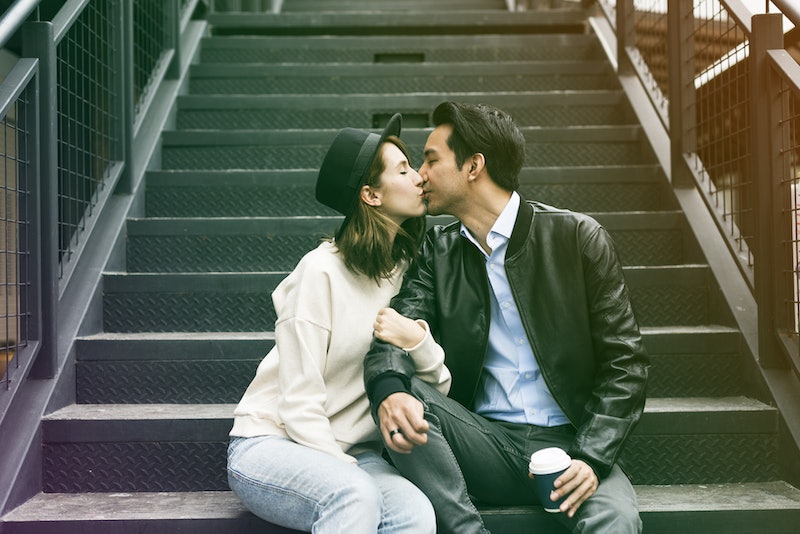 They may seem innocent enough, but sometimes the side effects of hickeys are pretty bad. In fact, hickeys are one of the most common sex injuries out there. Yes! While they may be proof, albeit very obvious proof, that you’ve gotten some sexy times, the downside of hickeys can often outweigh the upsides. Hickeys can be bad news bears, to be honest, and not just because your parents grounded you for them in high school.

"Love bites, or hickeys, are a red mark or bruise caused by kissing or sucking on the skin," Dr. Diana Gall, of Doctor-4-U, a confidential online doctor service, tells Bustle. "The mark is caused by blood vessels underneath the skin rupturing, this is why the longer or harder you suck on the skin, the darker and longer the mark lasts because more blood has been drawn."

According to Dr. Gall, hickeys can last up to two weeks, depending on the severity of them, slowly dulling in color as each day passes. Before long you have a nasty looking yellow-brown spot, like any other bruise, that eventually fades completely. But the life of a hickey may not be the biggest concern for you.

The next time your main squeeze goes in for a bite or suck, you may want to reconsider. I mean, they won't kill you (well, hopefully not), but they may not be something you want either. Talk it over with your partner and decide on what you're both comfortable with.

Here are six things you may not know about hickeys.

Although they require much more effort to get than, say, walking into a coffee table or face-planting it on the sidewalk, hickeys really are just bruises. In some cases, hickeys are intentional bruises, as either a way of "marking" one's territory or because of certain types of sexual play that both partners agree to. While other times they're a total accident.

"When the skin experiences suction (similar to cupping in Chinese medicine) some of the surface blood vessel burst from the pressure," Dr. Sandy Skotnicki, dermatologist and author of Beyond Soap, tells Bustle. "This blood escapes the vessel and deposits in the skin — this is a hickey."

2. Some People Are More Susceptible To Hickeys

As is the case with most things in life, some people are more susceptible to certain things than others. Deficiencies, especially, can make a body react differently with one person than another.

"Just how some people bruise more easily than others, the same goes for hickeys as they are essentially the same thing," Gall says. "This can be from a number of reasons such as having weaker blood vessels, thinner blood, or vitamin deficiencies."

According to Skotnicki, people with thinner or more sensitive skin also, for obvious reasons, end up with hickeys much easier than others, especially if that sucking is really hard. Meaning, that the hickey-giver really wants to leave their mark.

But as Gall explains, hickeys and the bruises that they are, are usually nothing to be concerned about "unless you start suddenly bruising more easily, or start noticing other symptoms too."

If that's the case, then it's time to see a doctor.

According to the World Health Organization, 3.7 billion people under the age of 50 have HSV-1, or what's commonly known as oral herpes. This strain of herpes that affects 67% of the world population, which is basically a cold sore, is so common and so easily transmittable.

"If your partner has oral herpes they can pass the virus on through a hickey," Gall says. "Though the hickey-giver would have to have an active cold sore and shouldn’t be engaging in sexual contact anyway!"

I mean, if someone has a visibly open sore and leans in to kiss you, that's definitely poor form on their part. It's not just rude, but irresponsible. And if you're not into it, let them know.

"Anyone who has an open sore on the mouth form a cold sore (oral herpes) can possibly transmit the virus when kissing," Skotnicki says. "Transmission would be increased with a pressured kiss which results in a hickey."

In other words, if your partner has an oral herpes outbreak, save the kissing for another time. Or if you're the one with the outbreak, be responsible and caring enough to not spread it —no matter how much you might be craving your partner.

4. There Is No Cure For Hickeys

"An ice pack or the back of a cold spoon applied soon after getting the hickey can help reduce swelling and the amount of blood rising to the surface of the skin to avoid it becoming as dark as it could be," Gall says. "Do this for the first couple of days before moving to a heat pack which will then do the opposite and promote blood flow to the area and speed up healing."

If you weren't able to get to the freezer quickly enough to ease the swelling, then Skotnicki suggests trying arnica, which is a topical herb that aids in pain and bruising.

5. Hickeys Can Leave A Scar

When it comes to whether not a hickey can leave a scar, the jury is still out. While Skotnicki says no, Gall says that, in very rare cases, a scar can be left behind or at least some sort of reminder that the hickey once occupied that spot.

"Although they aren’t usually permanent, on rare occasions they can be," Gall says. "This is usually caused by excessive sucking, the use of teeth, or picking at it while it’s healing. The scar is usually small and (hopefully) in an unnoticeable place though, so no need to worry."

Since it's the picking at the hickey that can cause the worst damage of all, just leave the damn thing be! Let it do its thing, then it will go away on its own, leaving no proof of its existence in its passing.

6. Hickeys Can Cause Strokes

No joke. In 2011, a New Zealand woman suffered a stroke from a hickey. Apparently, her partner’s suck was so, sucky I guess, that it actually created a blood clot in her neck which led to not just the stroke, but paralysis of her left arm.

Although this appears to be the only documented hickey-induced stroke, the fact is that it happened, and you never know when the next one can strike!

Basically, no matter what sex act you engage in, always remember there's the possibility of a downside to everything — hickeys included. But as long as you're aware and always careful, meaning being aware of your limits, then that's half the battle right there.

This article was originally published on May 11, 2015