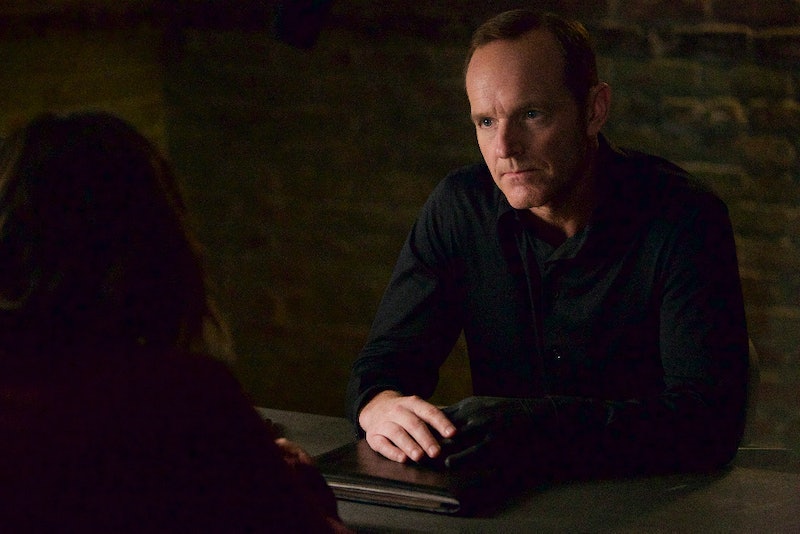 Grant Ward has been a mystery since the very beginning of Agents of S.H.I.E.L.D. and Tuesday's episode one of the missing pieces to his history. We finally met Grant's brother Thomas Ward on Agents of S.H.I.E.L.D. and I can't wait to see how this all plays out. This character has been mentioned since Season 1, and he's finally here to tell his story.

The beginning of the episode of uncharacteristically dark for the ABC series. Ward killed Rosalind Price while she and her boo were having a quiet night in, and Coulson finally snapped. He started interrogating everyone on the team about their relationship with Ward before they knew what he was. There was some major guilt tripping involved as Coulson attempted to seek out Ward's weakness. It all came down to family, so Ward found and kidnapped Thomas, played by Jason Ritter.

If you remember from previous episodes, Ward claims to have protected his little brother and feels an enormous amount of guilt for the time their older brother Christian made him come close to drowning Thomas in a well. They also have a sister, who we know even less about. However, we've heard conflicting versions of the well incident and the Ward family childhood from Grant and Christian. Finally, Thomas can give us some clarity. Right?

"He was my best friend," Thomas sad. "Protected me from Mom and Dad, even Christian." He explains that after the well, Grant changed. When the future Hydra agent burned his house down with his brother inside, Thomas decided that it was best to keep his distance. He has a good life. I couldn't be happier that someone was able to get out of House Ward in peace. "Just because you grew up in a family of abusive monsters doesn't mean you become one," he said. "I didn't."

I'm not particularly wary. I want to believe that Thomas is good. He does seem to sincerely understand how dangerous Grant is and want him to face the consequences. He was kidnapped by the supposed "good guys" and then left alone while everyone is off dealing with the Maveth adventurers. However, he helped trace Ward's location, so I'm counting Thomas Ward as an ally for now. There had to be a good egg in the bunch. Here's to hoping that Thomas returns to Agents of S.H.I.E.L.D. — I still have so many Ward-related questions for him.