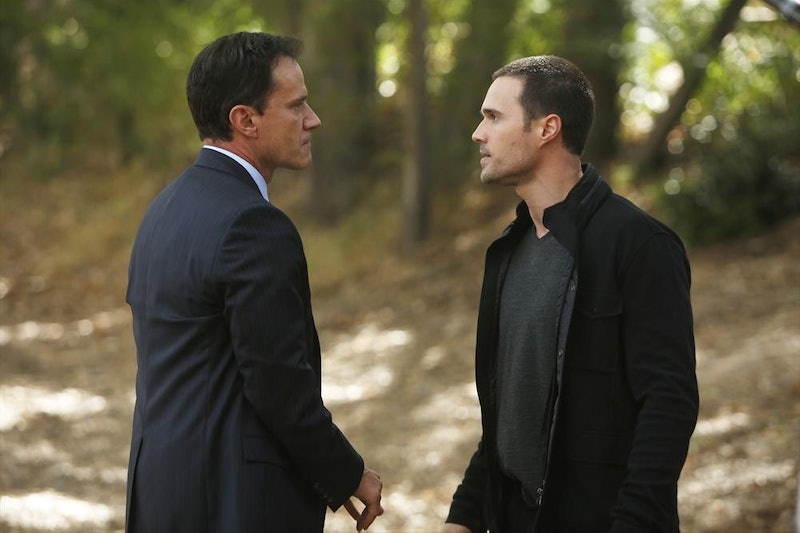 On Agents of S.H.I.E.L.D., Former Agent Grant Ward has taken the term "rogue Agent" to new heights. While Coulson and his bunch are hiding from Hydra, Ward is hiding from everyone. According to the official ABC press release for Tuesday's episode, "Ward kidnaps his brother, Senator Christian Ward, for a violent trip down memory lane." Good Lord, Wards. Also, according to the trailer for the episode, titled "The Things We Bury," someone might die? I can't deal with this kind of stress. Especially when the Ward family is involved. These wanna-be Kennedys are at the top of the manipulation game. Grant Ward insists that his older brother Christian forced him to torture their younger brother Thomas. Christian Ward insists that he once found Grant Ward torturing their younger brother Thomas with a screwdriver. You know what I want to know about, in all of this? Where is Thomas Ward on Agents of S.H.I.E.L.D .?

The three Wards also have a sister, who has yet to be named. However, she does not seem to be directly affected by this childhood trauma, so I'm most interested in Tom's whereabouts — we'll have to meet him eventually, right?

We saw young Thomas in a terrifying flashback, so we know he's not some collective fever dream that the older Ward brothers thought up together. What could that little guy be up to now?

Thomas Ward is a Teacher

You know, something totally normal. I like to think that Thomas Ward lives in the country, is beloved by his schoolchildren, and keeps himself out of trouble. He is never bothered by the memory of his brothers. He doesn't even live in Christian Ward's Senatorial District. Maybe he's married and has a family of his own. Maybe they send out a newsletter at Christmas. Everything is happy.

It's unlikely that Thomas is a S.H.I.E.L.D. Agent, considering that Grant Ward only entered the academy on the orders of his Hydra mentor. I think he's probably got a more pedestrian profession. He could also be a dentist. You know, something totally normal that still allows you to inflict pain upon others. Work out his demons in a constructive way.

Thomas Ward is a Playboy

The Ward family is supposed to be mega rich. When the mega rich don't enter business or politics (or just before they make that decision) they tend to party on the wild side. It's possible that Thomas Ward is a type of Chuck Bass these days who self-medicates his memories away.

Thomas Ward is a Super Villain

Sometimes when you are tortured as a child, you have a bit of a grudge against the world. What if Thomas Ward somehow turned out to be the baddest of the bunch? That would be tragic. Though, I guess earning the trust of his younger brother or bringing him down from a villainous rampage might put Grant Ward in a position to be redeemed.

Yeah, I went there. What if he is, though? The title of the episode, "The Things We Bury," seems like it is referring to memories. Which is something we need to uncover, considering the conflicting story the audience is getting from these unreliable narrators. However, what if they buried Thomas as well? What if Thomas took his own life out of fear? Again, this could put Grant down the redemption path. But do we really want that, if this is the price?