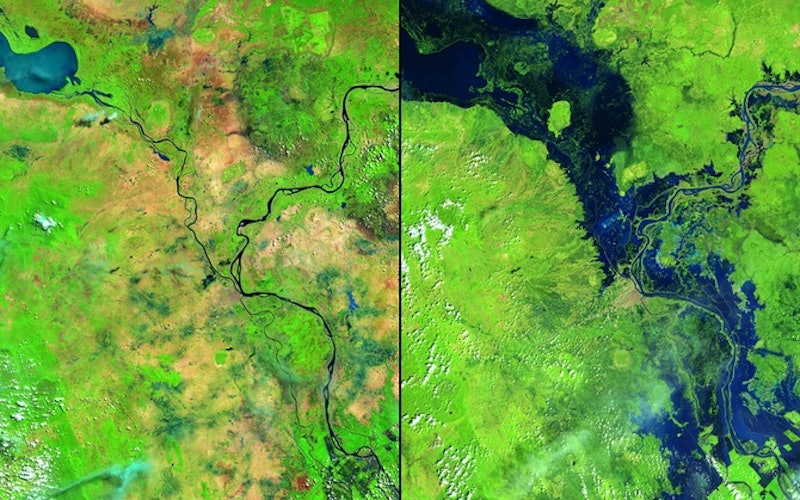 The international summit on climate change, COP21, is currently being held in Paris, where world leaders have gathered to discuss how to combat global warming. On Tuesday, President Obama spoke to the conference, pledging to reduce U.S. emissions by up to 28 percent by 2025 and urging countries to make their own resolutions legally binding in their nations. "Although the targets themselves may not have the force of treaties, the process, the procedures that ensure transparency and periodic reviews, that needs to be legally binding, and that's going to be critical," he said. There are so many images that prove climate change is real, and Obama's renewed push for action could help curb its devastating effects.

Despite what the GOP seems to think, the effects of climate change are very real, and very visible all over the globe in various forms. The symptoms of this ecological disease are numerous and sometimes mistakable — slow coastal erosion, devastating hurricanes, droughts, and floods. But the consequences of climate change have been well-documented throughout the years, and the evidence overwhelmingly shows that the global ecosystem is changing more rapidly than ever before. These before-and-after pictures leave little doubt about the dire circumstances that human activity has created for the planet.

The Lyell Glacier is the second-largest in the Sierra Nevada mountain range, but it's shrunk by nearly 80 percent in the last 150 years.

The coastal erosion of the New Jersey shore after Hurricane Sandy was unprecedented. The beaches still haven't returned to their pre-hurricane levels.

Although some of the glacier's shrinking can be attributed to volcanic activity underneath, the climbing temperatures have caused melting since the 1990s.

Situated on the border between Kazakhstan and Uzbekistan, the Aral Sea was once the fourth-largest lake in the world. Now, it has almost completely dried up, and the loss of the body of water is causing colder winters and hotter summers.

Heavy rains in October 2013 destroyed nearly a million acres of land and displaced over 100,000 people.

A 700-square-kilometer of ice broke off from the main Pine Island Glacier from Nov. 9 to Nov. 11 in 2013. This chunk of ice was the biggest to break off, but it wasn't the first — such events have been happening about every five years.

This saltwater lake has supported human settlements since the Stone Age, and more than six million people rely on it to live. Dam construction, low rainfall, and diversion of surface water have all contributed to its shrinking in recent years.

On The Flip Side: Air Pollution Reduction, United States

The United States has drastically reduced air pollution in the past decade, thanks to regulations, technological improvements, and economic changes. This picture proves that it's not too late to save the planet. Governments, corporations, and individuals can make the necessary changes to reverse the damage to the environment.