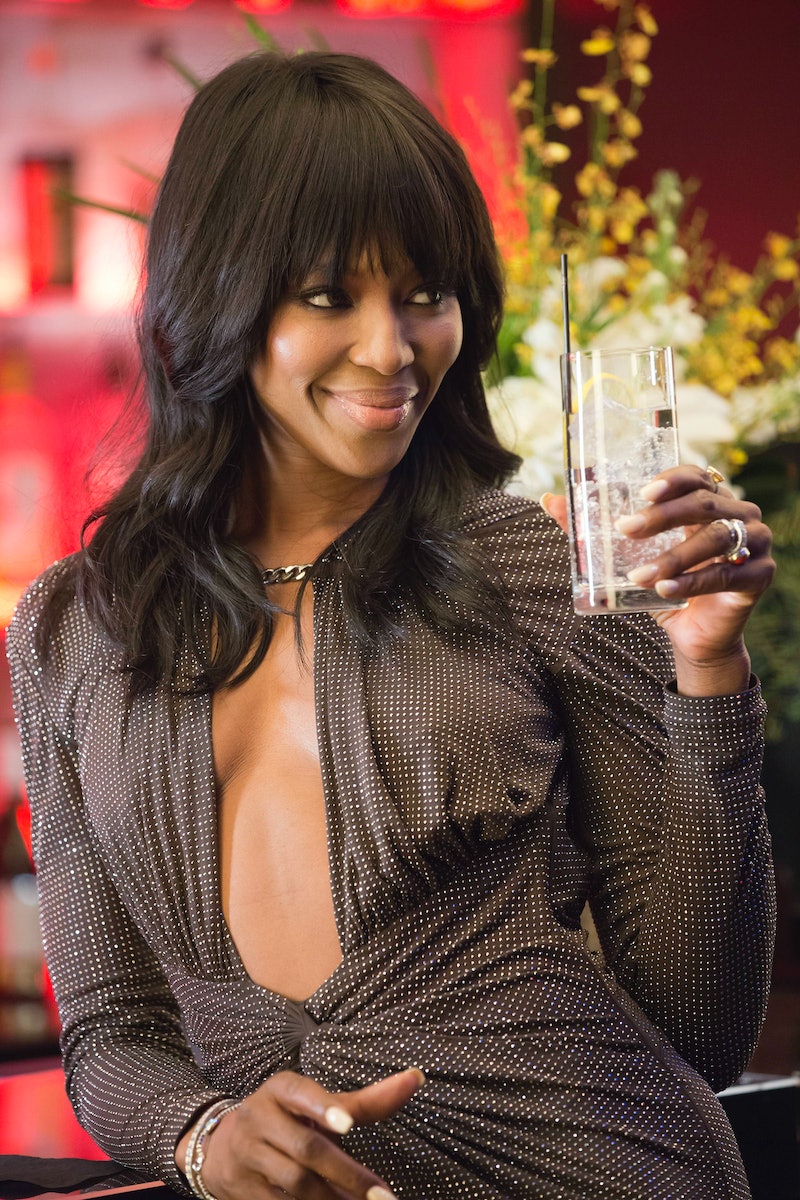 The Empire Season 2 fall finale promises to end the first half of the hit show's sophomore run with a bang. According to the promos for Wednesday night's episode, fashion designer Camilla Mark (played by Naomi Campbell) is back with a vengeance. Now that Camilla returns to Empire on Wednesday night, what can we expect from Hakeem's ex-lover? Will she make his current love triangle between Laura and Anika into a love square? Will Camilla once again bump heads with Cookie? Whatever happened to that big fat check Lucious wrote her to stay away from his youngest son? There are so many questions to explore in this single episode.

Campbell appeared as Camilla during Empire's first season earlier this year, but then took a break while she appeared as fashion editor Claudia on FX's American Horror Story: Hotel. But a lot has changed since Hakeem called Camilla his "bae" during Season 1 — Hakeem's now in love with Laura at Lyon Dynasty, Anika is pregnant and plotting some kind of bonkers scheme, and Lucious is still, well, so Lucious. The last time viewers saw Camilla, she took a bribe from Lucious to stay away from Hakeem. Could Lucious be the one bringing her back — just to mess with his son?

The possibilities are endless, but here's what I think we can expect from Camilla Mark's big Empire return.

Lucious Will Either Pay Her To Leave Or Stay

Like I said above, perhaps Lucious is bringing Camilla back — with another check — to mess with Hakeem. It seems to be his M.O. lately with his estranged son and we all know those two aren't exactly on good terms right now. It makes sense that Lucious would try to play all the cards he could to get to his once-favorite son.

Hakeem Is Going To Be So Confused

The youngest Lyon has so many ladies, so little time, it seems. He's been seeing Laura, who he recently confessed to having genuine feelings for, but he doesn't know he impregnated Anika. Add the dominating Camilla into the mix and what's Hakeem to do?

Anika Is Going To Be Super Pissed

Boo Boo Kitty hasn't taken well to being dumped by Hakeem for Laura, so I doubt she'll be fine and dandy about Hakeem's other love Camilla returning to the fold.

Camilla Will Go Head-To-Head With Cookie (Maybe Candace, Too)

Camilla and Cookie didn't get along the last time they crossed paths and I doubt they'll get along any better in Season 2. And if Candace (Vivica A. Fox) is still around, I bet Cookie's sister will get in on the action, too.

This time, perhaps Camilla is more interested in Lucious or another character. Or maybe she's looking to do business with Empire, and romance has nothing to do with it.

Camilla Could Want In On Lyon Dynasty

The emerging label is getting some buzz, so Camilla may want in on the ground floor of Cookie's new enterprise. Whether or not Cookie lets her join is another story.

No matter what brings her into the Empire fold, I'm sure Camilla's return will come with plenty of drama.

More like this
An Ultimate Guide To The Music Of 'Rap Sh!t'
By Brad Witter
How Lady Gaga & Adele Are Closer To The EGOT All Of A Sudden
By Jake Viswanath
Woodstock Co-Founder Michael Lang Faced Several Lawsuits After The 1999 Festival
By Brad Witter
Kathy Hilton Tried To Explain Why She Misidentified Lizzo As Precious On Live TV
By Jake Viswanath
Get Even More From Bustle — Sign Up For The Newsletter