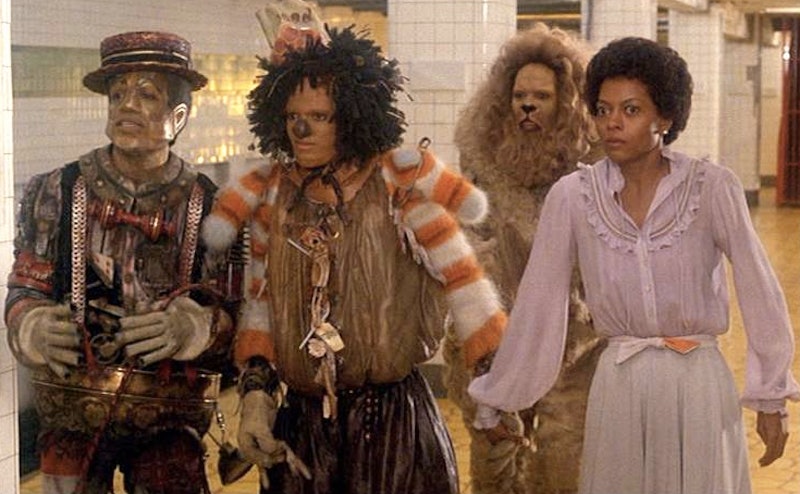 It’s that time again, as the three-year tradition of live-tweeting NBC’s live musicals continues. This year, NBC is airing The Wiz Live! on Dec. 3., and though the musical was originally a Broadway play, it was also adapted into a movie in 1978, which was loaded with famous singers and actors. Looking back at The Wiz movie's cast, it's clear that the stars of NBC's live event have some serious shoes to fill. I mean, how can you beat Diana Ross and Michael Jackson in the same movie? You really can’t, but the stars of The Wiz Live! can put their own spin on the musical.

If anyone is unfamiliar with The Wiz, you should know before tuning in that it is a re-telling of The Wizard of Oz, but with many differences. In fact, the stage and movie versions of The Wiz are pretty different from each other. For example, in the movie, Dorothy is having Thanksgiving in her Harlem, New York apartment before she is transported to Oz, while the play keeps the original Wizard of Oz setting of Kansas. The Wiz movie also has Oz look like a fantastical version of New York City as Dorothy travels through it with the Scarecrow, Tin Man, and Cowardly Lion, searching for The Wiz. Another thing you might want to take note going into the musical, in both The Wiz play and movie, Dorothy’s famous slippers are silver, rather than The Wizard of Oz's ruby red. Of course, one thing that changes in every iteration is the cast, so before The Wiz Live! introduces its performers, let's look back at the stars who put their spin on these beloved characters in 1978's The Wiz.

The amazing Diana Ross played the leading lady in The Wiz. Everyone should know who Diana Ross is, but in case you’ve forgotten, she’s a super famous singer and a former member of the Supremes. They sang hits like “Baby Love,” “Stop! In the Name of Love” and “You Can’t Hurry Love.” She was named “Female Entertainer of the Century” by Billboard and she’s pretty much one of the most successful singers in the world, so needless to say, she was an excellent Dorothy.

Michael Jackson As The Scarecrow

The “King of Pop” played Scarecrow in The Wiz movie, but this version is not like the from The Wizard of Oz. In The Wiz, Scarecrow is made of garbage. Regardless, Elijah Kelly, who’s taking on the role in The Wiz Live!, has some serious moon-walking shoes to fill.

Nipsey Russell As The Tin Man

Russell was a well-known comedian in the '60s and '70s. He gained fame through game shows like Missing Links, Pyramid, What’s My Line and later in 90s, Hollywood Squares. Russell died of cancer in 2005.

Ted Ross As The Cowardly Lion

In addition to playing the Cowardly Lion in the movie version of The Wiz, Ross reprised his role in the Broadway show. He also appeared in movies like Arthur, Police Academy, Ragtime, and Amityville II: The Possession.

Richard Pryor As The Wiz

Often considered one of the best stand-up comedians of all time, Pryor played The Wiz himself in the 1978 movie. He also appeared regularly on The Ed Sullivan Show and The Tonight Show with Johnny Carson. Pryor passed away in 2005.

King played Evillene, also known as the Wicked Witch of the West, but is most famous for playing Mabel Thomas on What’s Happening. After her role in The Wiz, she landed a spot in The Jerk, playing the mother of Steve Martin's character. She was also in Scrooged with Bill Murray.

Every single person in their 20s should know Theresa Merritt. Her name might not ring a bell immediately, but she played Juanita in Billy Madison and Mrs. Vaughan in Home Fries. In the '70s, she played Eloise “Mama” Curtis in That’s My Mama. Merritt passed away in 1998.

While Lena Horne was known for her singing skills, she is also widely remembered for being a civil rights activist. As detailed in the NAACP's obituary of the star, she took part in the March on Washington and refused to sing for segregated, and was honored with the organization's Spingarn Medal for African American Achievement. The Wiz was the last time Horne appeared in a film, but she continued her music career, eventually passing away in 2010.

After Thursday night, the stars of The Wiz Live! will be joining a very talented club of performers who have been lucky enough to be part of The Wiz.