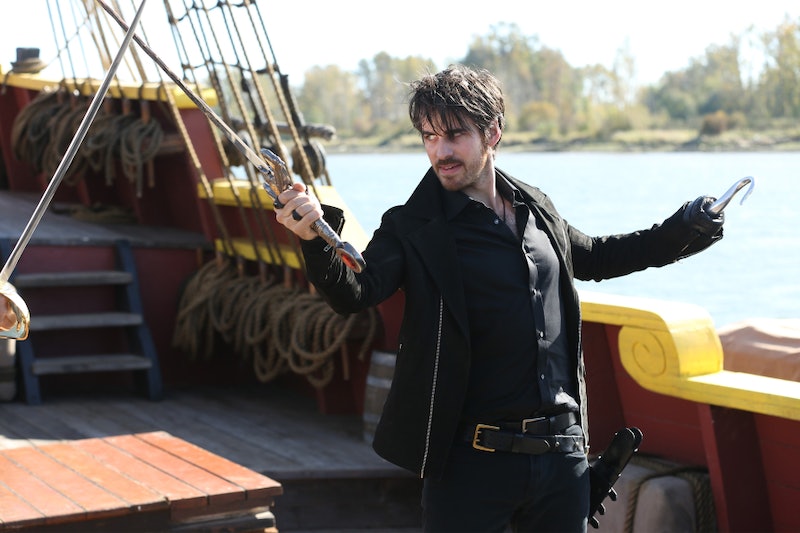 You know how people say that faith means seeing that something is pretty much impossible but choosing to believe in it anyway? I feel like that's what's been going on with Once Upon A Time lately. The show that stole my heart with its depiction of strong women and family dynamics has pretty much sent itself to another realm altogether, this one being all about Hook and how there's nothing more important than forcing a dysfunctional relationship, even if it means forsaking yourself and your family to keep it going. In other words, this whole "Hook is a second Dark One and boy, is he a baddie" is not going over well with me (and many other people), and the fact that we're spending so much time on it when this was meant to be Emma's arc is testing my faith in the show in ways I never thought possible. Things seem to be only getting worse, too, since Hook is determined to open up a portal to the Underworld and effectively send Rumpelstiltskin to hell.

"But wait," you're asking me, "Doesn't that mean everyone else will end up there, too?" Yeah, but so what! Hook's desire for revenge is way more important than pretty much anything else in the entire show! Ever since Rumple took Killian's hand a few centuries ago and killed Milah, he's been wanting to take down "The Crocodile," and now that Zelena's spilled the beans that he's got power beyond compare that he strangely had no idea he possessed, now's his chance. Instead of thanking Rumple for the sweet nickname and, you know, growing as a human being and getting over it, instead Hook's going to bring back all the former Dark Ones and then send Storybrooke straight to hell. Yay!

As Colin O'Donoghue explained to Entertainment Tonight, "We've sort of teased in the teasers for the next episode that Hook, like all Dark Ones, wants to bring the Dark Ones back and use people to open the portal back to hell, and that's what the darkness does. In doing so, that essentially would allow him to get his revenge on Rumpelstiltskin because he would be one of the people who would be sent to hell, or to the underworld. That's his overriding goal. Hook understands that the darkness is using him, but as long as he gets what he wants, then he's happy to do that."

In other words, Emma can resist the darkness in order to also keep the people she loves, but Hook's not even bothered with trying to do that. Instead, he gave into it the second he found out what Emma did, no questions ask, and now he's on the warpath — or, more accurately, the path to hell. Thankfully, that path is paved with amazing guest appearances from old favorites like Cora Mills and Peter Pan, among others, so it's not all bad news, just... mostly. Hook as the Dark One may have seemed like a clever plot twist, but they've sorta written themselves into a corner here because there's literally nothing left to do with him but leave him in hell.

Without a doubt, the rest of our heroes will find their way out of the Underworld and back to Storybrooke, though it'll be a lengthy (or at least multi-episode) process to make it happen. Of course, that still doesn't solve the problem of getting the darkness out of Emma — but maybe that's not a problem anymore, after all. Sure, she's made a few dumb and selfish decisions, but Savior Emma did that plenty, so it has nothing to do with her Dark One identity. If anything, her light magic has likely helped her balance the darkness, and her ability to fight it so effectively is pretty impressive. Now, if only she could get some more screen time away from Hook to really explore that...