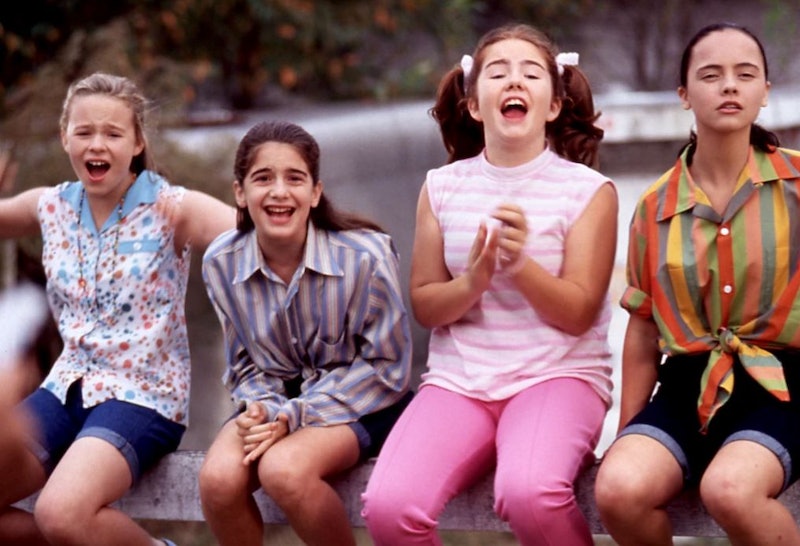 I realize that “squad” as a term for your group of best pals wasn't really a thing in the '90s — but even so, the decade was full of '90s girl squads I definitely wanted to be a part of. True, you don't necessarily need a “squad” for your friendships and other relationships to be fulfilling; at the same time, though, it's tough to deny the draw of belonging to something like the Baby-Sitter's Club. It's nice to have not only a Mary Anne Spier to your Kristy Thomas, but also a Claudia Kishi, a Jessi Ramsey, a Stacey McGill, and all the rest, too.

Embarrassing confession: When I was growing up in the '90s, I was one of those girls who was all, “I can't be friends with other girls.” To be fair, part of it may have been logistical; my older brother's friends all had younger brothers who were my age, so a disproportionate amount of my get-togethers and “play dates” as a kid were dual hangout sessions featuring both the Big Kids and the Next Generation. But another part of my whole “I can't be friends with other girls” schtick — a large part of it, in fact — was my own fault. Because some of the girls I encountered as a young 'un were catty and superficial, I made the erroneous assumption that all girls were catty and superficial.

This is obviously not the case, and as I grew older and somewhat wiser, I dropped my judgment and my own sexism (which, though unintentional, was still harmful) and opened myself up. As a result, I went on to forge powerful friendships with some amazing women — the kinds of women who, I think, are ultimately all these '90s girl squad people and characters, all grown up.

Here's to friendship. There's nothing else quite like it.

1. Samantha, Roberta, Chrissy, and Teeny, Now and Then

I was about 10 years old when Now and Then was released in cinemas, and although I didn't see it until it hit VHS a little later on, it immediately became one of my favorite movies. Even though it took place in 1970, it was still infinitely relateable — and now that I'm roughly the same age as the adult versions of all these characters, it's even more relateable. It's exactly what it's like when you get together with your best friends for the first time after not seeing them for ages. You've always got each other's backs, no matter how much time has passed.

Cher and Dionne may be kind of spoiled, and I'm still not sure how I feel about their attempt to mold Tai into someone other than herself (all of which are things I also feel about the novel Emma), but all of them have their hearts in the right places. They're also definitely the most stylish squad around.

Heck, these two are still a girl squad I wish I had. Back when they made their professional debuts — Venus in 1994 and Serena in 1995 — they were frequently mentioned in the same breath, and always a powerhouse pair of players. Remarked upon just as often, though, was they way they always supported each other, even when they were playing as opponents. The sisters have maintained this quality throughout the decades since, teaching us that it's possible — more than possible — to be competitive and supportive at the same time.

A bright, diverse group of girls with excellent business sense who have their spats, but always work it out in the end? Yes, please. While many girls in the '90s played Spice Girls, my friends and I played Baby-Sitters Club; the best part was that there was a character for each of us, and they were all awesome.

Not to knock the Spice Girls, though, because… well...

I'll be honest: I wasn't really a Spice Girls fan. In retrospect, though, I can recognize that they were actually rather important for the '90s girlhood landscape; we may not have known it at the time, but they laid the groundwork for many a budding feminist.

Daria and Jane are pretty much the model of a good friendship, as far as I'm concerned. Like all of the other pairs and groups on this list, they've always got each other's backs; I think, though, that what they demonstrate the most strongly is the fact that they are keenly aware of each other's flaws, and yet they've still always got each other's backs. As Anita Gates wrote in the New York Times in 1999, when Daria was in its third season, “the absolute proof that Jane is a good friend is that she knows how Daria feels about [Jane's brother] Trend and will never, ever tell.”

Part Odd Couple and part The Parent Trap, Sister, Sister reminded us that you can be both totally different from someone and absolutely the same — even though it sounds kind of counter-intuitive. Our differences are often our strengths; sometimes, they're even what remind us how alike we are. And I'm not just talking about the whole identical twins thing.

8. Angela and Rayanne, My So-Called Life

I actually missed the My So-Called Life train when it originally aired (although these days, I really have no excuse — that's what the Internet is for, after all). That said, though, I have since absorbed much about the importance of the show, which is particularly impressive when you consider the fact that it only ran for 19 episodes. Angela and Rayanne (and really the entire cast) navigated issues frequently reserved on most shows for “very special episodes” pretty much on a daily basis, figuring out the whole “growing up” thing together. They were the kind of friends you really hoped you'd have yourself — and the kind of friend you really hoped you'd be, too.

There was a Sailor Scout for everyone, and they functioned as a literal power squad. Heck. And yes.

OK, so technically this isn't a girl squad — it's just a regular squad — but for kids obsessed with freaky stuff like yours truly, having your own Midnight Society was the epitome of #squadgoals. If, y'know, #squadgoals had existed back then.