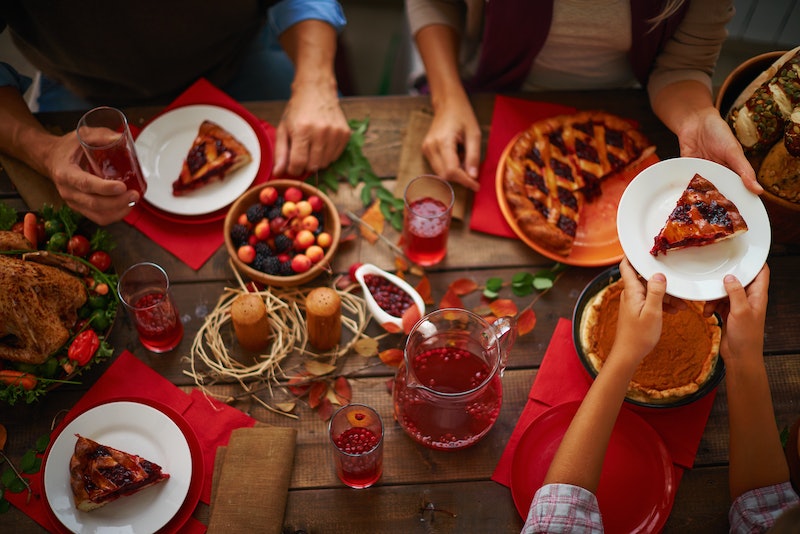 Real talk: the best part of the winter holidays is the never-ending supply of delicious food that isn't available during the rest of the year. In the midst of all the celebrations and social interactions, though, it can be really easy for some of us to overeat to a point of discomfort. While that's OK to sometimes overindulge, the possibility of overeating in so many settings can be a point of anxiety for people like me who struggle with binge eating disorder (BED).

But this concern isn't only present in folks with BED. Most of us worry about the overindulging that accompanies holiday cheer, mainly because we constantly hear in the media about the dangers of gaining a pound or two every Christmas. One way to cope with this apprehension is to redefine the way we think about holiday eating. Instead of focusing on calorie-counting and dieting, emphasize treating yourself and consciously enjoying every second of it. So what if you gain a pound?! As long as you still feel like you're in control of your body and your decisions, that's what matters.

These little tips don't only apply to those of us who wrestle with BED; they are applicable to anybody who is looking for a way to maintain a healthy relationship with food and still get the most of the holiday fare. Because whoever you are, you deserve to get down and dirty with those red velvet cupcakes.

1. Find Some Friends You Can Talk To About Your Relationship With Food

One of the hardest parts about eating disorders in general, including BED, is the fact that they're often a secret. A crucial part of coping with any eating disorder is surrounding yourself with folks who understand what you're going through and are there to listen if you need a pair of ears. You'll definitely need this support during the holidays, especially in those moments when you feel totally overwhelmed and concerned about losing control.

As hard as it is to believe sometimes, there are always people around who are willing to listen to you; tell them how hard it is to be around food all the time. Be honest and let it all out. Keeping those emotions hidden will only make you feel worse in the long run.

Allow yourself to enjoy every mouthful of whatever it is you choose to eat (because, don't forget, there is no such thing as forbidden food). Binge eating always happens when you lose the sense of what textures and flavors you're encountering, when you're just chewing and your mind is off in the clouds, or is already punishing you. If you pay attention to the delicious stuff you're munching on, you can listen better to the signals your body is trying to tell you. You'll love every second of it, and you'll know when it's time to put your fork down.

Mindful eating is commonly used in the BED recovery process, and it can be a very practical tool when you're trying to avoid the stress and anxiety that sometimes accompany holiday cheer. Chew slowly and check in with yourself about whether you're still hungry; the more you learn to truly enjoy those homemade gingerbread cookies, the less likely you are to eat an entire batch of them.

3. Don't Drink Too Much At Social Gatherings

A boatload of booze never exactly paves the way for fantastic decision making, whether it be with your exes or those late-night noshes. There's nothing wrong with enjoying a couple cocktails with your friends on a wintery night out, but keep an eye on the overall alcohol intake, especially if you're at a party and you're surrounded by sugary goodies. Staying relatively sober will keep you clear-headed and steadfast, ensuring that you don't go overboard on the snacking.

Deprivation is not the name of the game, my friends! You might think you're doing yourself a favor by refusing a piece of cake at your friend's dinner party, because you don't want to eat too much sugar this week, right? But you're only ignoring that vociferous sweet tooth and increasing the likelihood of crushing a whole packet of cookies when you arrive home.

It's the happiest time of the year — nobody should torture themselves by denying their bellies of tasty desserts. If you really feel like having some, have some, but only some. That's the only way your cravings — and you — will be satisfied.

5. Listen To Your Belly

You see an ungodly amount of buffet style dinners during the holiday season, each one of them more decadent than the next. Everyone walks around, filling up their plates to their heart's desire, and paying much more attention to the titillating conversation than what's going into their bellies.

If you know you're someone who struggles with bingeing, be careful in settings like this. Pay no attention to what others have got on their dish, and stick to what you know your body needs. And before you go back for that third serving of sausage stuffing, ask your belly if you're actually hungry.

6. Don't Feel Guilty For Saying No

Being around aunts and grandmas who insist that you're malnourished, I wouldn't be surprised if you're constantly having extra food shoved on your plate. Have some more mashed potatoes! Another piece of pie! As fun as it is to be showered with that kind of love, it usually ends with a stomachache.

Don't be afraid to say no when someone you adore is offering you more food. They won't be offended in the long run, and they definitely won't disown you for your honesty. Remember the most important thing in every circumstance is to treat your body well, and if your stomach is saying it's full, give it time to digest before you munch on anything else.

7. Eat Breakfast — No Matter What

I have this bad habit of skipping out on breakfast the morning after a big holiday shindig. I'm just so ridden with guilt for guzzling down eggnog and nibbling on cream puffs all night that I convince myself that I don't need to make my routine oatmeal at daybreak. Well, this mistake just sets me up to binge again later on that night.

Eating a well-rounded, protein-rich meal in the morning will provide you with the kind of satiety that lasts throughout the day, boosting your levels of serotonin and subsequently curbing those dangerous cravings that lead to overeating.

Cindy Moore, director of nutrition therapy at Ohio's Cleveland Clinic Foundation, told Women's Health that even if you indulge a little bit on breakfast (like, finish it off with some chocolate), it's a good thing. It prevents you from hitting a big hunger slump and chowing down on those Santa-shaped cookies at the office in the afternoon.

8. Keep Up Your Exercise Regimen

I don't encourage working out during the holiday season so that you can fit into a skimpy red dress. No, no. Exercise for the vast array of other, non-weight-related benefits: to cure yourself of a positively crappy mood, to get your heart rate going and your blood pumping, and to boost your energy levels.

Each one of these has a real fighting chance at keeping you out of the binge zone. For example, after a sweaty spin class, you feel much better about yourself, which means you're more likely to make smart choices about what you're eating for dinner.

At the end of the day, take care of yourself. That's the first step to finding a happy balance and keeping a healthy body — all the while still indulging in the yummy stuff, of course.