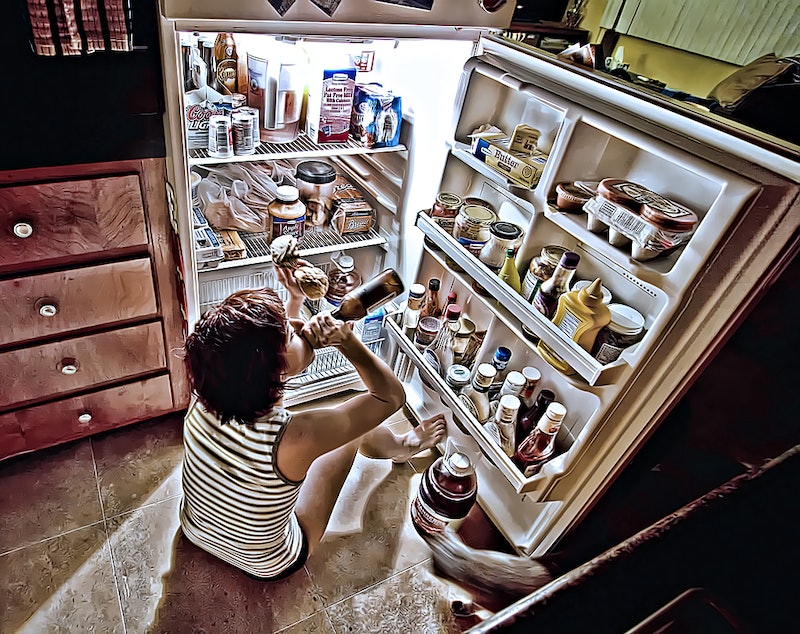 You might think binge eating is just a thing college-aged stoners or recently dumped people do, but in many cases, regular binge eating is actually an eating disorder that needs to be treated. In fact, in 2010, the American Psychiatric Association (APA) released a new version of the Diagnostic and Statistical Manual of Eating Disorders, officially listing binge eating disorder (BED) as a mental illness. To be clear here: we’re not talking just occasional Sunday sessions of overeating at brunch or late night snacking (let’s face it, we all need those from time to time). In its clinically diagnosed form, binge eating is a secret demon that can feel unbeatable.

Anorexia and bulimia nervosa have been at the forefront of discussions about eating disorders for a long time. Lately, though, we are hearing more about how destructive bingeing can be, both physically and mentally. Brave souls are sharing their stories about disordered eating, and recent research is being made available to the general public, meaning it's more likely than ever for everyday people like me to seek help.

For years, I thought I was a freak who just liked food more than everyone around me. I spent far too many lonely nights locked in a dark bedroom eating enough McDonalds to feed four people, only to show my normal, smiling face at work the next day. Simply knowing there are people out there who fight similar battles was the first step to recognizing my own illness. As we continue to educate ourselves and bear witness to each other’s narratives, here are some important things about binge eating disorder (BED) we should all be familiar with.

I kept my bingeing under wraps for ages by making sure I never got bigger than a size 4 and maintaining a regular fitness regimen. Similarly, yo-yo eating, dieting fads, and even the occasional fast or two can be used in between regular sessions of bingeing to stave off noticeable weight gain, making BED outwardly invisible in many cases.

When the APA released revisions of the DSM in 2010, it stated that numerous doctors had been incorrectly using weight loss regimes to treat patients grappling with bingeing. Because many people who suffer from BED are not obese, simply addressing the number on the scale ignores the psychological issues that are at play. Most of those who undergo treatments specifically geared to losing weight find themselves grappling with bingeing once again shortly after.

It’s easy to identify images of women who are far too skinny and recognize signs of anorexia — we have been instructed on what that looks like. However, an individual struggling with binge eating could appear entirely “normal,” successfully hiding his/her illness.

The last time you heard the term “binge” it was most likely followed by talk of puking. Yes, the connection between bingeing (by the way, that is the proper way to spell it; not “binging”) and purging are real symptoms of bulimia nervosa, but the latter doesn’t always follow the former. Due to the automatic link we make between the two, we then wrongly assume that those who overeat but don’t purge only have one problem — they simply need to learn when to put their fork down.

“Food addiction” is a factor that appears strongly in BED (but not in bulimia) and doctors are considering addiction recovery treatments to address it. What makes this particular addiction extremely difficult to care for, unlike alcohol or drug dependency, is that food consumption is necessary for survival. Complete abstinence is not an option, so the programs used to heal BED need to be constructed differently.

Extra slices of cake, a few bags of Cape Cod salt and vinegar chips, Chinese takeout — it all gets consumed behind closed doors, usually after a particularly stressful day. Overeating in isolation is constructed in the mind as a reward, a guilty pleasure in the likes of watching Keeping Up With the Kardashians marathons. Plus, the hangover after an all-nighter nosh is imperceptible to the human eye. There is no faint smell of alcohol or milky red eyes to blow your cover. Maybe there is a faint stomachache, but none of the aftermath is visible on the body.

Even scarier is the fact that a person afflicted by BED could appear to be the healthiest person at your office. She might always say no to sugar and pack a healthy lunch. Secrecy is the foundation of BED, and I know I used to spend a lot of time and energy hiding my unhealthy relationship with food.

There is much shame and guilt involved with bingeing, leaving little room for candid discussion, which leads me to…

4. The Stigma Can Be Crippling

Eating large amounts of food isn’t exactly considered sexy in today’s society (when was the last time you saw platinum January Jones chow down on cheesy enchiladas?), making it almost impossible for women to come forward and admit their struggles publicly. We’ll talk about binge drinking and binge shopping, two closely related disorders that are triggered in the same part of the brain, because they aren’t nearly as “disgusting.” The first person I tried to confess my bingeing to looked at me with such revulsion it brought me to tears. I thought, "Am I really that gross?"

When the FDA recently approved the ADHD drug Vyvanse to be used for patients with BED, it sparked vibrant conversation about our society’s view on this disease. L.V. Anderson of Slate wrote a personal response, reminding us that many still don’t truly believe BED to be a legitimate eating disorder. For the first time, we are witnessing honest, informative dialogue that will hopefully change the way we think about BED and the people it affects.

5. Mindfullness Is A Key Part Of Treatment

Emotions surge strongly through the body when the urge to binge appears, and when they aren’t harnessed they take over and, bam, the tubs of ice cream in the freezer are empty. It is proven that mindfulness techniques help ease the stressful mental states that accompany anxiety and depression, both of which are strongly linked to BED. Being fully aware of our emotions leads to more conscious choices in how and what we eat. Like all forms of therapy, mindful meditation is not a cure for eating disorders, but it is certainly a good place to start.

As a yoga teacher, I've seen mindfulness bring an overall improvement to people's lives, encouraging us to be more present and connected. And using daily meditation has helped me get in touch with how I truly feel when I briefly consider eating an extra large pizza (or two). The happier we are and the more we are at peace, the more likely we are going to find healing from mental illnesses. It’s no secret that our culture sends us daily messages on how women should look and eat — but the best way to wade through all the advertisements is to reach a healthy, honest place with yourself.