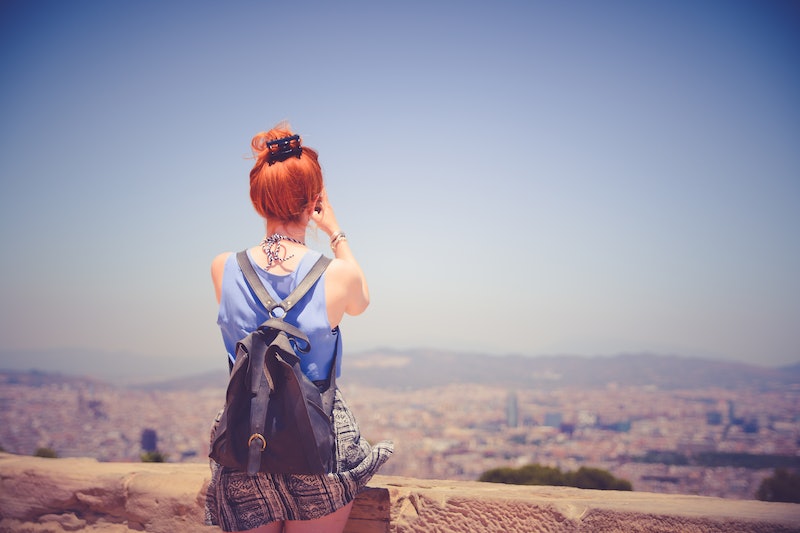 When Michelle Poler was picking her final project for her graduate program, she decided to go with something not many people would be brave enough to take on: Facing one fear every day for 100 days. Now Poler's "100 Days Without Fear" project has finished, and inspired thousands of people along the way. Plus, facing so many fears in such a short time has taught her a lot — and there are loads of lessons we can all learn from her final fear, too: Giving a TED talk in Houston.

Not only was speaking at the TED Talk in Houston one of Poler's fears, but just getting in required her to get out of her comfort zone, too. As she explained in her post for Nov. 30, when she reached out hoping to speak about her experiences at the event, the organizers of the initially told her that they were only looking for speakers with a connection to Houston, which she didn't have. She wrote:

At that moment I felt defeated, but I had two options: a.- thanking him for replying back and settle with his answer or b.- keep pushing. I asked myself: what's the worst that could happen and went with “b”. I wrote a huge email listing all the reasons why they should accept me to speak at their event; I went all out. A week later I received an invitation to speak at TEDxHouston 2015. For the first time in my life I experienced what happy tears feel like. I was crying not only because my project had made it to TEDx, but also because I followed my heart and didn't take "no" as an answer. This showed me the importance of believing in ourselves and to fight for what we want.

Fear is a necessary part of everyone's life, and that's not inherently a bad thing — after all, without fear, we wouldn't know not to walk into traffic or jump off a cliff. But overcoming fears of smaller fears, the kinds of fears that hold us back, is also something we all need to learn to do, too. So here are five lessons we can all take away from Michelle Poler's TED Talk and her journey.

Poler explains that as she worked through her project, she realized she wasn't really facing 100 fears — she was facing the same big fears over and over again as they manifested around smaller things. For example, she wasn't afraid of karaoke, but she was really afraid of embarrassment. And that's an important thing to realize.

2. Blaming The Past Doesn't Fix The Future

We are afraid of things for all kinds of reasons, from bad experiences to it just being the way we were raised. But understanding why you're afraid of something won't make you get over it. For that, you need to face your fears.

3. Identifying Your Fears Is The First Step To Conquering Them

There's a whole process involved in conquering fear, but it all starts when you admit to yourself that you really are afraid.

4. Facing Your Fears Is Much Less Scary Than Thinking About Them

Of all the challenges Poler gave herself, she says that there wasn't a single challenge in which she was more afraid during the challenge than she was leading up to it. Actually doing the scary thing often isn't as bad as thinking about doing it.

Fear is healthy, and Poler says that her goal isn't to be fearless. But letting fear rule you isn't good either.

For more insight into that, you can and should check out her full TED Talk below.