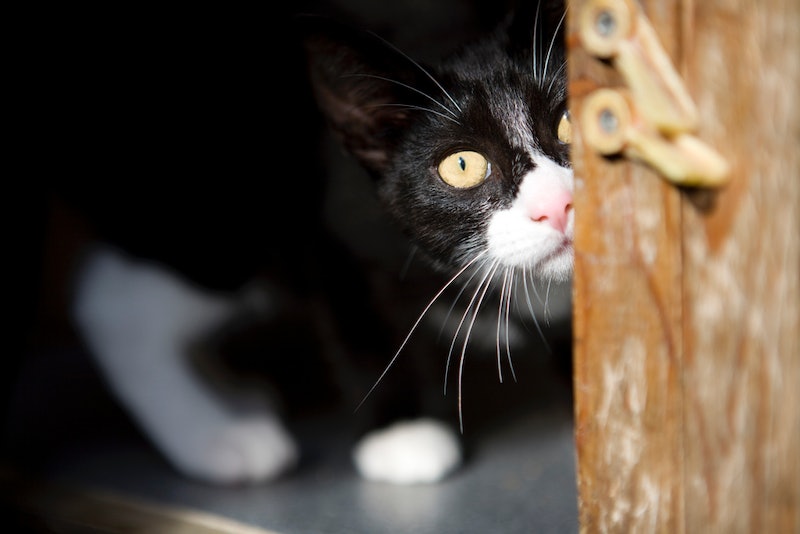 In the wake of the great cat vs. cucumber viral trend of 2015, we've all learned something new about cats — like, for starters, you shouldn't be scaring the wits out of your feline friends with vegetables. But it's also become increasingly more evident that there are many things cats are irrationally afraid of (including cukes). And, well, the term "scaredy cat" is beginning to make a lot more sense.

Some cats startle so easily, in fact, it seems certain there must be a plausible scientific reason. Perhaps their fight-or-flight response is heightened due to the abundance of larger predators and dangers in the world around them. Perhaps it is some form of feline myoclonus, like "sleep starts" (but, you know, awake). Lacking any apparent concrete scientific reasoning, we're largely left to draw our own conclusions.

However, there are some things cats universally seem to harbor irrational fears of, which makes you think there could be something more to this phenomenon than just being "chicken." Here are but a few things these crazy, albeit incredibly cute and cuddly, creatures are often all too terrified of.

The jury's still out on this one. Although it's apparently a widespread phenomenon, globophobia among felines has yet to be linked to any scientific explanation (that I could find). Although, to be fair, popping balloons really freaks me out, too.

When cats are confronted with bananas, shock and confusion ensues. People have devoted entire video compilations to the hilarity of cats reacting to bananas. This can likely be chalked up to the same reasoning offered for cats' seemingly inexplicable fear of cucumbers — the element of surprise and/or the potential predatory threat from something unfamiliar.

I mean, really, what would you do if you woke up to find two green apples on the bed beside you? Obviously, you'd assume the were highly suspicious in nature and proceed to freak out over them, like this adorable kitten. As to the why, let's just lump all fruits and vegetables into the potential threat category, eh? The moral of the story here is don't go ambushing your cat with produce.

This one seems pretty self-explanatory, right? Vacuum cleaners are loud, lumbering beasts. That's precisely the problem, says Veterinarian Pam Johnson-Bennett. "The sound, along with the movement, can be very frightening," she writes on her website. "From a cat's point of view, this monster goes on a rampage around the house, following him from room to room." Really, you can't fault them for that logic — it sounds like the start of Scream 5.

Listen, you'd probably be none too happy if someone came along and drenched your dry-clean only coat. Such is essentially why cats hate water so much. According to Petful, cat fur simply isn't mean to be drenched. Not only does a wet coat weigh your cat down and make them uncomfortable, it also creates an odor. And, like the masters of discerning they are, cats are sensitive to smell.

Before we thoroughly assume domestic cats truly are big ol' scaredy cats, though, we have to remember big cats don't like their reflections either. When Big Cat Rescue held a mirror up to its big cats, most were comically displeased with what they saw.

More like this
25 Galentine's Day Games To Play On Zoom With Your Long-Distance Besties
By Mia Mercado
21 Galentine’s Day Memes To Celebrate Your Best Friends
By Meghan Bassett and Mia Mercado
Everything You Need To Know About The Samsung Galaxy S23 Ultra’s New Camera
By Alexis Morillo
Samsung's New Phones Have Amazing Cameras & Come In 8 New Colors
By Alexis Morillo
Get Even More From Bustle — Sign Up For The Newsletter
From hair trends to relationship advice, our daily newsletter has everything you need to sound like a person who’s on TikTok, even if you aren’t.