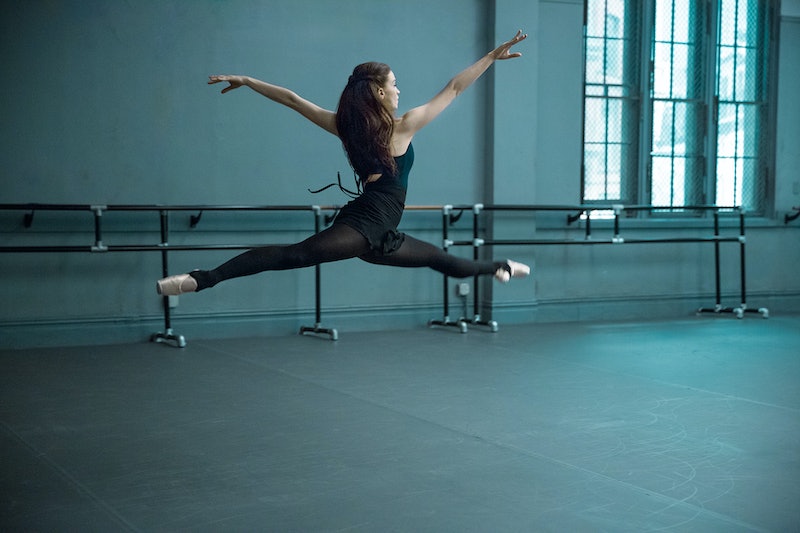 Starz's gritty miniseries Flesh and Bone is officially my newest obsession, because there are so many things to love about it. Since creator Moira Walley-Beckett (a former dancer herself) chose to hire professional ballet dancers rather than actors, the dance sequences are to die for. As the lead actors have attested in interviews, Flesh and Bone is a fairly accurate depiction of the professional ballet world. But in addition to the dancing, there's an equally important and compelling side plot that focuses on Claire's abusive past and her present emotional torment. This isn't the first time a fictional dancer has been portrayed as battling such issues. In the media, ballet and mental illness are frequently depicted hand-in-hand. Although doing so isn't inherently problematic, it's worth exploring how mental illness would affect a ballerina's career, because the reality, which I know firsthand, is different from what we've seen in movies like Black Swan and shows like Flesh and Bone, where disorders almost seem to aid the dancers suffering from them.

First, however, it should be noted that many aspects of Claire's mental illness are almost painfully spot-on in their depiction. Although her diagnosis has not yet been stated outright, she exhibits many hallmark symptoms of PTSD as outlined by the Mayo Clinic — which would be the result of the sexual abuse she endured at the hands of her brother, Bryan, who is still stalking her. Claire is skittish, startles easily, and has moments of disassociation. And, perhaps most hauntingly, she has a bedtime ritual of covering her entire body with books before she goes to sleep — most likely in an effort to feel that her body is safe.

Despite this accurate portrayal of the ballet world and overall impressive depiction of mental illness, Flesh and Bone doesn't quite explain how a ballerina's career would likely be affected by an intense, untreated mental illness. Claire hasn't received professional help, and she has no close friends to lean on for support. For example, shortly after joining the American Ballet Company, she has a disturbing sexual experience with a sleazy donor. Her pained facial expressions and the fact that she's under the influence of drugs make it clear that she's not a willing participant — and he only backs off when she vomits on the bed. The next morning, she's shown huddled on the floor of the shower, visibly stunned and distressed. This is a traumatic experience in itself, and shortly thereafter, Bryan tracks her down and ends up briefly staying at her apartment. During all of this, Claire is shown at the studio dancing so passionately and perfectly that the artistic directors are repeatedly wowed. Although she looks haunted and depressed on the dance floor, she uses the emotions to her advantage every single time and never once loses her concentration. Since losing your focus for even a moment throws off a dance routine, it would have been more realistic to see her occasionally lose her concentration due to a flashback of some sort.

It's possible to take negative emotions and use them to improve yourself as a dancer — like with any artistic endeavor, tapping into emotions can help make a ballerina even more successful. However, an untreated mental illness is decidedly not an asset to a dancer's career and it can be problematic for it to be portrayed as one.

This is especially important to me as a former ballet dancer who has also experienced PTSD and knows how the disorder can permeate every aspect of a person's life. I began dancing shortly after I learned to walk and grew up in the ballet world. Before I traded in my pointe shoes for college textbooks, I spent countless hours each week in the dance studio while I grappled with PTSD and an eating disorder. Despite my intense passion for ballet, my PTSD symptoms did not simply melt away the moment I stepped into the studio or onto the stage. In fact, PTSD is characterized by intrusive thoughts and flashbacks, according to the Mayo Clinic, and those symptoms don't politely take a time-out when the sufferer is engaging in an activity that he or she loves. They may also intensify during times of extreme stress — and to say that Claire's work environment is stressful would be an understatement. Yet, there's never a moment during her dancing when she loses concentration or suffers a flashback.

Emotional torment is not an asset to a ballerina. In Black Swan, the further Nina descends into her illness, the more she improves as a dancer. In the film's final moments, she suffers a full-on psychotic break just moments before taking the stage and giving a performance that even she knows is "perfect."

In Flesh and Bone, Claire delivers her most impressive dances when her suffering is extremely acute. It's entirely possible for an untreated mentally individual to succeed as a dancer, but it seems unlikely that her artistic breakthroughs would occur in conjunction with her darkest moments.

After the release of Black Swan, psychologists weighed in on its message to ABC News. Unsurprisingly, their consensus was that it's "unlikely" Portman's character could have successfully performed Swan Lake in her compromised mental state. "It may be possible for [dancers] to cope to an extent at a pretty high level, but it's not typical," said Dr. Steve Lamberti, professor of psychiatry at University of Rochester Medical Center. While Nina and Claire suffered from different illnesses, I think Lamberti's point can be applied to Claire on some level, since suffering from PTSD and living with the constant threat of her abuser showing up is another compromised mental state.

Professional dancers are typically extremely resilient and determined — so I'm not saying Claire's career would simply fall apart because of these circumstances, just that depicting mental illness as an asset to a dancer is unrealistic. Black Swan and Flesh and Bone both deserve credit for not glamorizing mental illness — but they send an unrealistic message about what it's like to be a professional dancer with a mental disorder.

And, with all these depictions of emotionally tormented dancers, viewers may be wondering if mental illness is rampant in the ballet world. There's no denying that, due to the precise nature of ballet, the practice attracts perfectionists who are often intense and obsessive individuals. Dancers are three times more likely to suffer from eating disorders than the general population, according to a study from the European Eating Disorders Review, and anorexia and bulimia can trigger and intensify depression and anxiety. Jonathan Abramowitz, associate chair of psychology at the University of North Carolina at Chapel Hill, told ABC that OCD and anxiety disorders are common among ballerinas. (However, no exact statistics are available.)

But we also should not ignore the fact that there are plenty of professional ballet dancers who are healthy and well-adjusted individuals. It doesn't make for dramatic television or film, but I'd like to see some media depictions of successful dancers who are emotionally healthy, and take care of themselves both physically and mentally. They definitely exist, and, contrary to what depictions like those found in Flesh and Bone and Black Swan may imply, can be amazing dancers.