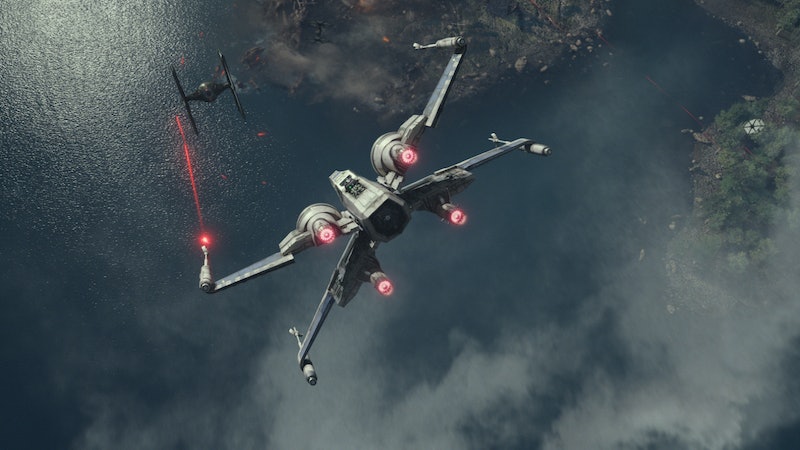 If there's one movie franchise known for making special effects a major part of modern motion pictures, it's Star Wars. The beloved space opera series first gained notoriety with Star Wars (later retitled A New Hope) in 1977, which was unlike anything people had seen before. Now with the seventh Star Wars movie, The Force Awakens , hitting theaters this month, it's a good time to ask how the Star Wars special effects have changed over the years.

When George Lucas was preparing to shoot the first Star Wars film, the effects he envisioned for the movie simply didn't exist yet. So he founded his own special effects company, Industrial Light and Magic, which has gone on to create some of the most impressive special effects in the history of cinema for multiple franchises — not just Star Wars. The first three movies relied on life-like animatronic puppets like Yoda and Jabba the Hut for their creatures, but are best known for introducing digital effects into the mix. Computer-controlled, extremely detailed miniatures and digitally-enhanced space battles raised the bar for what movies could look like by a good margin, and the original trilogy is still revered for its masterful balance of practical and digital effects.

Two decades later, when Lucas began the prequel trilogy with Episode I: The Phantom Menace, digital effects were far more common. But Lucas took them into a place where they had never gone before (and maybe shouldn't have) in both quality and quantity. One of the main critiques people have with the prequel trilogy is that they're over-reliant on CGI effects. For example, in Episode II: Attack of the Clones, not a single suit of Clone Trooper armor was produced for the film — every soldier in the film is computer-generated. In The Phantom Menace, there are only 12 minutes out of the film's 133 minute run-time that don't contain a computer-generated effect. But despite the overuse of digital effects, some of them were remarkable. For as hated as the character of Jar Jar Binks is, he does have the distinction of being the first walking, talking CGI lead character in a film (Casper predates him as a lead, but Casper didn't walk).

So after the introduction of computer effects in the original trilogy, and the gross overuse of them in the prequel trilogy, where does that leave The Force Awakens? The film isn't expected to revolutionize effects in the usual manner by coming up with new computerized innovations, but it may end up staging an unconventional revolution by shifting the focus back to practical effects.

Director J.J. Abrams wanted to use as little CGI as possible, and while the film will have plenty, it's more the type that enhances a film rather than overwhelms it. There are reportedly only two fully-rendered CGI characters in the film (The Phantom Menace had 60), and most of the fully CGI shots are believed to take place in space. But it's the practical effects that have fans excited, and the crowning achievement has got to be the new droid, BB-8. When the rolling droid was seen in the film's first trailer, everyone assumed he was CGI. But it turns out that he was a real robot, one whose mechanics didn't exist when he was first envisioned, leading to the type of innovation that was present in the original trilogy.

Although the technology has come a long way since the 1970s, The Force Awakens is truly trying to capture the charm and innovative spirit of the original Star Wars trilogy, and that's really the best that fans can hope for.