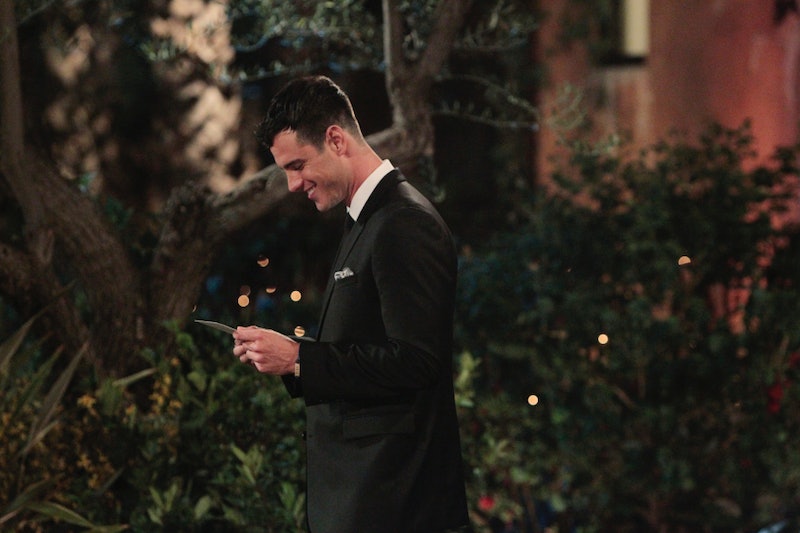 Know that I am green with envy and full of regret when I say it's time to meet the contestants on Ben Higgins' season of The Bachelor . The wait is finally over, and the names are finally out. Not long ago, there was a sweet, kind, beautiful man named Ben Higgins who wanted to fall in love. Even though he didn't get the final rose on The Bachelorette, he was given the opportunity to be the distributor of roses for this winter's Bachelor. So who will Ben be handing out roses to come the first night at the mansion?

This season's cast is a bit different from past seasons. Unlike previous years, this season is mixing it up a bit with familiar faces and two of one face (just go with it). While I'm usually against old Bachelor personalities returning to the show, I like the two women that will be on this season, so I'm willing to overlook the fact that they already got a shot at love with their own Bachelors.

Will Ben find love this time around? We'll have to wait to see how the relationships progress throughout the coming months, but for now let's place our bids on which of the following women has a chance at winning his heart.

Yeah, you know her. Most recently on Bachelor in Paradise Season 2, Amber is back on The Bachelor and hoping to hit it off with Ben. The 30-year-old was originally on Chris' season of Bachelor, but only lasted three episodes. Which was probably for the best, because Chris was a dud. Amber is a bartender in Chicago.

Becca is also a familiar face, being the almost winner on Chris' season of The Bachelor. The 26-year-old was the runner-up to Whitney. Becca currently lives in San Diego as a chiropractic assistant.

Breanne is a 30-year-old nutritional therapist from Seattle. According to Reality Steve, she has been married (and divorced) twice, but hasn't given up on love.

This 23-year-old is currently a news anchor in Virginia, but originally hails from Texas. Chris Harrison told Yahoo that Ben — and others — wonder if Olivia is there for the right reason, or just to get her name out there.

You're not going to forget this face, because there are two of them this season. The 22-year-old and her twin sister are both going to be competing for Ben's heart.

Haley is Emily's twin sister, but good luck telling them apart. According to Reality Steve, she and her sister were both cocktail waitresses in Las Vegas.

Lauren H. is a 25-year-old kindergarten teacher from Michigan.

Lauren Barr (or "LB" according to Us Weekly) is a 23-year-old fashion buyer from Oklahoma.

The other Lauren B. (25-years-old) is currently a flight attendant in Marina Del Rey, California.

Alert everyone you know, because we may have a match made in software sales heaven. Caila is a 23-year-old software sales representative from Ohio, aka the same job Ben has.

Leah is from Denver, Colorado (aka, where Ben is from, so fingers crossed for a quick connection). The 25-year-old is an event planner.

Jennifer is a 25-year-old from Florida, who runs an online clothing store Hot Pink Hanger, so expect to have some major clothes envy this season.

This Texas sweetheart is 24-years-old and has started up her own real estate company. According to Chris Harrison's interview with Yahoo, she has recently gone through a breakup and has had a hard time letting go.

Amanda is a 25-year-old esthetician from Rancho Santa Margarita, California. She has two daughters, one is three and the other is one-year-old.

Jubilee is a 24-year-old war veteran from Florida. According to Harrison, Jubilee is a "strong, bold, loyal" woman, who was born in Haiti, adopted by an American family, and served for the country.

Rachel is 23-years-old and from Little Rock. She currently unemployed, according to Us Weekly.

Cool name, Lace. This 25-year-old is this season's second contestant from Denver — potentially stacking the deck in Ben's favor for an easy post-show relationship. Lace is a real estate agent in the Mile High City.

Fourth Lauren this season! Come on, ABC, you couldn't have planned that better? This Lauren is from Houston and is a 26-year-old math teacher.

Isabel is a 23-year-old graphic designer from Connecticut.

You don't have to be friends with your exes, but that doesn't mean you can't date a friend of your ex, I guess. Jami, 23-years-old, is friends with Kaitlyn Bristowe, aka the one that got away (probably not, since she seems happy with Shawn). Jami, like Kaitlyn, is from Canada, and is a bartender.

This 27-year-old a "chicken enthusiast" from Redmond, Washington. I have no idea what a chicken enthusiast is, but Reality Steve reports that she's also a dental assistant (which is probably what pays the bills).

Jackie is a gerontologist from San Francisco, California. In case you don't know what a gerontologist is, it is a health care professional who works with elderly patients.

Meagan is a self-proclaimed "cowgirl" from Weatherford, Texas. She is 30-years-old.

Samantha is a 26-year-old attorney from New Smyrna Beach, Florida.

Laura is a 25-year-old account executive from Louisville, Kentucky.

You can count on Jessica this season! Just kidding, but she is an accountant (get it?). The 23-year-old accountant is from Boca Raton, Florida, and would probably hate that joke.

Shushanna is also a numbers girl from Salt Lake City, Utah. The 27-year-old is a mathematician.