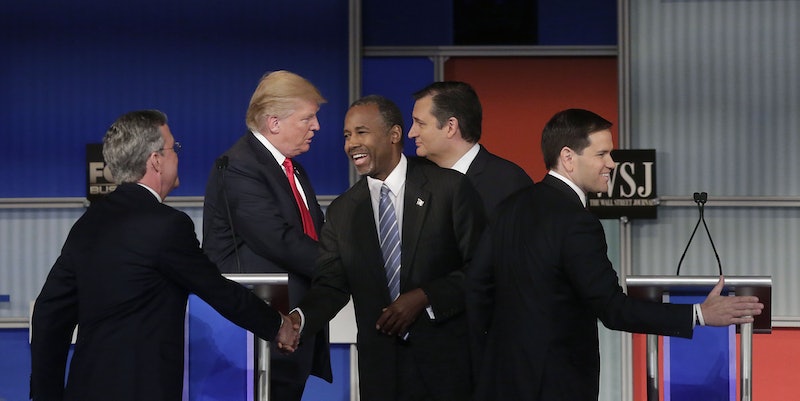 On Wednesday, a mass shooting in San Bernardino, California, left 14 people dead and 17 injured, plus two shooters killed by police. An outpouring of discussion is flooding the Internet, as it does after every high-profile mass shooting in the United States. Perhaps predictably, empty platitudes from friends and public figures alike are flooding our social media streams as well, with people struggling to grasp yet another horrific mass murder on U.S. soil. There are a great deal of "thoughts and prayers" flying around Twitter at the moment, particularly from presidential candidates jockeying for position. But, as the New York Daily News pointed out in a controversial cover on Thursday, "God isn't fixing this."

In a statement made after the Planned Parenthood shooting in Colorado Springs on Friday, President Obama made a direct shot across the bow at those with empty political promises that aren't backed by meaningful steps toward reform, saying: "If we're going to offer up our thoughts and prayers again, for God knows how many times, with a truly clean conscience — then we have to do something about the easy accessibility of weapons of war on our streets to people who have no business wielding them."

While Hillary Clinton and Bernie Sanders both pushed for gun control as they acknowledged the loss of life, Republican candidates by and large stuck with offering their condolences and stopping there, refusing to recognize that the gun control they opposed and have pledged to defeat is precisely what leads to situations like this.

These five candidates want you to know that their thoughts and prayers are with the victims of this dreadful shooting — but their commitment to the sanctity of human life, a much-vaunted cause for the American right, does not extend to gun deaths.

How do those thoughts and prayers stack up against the former neurosurgeon's public comments on gun control? He supports a radical interpretation of the Second Amendment that puts essentially no restrictions on gun ownership, even believing that states shouldn't be allowed to require gun owners to register. He has, however, deigned to admit that perhaps people in urban regions shouldn't be permitted to own semi-automatic weapons, though why they should be allowed in rural areas isn't clear. He's also been outspoken on wanting to keep guns out of the hands of "crazies," reinforcing the incorrect notion that mentally ill people are by nature violent and contradicting his own statement that no American should be forced to give up the right to own guns.

In his book A More Perfect Union, the candidate implied that tight gun control laws in post-WWI Germany were responsible for the eventual rise of the Nazis and the Holocaust. He doubled down on that argument in mid-October, indicating that he hasn't reconsidered his position. And in fact, his claims about gun ownership in Germany aren't accurate to begin with — many Germans had older weapons that were never registered, let alone seized, and by 1938, the Nazis had passed a liberalized gun policy that allowed Germans to own a range of weapons. Unless, of course, they were Jewish.

In the wake of the Umpqua Community College shooting, he suggested that: "I never saw a body with bullet holes that was more devastating than taking the right to arm ourselves away."

Like Carson, Paul's interpretation of the Second Amendment is extreme, imbued with his deep libertarian streak. He argues that all "responsible" Americans should be able to own and carry guns, and has opposed attempts at limiting things like high capacity magazines and instituting background checks. He has closely tied his Second Amendment activism in with Fourth Amendment commentary, arguing that the right to privacy also covers the right to private weapons ownership. The epidemic of violence sweeping the U.S., he says, "isn't going to be fixed by our government."

If you need an illustration of how extreme his views are, even the NRA shuns him.

This Republican candidate has a mixed record on gun control. He's acknowledged that the United States has a significant problem with violence, but has hedged about connecting that violence to gun ownership — guns don't kill people, people kill people, as the NRA likes to say. Like Carson, he relies heavily on the false argument that there's a connection between violent behavior and mental illness and that aggressive persecution of mentally ill people will solve the epidemic of violence in America. However, he also supports laws against conceal carry and bans on semiautomatic weapons. That's earned him a "C" from the NRA, which declined to invite him to 2015's convention.

With gun control a hot topic and many Republicans expressing concern about restrictive gun control, Christie has attempted to rehab his record for conservatives, backing away from his stance on regulation. In addition to fobbing off the blame for some gun laws on prior administrations, he's also suggested that he's hampered by a Democratic legislature — the same one that just overturned his veto on a significant piece of gun control legislation.

Further, Christie believes that gun control should be left to the states, rather than being a matter of federal law, supporting the existing patchwork of state-by-state gun legislation that endangers citizens and law enforcement alike.

The author of Guns, God, Grits, and Gravy carries an "A" rating from the National Rifle Association for his stance on gun control, which largely favors deregulation. Like Carson and Paul, he's been outspoken with suggestions that armed individuals can prevent mass violence, despite glaring evidence to the contrary — as in the case of the armed veteran on Umpqua's campus who never fired a round, concerned that he might confuse law enforcement or endanger someone. He attributed the rise in violence to "sin and evil," an echo of Paul's position that people are being straying from "salvation" and need to be brought back into the religious fold if the U.S. wants to truly solve its violence problem.

If elected, he's promised to oppose gun control laws while "protect[ing] gun owners from big government." His stance isn't surprising in light of the conservative view on the Second Amendment in the United States, with most candidates agreeing that it refers specifically to the right to individual ownership (rather than that of, for example, a well regulated militia) and arguing that it guarantees ownership rights with no restrictions. The candidate is also a fan of Castle Doctrine ("stand your ground" laws), which absolve citizens of liability for killing people if they "fear death or great bodily harm."

After the Umpqua shooting, when the president weighed dealing with obstructionism on gun control by issuing an executive order, Huckabee encouraged gun stores to ignore it.

Bush bears the dubious distinction of being the one who signed Florida's Stand Your Ground law, a groundbreaking moment in the United States. That law, attentive readers may recall, was used to justify the shooting of Trayvon Martin, an innocent teen who was carrying a bag of Skittles at the time of his death. For this and other acts as governor, he's earned top marks from the NRA, making him a popular guest at this year's NRA convention.

Bush evidently feels that "Islamic terrorists" are more of a threat than "law abiding Americans," despite the fact that 406,496 Americans died in gun violence between 2001 and 2013, while only 26 Americans have died on U.S. soil since the Sept. 11 attacks as a result of Muslim extremism. He's also boasted about his record on guns, suggesting that gun control favored by Democrats and advanced by the president wouldn't have prevented a number of terrible mass shootings.

He's particularly infamous for his "stuff happens" remark in response to the Umpqua shooting. Obama's response was rather crisp.

My thoughts are indeed with the victims and others affected by the shooting in San Bernardino today, but so is my commitment to gun control — I'll keep fighting for reform, whether it's contacting representatives, canvassing for campaigns, or being outspoken on the need to address the epidemic of gun violence in America. Because just thinking about it isn't enough, and I hold elected officials to an even higher standard. If you want to earn the vote, you need to show me how you'll act in office to address the gun crisis.

Here are some gun petitions you can sign now, and more ways you can advocate for gun control.