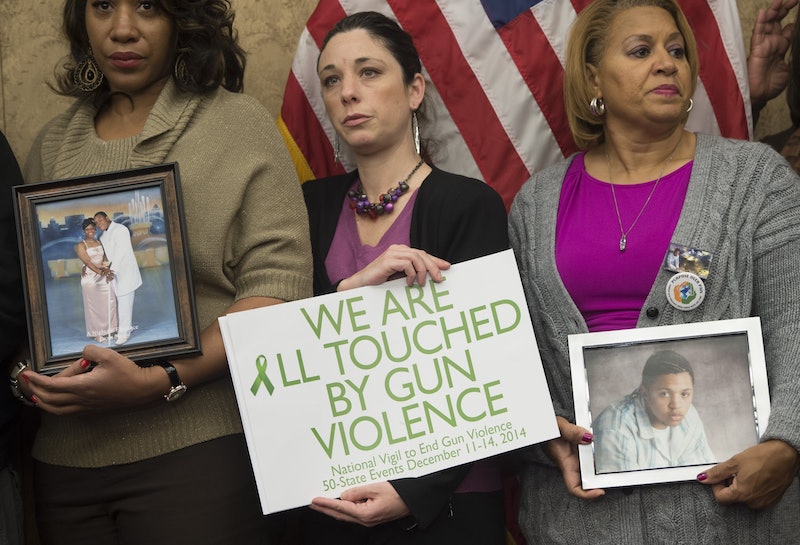 It's certainly hard to believe, but, despite the rash of gun violence that has plagued the United States in the last year alone, the fight for stricter gun control is still an uphill battle. Sadly, the most recent event of this nature, a shooting in San Bernardino, California might not even be the event that pushes more people into opening their eyes to this pervasive issue. In the meantime, those who see the need for stricter gun control, and, more importantly, want to do something about it have a lot of options. If you want to support gun control right now, then there are numerous resources that you can turn to in order to make it clear to your local and national government that you stand against gun violence — Second Amendment or no Second Amendment.

If you want to make a change, you certainly wouldn't be alone. Many politicians such as Hillary Clinton and Martin O'Malley, as well as celebrities like Amy Schumer and Rose McGowan, have taken strong stances against gun violence after such tragic events as the Umpqua Community College shooting, the Planned Parenthood shooting in Colorado Springs, the Louisiana Theater shooting, and many, many more similar tragedies. While the first move when it comes to activism is always to educate yourself about the issue that you are advocating for or against, the next step is to take action.

So if you're so inclined, try some of the methods below to make your voice heard before another gun violence tragedy occurs.

The United States is home to a wide variety of gun control advocacy groups, full of like-minded people trying to get their own voices heard. Among them are the Coalition To Stop Gun Violence, which "[seeks] to secure freedom from gun violence through research, strategic engagement and effective policy advocacy," and the Brady Campaign, which aims to "create a safer America for all of us that will lead to a dramatic reduction in gun deaths and injuries." Both organizations clearly outline on their websites not only their mission statements, but also the methodology they're pursuing to create safer communities and the actions they have taken — both successful and unsuccessful — toward their goals so far. Other groups include Everytown For Gun Safety and American State Legislators for Gun Violence Prevention. Researching each advocacy group will help you find the one that's right for you, and take the first step toward getting involved.

Considering there was once a petition for President Obama to build a Death Star replica that made it all the way to his desk, it might seem pointless or even ridiculous to think that a simple signature on an online form might be able to make any kind of difference. However, the White House website allows people to either sign or create their own We The People petition with the knowledge that it will be read by the government if it meets the signature threshold of 25,000 names. Sure, gun control petitions have made it before Congress before, and the White House website has a page dedicated to their focus on gun control and previous ways they have worked with petitioners in the past, but that was the past. It's never too late to launch another petition, especially as more and more tragic examples of the need for stricter gun control arise.

Write To Your Congressional Representative

You can fight for gun control from your house by simply contacting the people who are fighting for your rights in Washington D.C. The House of Representatives' website makes finding your congressperson incredibly easy, and then gives you the option of reading up on your congressperson and then emailing them straight away with your concerns. It might be easy to think that this is hardly the fastest way to have your voice heard, or that your congressperson receives so many requests per day that it's impossible that they'll ever see yours, but just having sent a letter is a step in the right direction. After all, you only fail if you never try.

Awareness is a step as important as any other, and we live in a world where people are able get their thoughts and opinions out faster than ever before with the simple press of a button. Tweet at politicians, jump into a hashtag, use Instagram, Facebook, Tumblr, etc, to show your support for the families of the victims of gun violence and to make it clear that you stand for stricter gun control right now. Sure, your voice might just be one voice out of the millions on the Internet, but that's how trending topics happen, that's how people band together to change the world, and that's how an issue remains visible — because people are talking about it.

The race to the White House has begun, as even more people across the country know from the sheer fact that Donald Trump is in the running. Naturally, all of the Democratic and Republican candidates have had to make their stances on gun control known. There is no better way to have a say in the way the government is handling gun violence than to vote for the presidential candidate that you feel best represents your interests when it comes to this incredibly important issue. Even the Democratic candidates have differing opinions and strategies about the way they plan to handle gun control — not to mention the fact that they have taken differing stances on gun control in the past — and educating yourself about who will be running our country for the next four years, and what they plan to do about this issue, is just another way to have a voice.

These methods might not seem like much, but even the smallest of actions can have the largest of impact — especially when done by a group. Educate not only yourself, but the people in your lives, about the necessity for stricter gun control, and one day we might live in a country where events like San Bernardino never happen again.