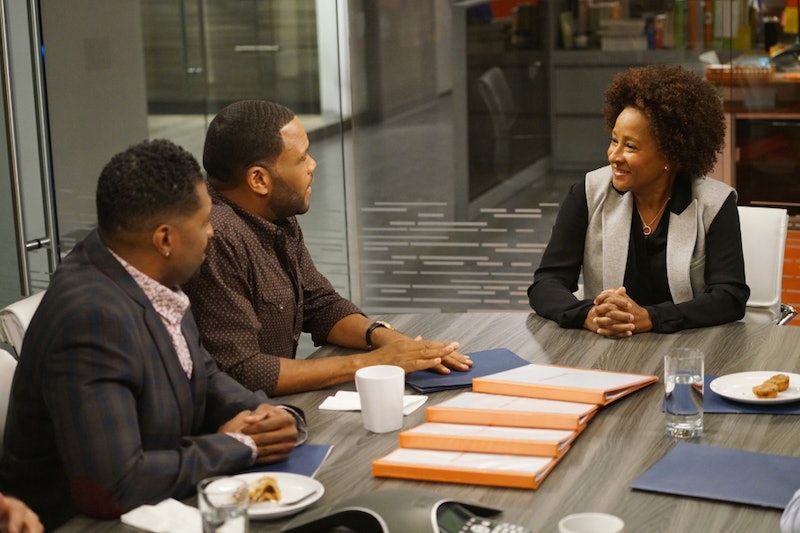 The opening monologue of black-ish's post-Thanksgiving episode has a message that feels like an extension of the holiday's thankful, giving message. "Never forget where you came from," says Dre, "And never, ever forget the people who helped you rise." There's been a good number of guest stars this season, but Wanda Sykes guest starring as Dre's boss proves that when you go for a real comedian, you get even better results. The show struggled a bit with incorporating guest stars in the past, but Sykes, along with Dre's childhood friend Sha, played by Faizon Love, are both fantastic.

By the way, a week off did the show good. Bow had some sharp jokes, particularly her disdain for Sha for going full hobo rather than just keeping things slightly crunchy (she is a reformed hippie, after all). And Tracee Ellis Ross' epic monologue about how none of her children are talented enough to be starving artists is the definition of tough love.

Dre struggles with the balance of supporting "your own" and indulging them. Sykes plays Daphne, a divorcee who managed to walk away with half of the company where Dre works, and promises to "shake things up." And Charlie's assumption that because Daphne lived in France that he'll be living life on easy street is fantastic (nice to give his rivalry with Diane a rest, and bring him back to the office goof). And when Dre spots him napping with his sleep apnea machine on, he tries to motivate his coworker into performing better. And while conventional methods only serve to make Charlie confuse "pita" with "PETA," Dre is ultimately able to prove that he's valuable.

The way Daphne ultimately changes her mind and decides to value her staff, followed by Charlie leaving the company, potentially sets up Sykes to be the funniest character in the office. Bidding Deon Cole goodbye so soon feels like a shame, but hopefully that's because he's off to do something that will showcase him even better. In the meantime... Sykes will ably fill his shoes. Though it's no surprise, since she was great on Curb Your Enthusiasum, great on The New Adventures of Old Christine, and basically everything else she does.