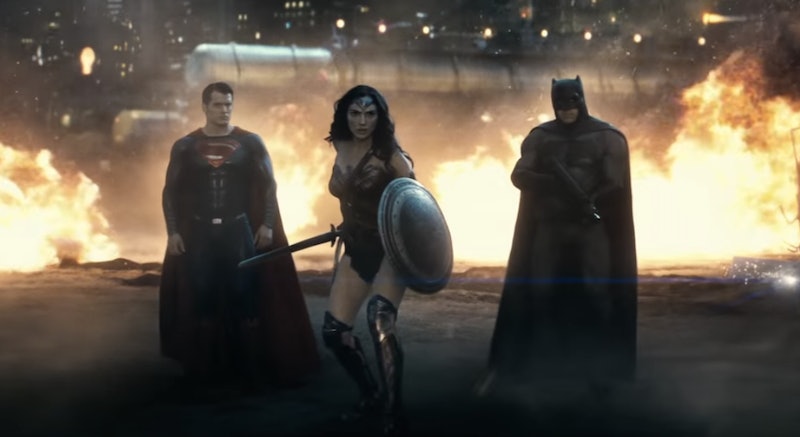 The world is in a state of various emotions on Thursday after the premiere of the new Batman V Superman trailer on Jimmy Kimmel Live. Although we were all warned that the trailer was coming, none of us were truly prepared for all of the new footage — including shots of Wonder Woman and Lois Lane, the real heroes of this movie — that would be assaulting our eyes in the best kind of way. We were also introduced to the villain of the piece (Doomsday, not Lex Luthor), and got to see more of the feud that develops and escalates between Batman and Superman, Bruce Wayne and Clark Kent, for various reasons up to and including one very tense first meeting. However, something that many might have missed is all the different ways that the Batman V Superman trailer sets up for the Justice League movie that's coming our way in the DC Cinematic Universe.

I don't blame you if you were too busy watching the trailer again and again on repeat to really let it sink in just how many elements leading into the future Justice League were being presented to us in this three minute clip. I had that problem as well, at first. But as someone who literally screamed when Wonder Woman was on my screen, I feel it's my solemn duty to clear up any confusion, and give people even more reasons to be excited about this film and its place in DC Canon. Here are seven ways the trailer sets up the Justice League.

1. The Appearance Of Wonder Woman

Like I said, I screamed. Wonder Woman is, of course, one of the Big Three and founding members of the Justice League, so her appearance in the trailer is one of the biggest ways this serves as a lead-up into the Justice League film. The fact that she appears by saving the boys from danger is just a bonus.

2. An Enemy Too Big To Fight Alone

The feud between Batman and Superman seems to come to a screeching halt when Doomsday shows up, and suddenly the two heroes have to band together to defeat their new enemy before they can go back to trading blows. The Justice League is a superhero team basically founded in the need to take down enemies that were too big for any one hero to fight alone, so this can be considered basically their first adventure.

3. Sharing Enemies Across The Citiies

Hi, Lex Luthor. This notorious pain in Superman's side becomes a pain in Batman's side as well over the course of the trailer, because Lex Luthor is not about Superman using his alien powers to dominate over humans. No, sir, not at all. The fact that Lex Luthor becomes such a threat that he's a danger to both Metropolis and Gotham is just another day in the life of the Justice League.

Nothing says there's a misfit superhero team movie coming like everyone meeting everyone else. Just check out The Avengers.

5. People Are Scared Of The Superheroes

Awed. Scared. Worshipful. Angry. People have a lot of strong emotions about superheroes, which is another thing that can alternatively help or hurt them going forward, and sets up for a lot of team plot stories in the future cinematic canon.

6. Secret Identities Are Being Revealed

In the trailer alone, Superman discovers that Bruce Wayne is the man behind the Bat, and I can only assume that Bruce eventually learns or figures out that Superman is just Clark Kent without his glasses on. Once you've revealed your secret identity to another superhero, you basically have to be friends for life.

Lex Luthor's master plan in the trailer is so big that it required three heroes to fight it — and it still failed. It's not a stretch to imagine that his plans to take down Superman in the future will get bigger and bigger as he gets balder and balder until, say, anywhere between five and seven superheroes are needed to take him down. In, say, a Justice League movie. Boom.